The equity markets looked locked and loaded to test their crucial supports and they did just that. The S&P 500 (SPX) tested the 2550 level and the Nasdaq the all-important 6495 level, both markets saw minor follow through, writes Nell Sloane Wednesday.

All eyes are dependent upon what the Fed does on Wednesday as the markets still see around a 68% chance of another 25bp hike.

We read in the WSJ on Monday an op-ed commentary from Stan Drunkenmiller and Kevin Warsh and it can be summed up via this quote, “the central bank should pause its double-barreled blitz of higher interest rates and tighter liquidity.” As much as we respect the both of them, we disagree whole heartedly.

The mistakes of the past will not be rectified via further mistakes in policy and in order to purge the leverage and the incessant risk chasing that has become pervasive throughout our financial markets, interest rates should and must rise.

We have said it for years now that the Fed Funds must rise to meet U.S. 10-year yields in order to stem excessive speculation. One thing we did agree upon was the fact that the Fed missed its hawkish chance in the early 2000s which led to the housing crisis. But now, we would rather see the Fed Funds rise toward that 10-year rate and we think it will get there in Q1.

The equity markets continued to hold up on the shoulders of both record dividend payouts as well as equity buybacks. Whether or not this makes good corporate treasury sense or not will soon be judged, but for now, its effect has most likely stymied an even sharper sell off.

U.S. companies within the S&P 500 have spent $421 billion as of Q3 2018 on dividends, surpassing last year’s total of $420 billion. (WSJ) Toss in the record number of quarterly buybacks in Q3 of $203.8 billion putting the yearly total of buybacks at $583.4 billion, with Q4 still in the wings, then you begin to see exactly where the monetary inflation is hiding. (WSJ)

So, you see dear reader, these are just some of the data points we would use in order to back up our claim as to why we think the Fed should continue to raise rates.

It seems as if central banking now is more akin to raising asset prices at all costs and avoiding any sort of pullback in said assets. The central banks create this illusion of independency when in reality, all they do is pass the baton.

All the while creating a very large divide between classes. No wonder the populist movement is gaining a foothold worldwide, can you blame them?

So, with all this in mind, we feel the Fed will raise 25bp Wednesday. If they do not, we suspect that bonds will be well bid, the U.S curve will steepen smartly and even the equities may take it as an initial sign to run up.

We say initial sign for the equities because the real signal that the Fed would be sending, after the AI and headline reading bots hit the buy all button is that the Fed’s rate hikes are over and the economies have turned south.

This should cause a greater need to discount future cash flows and equities should continue to falter. In fact, just after the close today, the equity markets sold off on the heels of FedEx (FDX) slashing its adjusted earnings targets, citing that, “Global trade has slowed in recent months and leading indicators point to ongoing deceleration in global trade near-term.” (Zhedge) Signs of things to come?

efinitely, but is it enough for Powell to cave? We doubt it!

Ok, so let’s hit up some charts! Since the Fed is on tap tomorrow let’s look at the bond markets first, here we see the U.S. long bond and the level we continue to watch is 144-21. We suspect some trend followers are waiting in the wings to jump on this train: 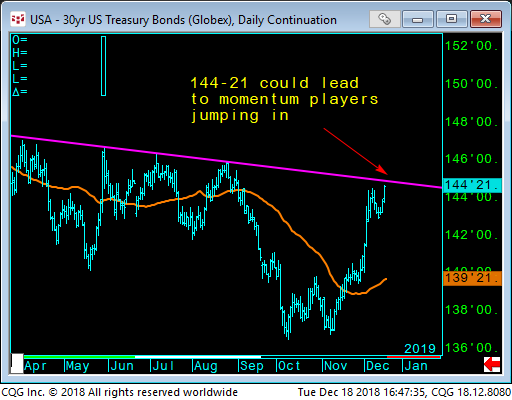 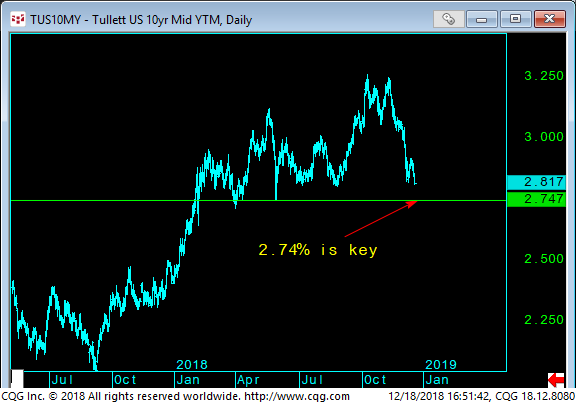 We have one more year before the end of the decade. The last 3 decades have all started out with lower 10-year yields than where they started. We suspect this decade will be no different. In December 2009 U.S. 10-year yields were 3.85%. Considering we are nearing the end of the Fed hikes and we are already 100 bp below…you get the picture #QE4EVR

As for the equity markets, first up the Dow, after breaking the trendline, we still think another 1000 points below here seems logical: 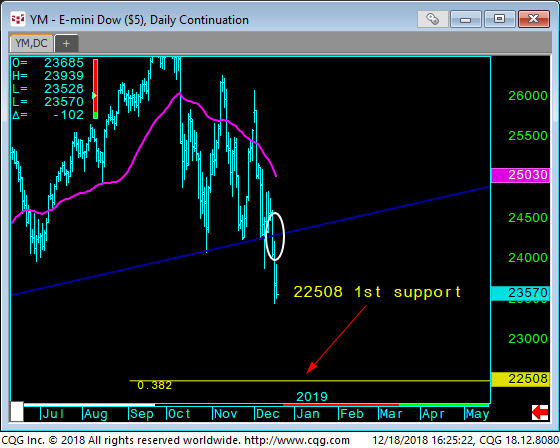 The Gold market has looked pretty decent and once it broke back above the $1232  level, it gave the bulls another green light, $1296 seems logical. 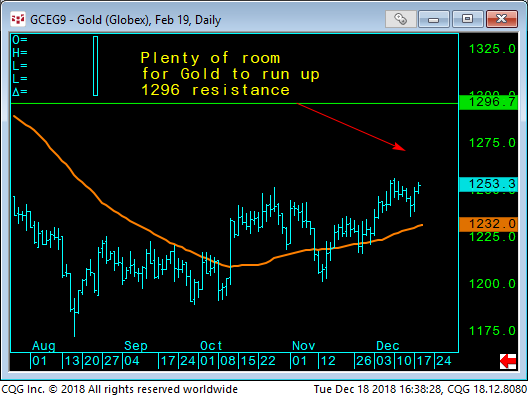 Ok, that’s all we have for you this week. We hope you received some information that you may not have been privy to already. We thank you for reading and remember with the Fed’s decision be on the lookout for any change in their direction or their sentiment. We may be witnessing the last few hikes for another decade.