Considering the absolute about face the Crude market has done this year, we have to opine just a little bit here. We have heard all sorts of production excuses, OPEC arguments as to why Crude basically fell out of bed, writes Nell Sloane.

Yet we aren’t sure what is the true reason. Could it be that the energy markets are also discounting a global slowdown? This certainly makes sense and so too does the fact that the United States is now the leading producer of oil.

In fact, the United States produces nearly 30% more than Saudi Arabia, can you believe it? Did you even know that? The Energy Information Administration states that the U.S. produces 15.6 million barrels a day compared to 12.1 million for SA. (EIA.gov)

Considering this fact and considering this trend is going to continue, perhaps that is more of reason why Crude (in this next chart) showing the February futures contract has declined from a high of $76.52 down to its recent low of $42.32 a loss of nearly 45%.

Just to put this into perspective, Crude oil was up 35% for the year and is now down 22%, what an absolute whipsaw! If we stick with our global slow down theme, we should see Crude trade around the $50 level for 2019 most likely capped by that 2018 high of $76.

Under $40 and we start to see some other dynamics at play, most notably leveraged producers and their debt piles being once again called into question. So not that we expect a prolonged protraction, but when leverage gets tossed into the mix, fire sales can drive prices certainly below fundamentals: 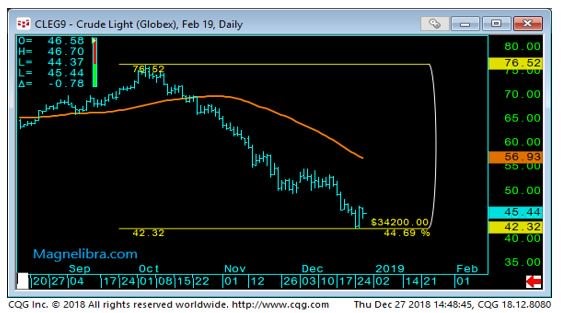 We feel that 2019 will be a great year for the metals market. Gold continues to shine and looks to be in a clear uptrend since the August lows.

All this amongst a hiking Fed which has also seen the U.S. dollar (USD) maintain its strength. The year 2018 has basically been one big down move in the complex, but the last few months it seems the complex has carved out a nice base and continues to rise.

In our most recent note, we highlighted the fact that Gold has been moving higher relative to Silver and recently hit the high of the year in this spread. Noting the double top and prior resistance, Silver has regained some footing vs. Gold as depicted in this chart: 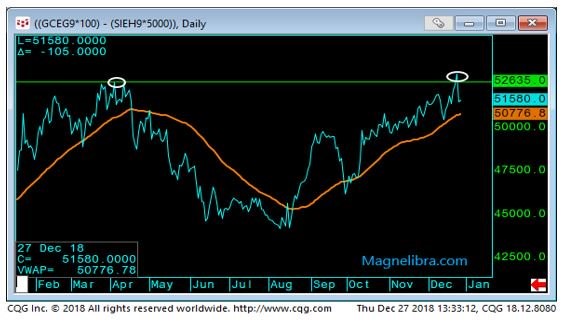 Cryptos: In what seems to be a bizarre and overwhelming contrast in respect to Cryptocurrencies this year from last, we can’t help but comment on the digital asset sector.

As 2017 came to a close, it was all euphoria in the space and then the floor just absolutely fell out from under it.

The speculators who drove the pricing to exponential heights were taken out feet first with damage so swift and severe many would never recover.

Yet we are still bullish on blockchain and its decentralized nature. Innovation in the space will continue and the future will most definitely incorporate blockchain in it one way or another.

As far as treating these assets like financial assets, we can’t help but admit our disdain for such folly.

Cryptocurrencies never will be financial assets to be swapped for fiat, that is simply a Wall Street incarnation. Rather they are designed as a function of a particular decentralized payment or information system.

The titan of these technologies, continues to be bitcoin (BTC-USD) Even after all the damage in 2018 it currently trades at $3600.

Many will say it is finished, it’s worthless, it is down 82% off its highs.

If you take that perspective then yes, we can see the doom. Instead, how about we take a different perspective and say, it’s been around for a decade now, it trades at 3600x the U.S. dollar and it’s up 21% from September 2017.

What people fail to realize is that bitcoin is not an asset in a financial sense to be swapped for fiat. It is a technology whereby the required cost of usage is bitcoin itself.

Now we know the SEC has failed to pass any true merit tests in regard to bitcoin ETFs, but they do so at the request of undoubtedly the Federal Reserve itself.

You see dear reader, bitcoin is a competitor to fiat money, plain and simple and it is in that fact alone that all necessary measures will be taken to insure it never becomes mainstream.

That covers most of what we expect from our financial market perspectives. The other things we are keeping an eye out for in 2019 are more scientific in nature. Some of the key words you should be aware of are, grand solar minimum, cosmic rays and plasma physics.

Expect climate change to be placed at the forefront, not because we can actually do anything about it, but because the natural cyclicality of our climate is about to make a drastic change.

They want people to be aware of these changes and they will most likely have a great effect on the volatility of our weather and stress on our food supplies and power grids as well. Humans often neglect out of sheer hubris that giant ball of hydrogen plasma in the sky, it has the final say in our temperature, as for humans, well, the great George Carlin said it best:

Be on the lookout for increased volcanic activity, all of this is related in some way, so we want you to be aware of it. You have been sold that the Earth is warming, but like markets, the Earth has cycles as well, periods of warming and periods of cooling. Our job is to pique your interest in things we believe matter, and these things matter!

We hope you have a very safe and joyful New Year, cheers!