The Bond Market May be Key to Cycle

Equities still have not made up Q4 losses and the clock is running, says Jeff Greenblatt.

On my way to the Traders Expo in Las Vegas I heard Peter Eliades state the period from late last year until June 2019 was going to be the best part of the Presidential cycle. His concern as well as others was how would the bear phase that already started in October interact with the best part of the four-year cycle. Fast forward to March and I met Jeffrey Hirsch at TradersEXPO New York and he agreed, but took it one step further. He stated he’s the one that likely came up with that viewpoint. I have no doubt he’s right given the great work he’s done through the years with the Stock Traders Almanac. When it comes to Presidential cycles, he’s the man.

I bring those gentlemen up because those of you who follow my work know I don’t claim to be an expert on Presidential cycles. I’ll take their word for it. That being said, we now only have two months to go and since October most markets have made no net gain in the best part of the cycle. Using a football analogy, let’s say the Jets are playing the Patriots. They dominate the first half yet only get four field goals while the Patriots manage one touchdown. That means for all the domination all the Pats need is a touchdown to take the lead.

That’s where we are at with the markets. The best part of the cycle is nearly over and there is no net gain. The markets have been great this year and many are ready to throw caution to the wind again. Enter the bond market. Just the other day bonds started selling off, and if it continues, one of my 2019 scenarios could come to fruition. We are in a position with the bond market where it is sitting in the catbird seat. Heads he wins, tails we lose. Just a couple of weeks ago the yield curve inverted as longer-term rates started coming down with the acceleration of prices to the upside.

Let’s say the bond market does top here. Let’s say there is a rotation out of bonds and into the stock market. That would mean for the time being stocks would continue to go higher, but the collateral damage would be lower bond prices which would be an acceleration of intermediate to longer term interest rates. Just when everyone thought they were in the clear as the Fed turned dovish. The problem the crowd wasn’t looking at is the Fed has no control over long-term bonds (see chart below). 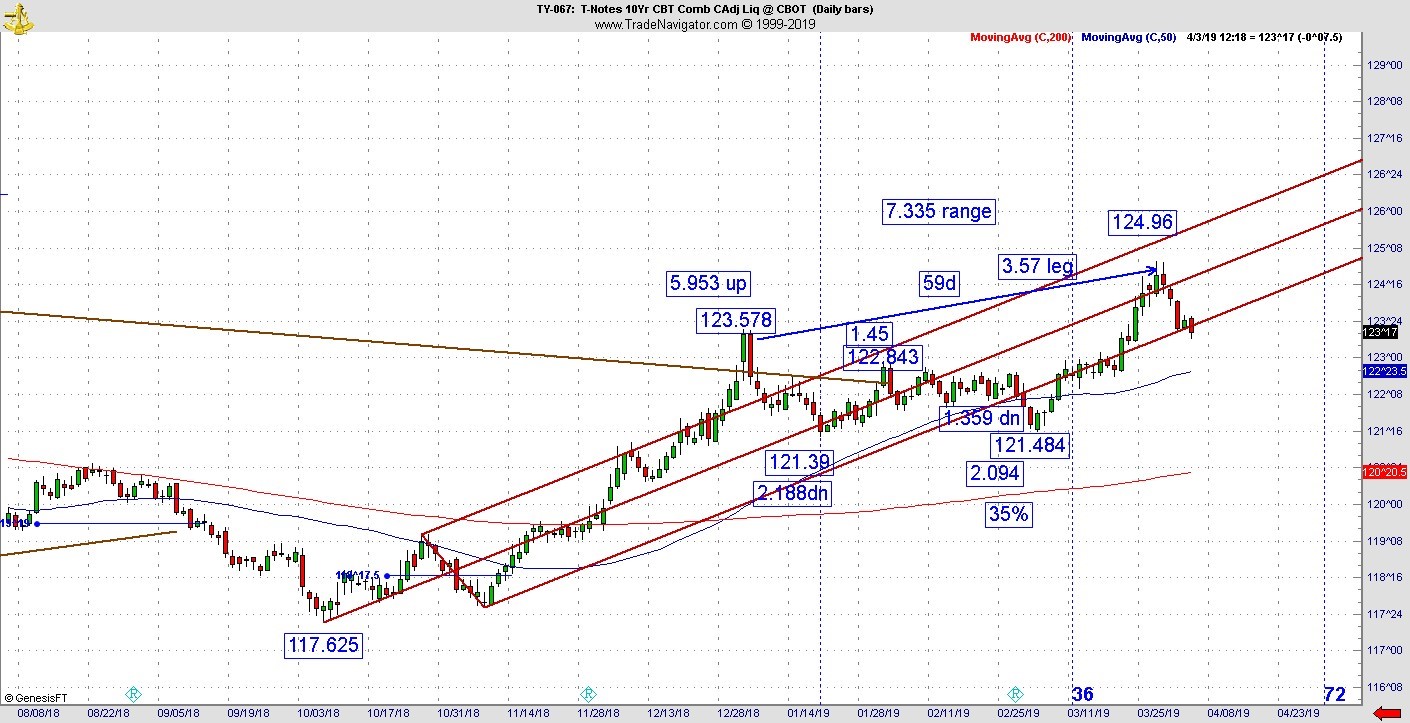 Then you can’t say I didn’t warn you. We had the seasonal change point along with the Fed statement a couple weeks back. The Friday after that sequence the market had its biggest selling day since the bear phase last year. It looked good for bears except for one thing— the bulls had one ace left up their sleeve — the Monday following that selloff was day 61 off the bottom. It’s possible the golden spiral 61-day cycle could invert. That was the only thing preventing a return to the bear right then and there. But the buyers had to come in. They had one ‘out’ left. They took it and the stock market has been better ever since. Now its threatening to retest the top.

Why not? We are still in the sweet spot of the four-year cycle, although it is the back end. The problem is what happens after this cycle ends. Geopolitical risk is very high and everywhere we look, we see a potential crisis. There are so many hotspots in the world that it would be hard to quantify any of them as a black swan. But you know how normalcy bias works. People don’t see a problem even as it is staring them right in the face. Most economists will project the next 12 months based on the past 12. All I can tell you is once we get the beyond the ‘sell in May and go away’ we could have an entirely different environment. What has happened with the bond market is this rally has at least a few more weeks to go if for no other reason, there is going to be a rotation out of bonds. It is already likely happening.

So, let’s take a brief look at the Kairos of the 10 year. With a first major leg of 5.953 (59 vibration) its 59 days to the high. The last leg is 3.57 up after a 35% retracement. There are other symmetries here and on the long bond as well. Most importantly it is working and now starting to violate the Andrews channel. What we have is at least a change of direction of near to intermediate term. My problem lately is these vibrations tend to do better than I think they will. I’ve underestimated their power. So, let’s just say the action gets anywhere near major support from last October. We will see headlines concerning interest rates inching higher. Nobody knows where the breaking point is, but I do know the last time the bond market was that low, there was enough panic to get the market to start selling for real. Enjoy the stock market while you can because odds increase there will be collateral damage later in the year.