In yesterday’s FOMC preview report, we noted that we were unlikely to see any immediate changes to monetary policy, apart from a possible technical tweak to the central bank’s interest on excess reserves (IOER).

As it turns out, that’s precisely what we saw, and not much else. In a unanimous vote, policymakers decided to leave the primary Fed Funds rate unchanged and cut the IOER by 0.05% to 2.35%. Beyond that, the central bank made several minor tweaks to the first paragraph of its monetary policy statement:

With little else to go on, we expect the downgrade to the central bank’s inflation assessment to take center stage in Chairman Powell’s upcoming press conference. 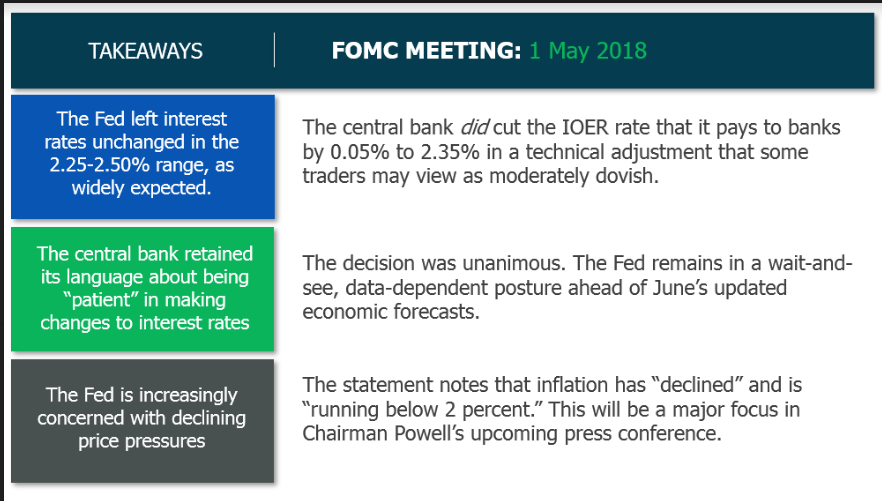 The initial market reaction has been somewhat subdued, reflecting the minor tweaks to the statement. That said, we have seen continued weakness in the U.S. dollar, with EUR/USD tacking on 20 pips from pre-release levels. The biggest move has been in short-term Treasury bonds, where the two-year yield has shed a quick six pips on the IOER adjustment. Looking ahead, Fed Funds futures traders are now pricing in 75% chance of an interest rate cut by year-end, up from about 65% yesterday. U.S. stovck indices, gold, and crude oil have all seen minimal reaction to the release so far.