Trump's Sunday Tariff Surprise May be a Game Changer

I was reasonably positive on the stock market until mid-day Sunday based on what seemed to be increasing upside momentum and subtle but hopeful changes in the housing and restaurant sector which suggested consumers are resting a bit easier at the moment. But after President Trump’s tariff threat against China, we’ll have to see how things develop.

If there is a positive in all of this, especially if it turns out that the rally is over after Trump’s remarks, the Federal Reserve is not likely to raise interest rates this year, especially after the recent purchasing managers and ISM data that show that the U.S. economy’s growth rate is slowing, despite better than expected employment numbers. This is especially important if the stock market enters a bearish phase as it could mean that bonds become the momentum instrument of choice.

Of course, Powell might have been trying to herald his independence and might have made his bearish remarks after the Fed’s recent meeting in response to President Trump and Vice President Pence’s call for lower interest rates. Indeed, in hindsight, the remarks by the president and the vice president seem a bit more loaded now after Sunday’s announcement and the immediate sell off in the overnight futures. Moreover, as the Fed and the White House sound off about monetary policy, the real question for stock traders is whether there is still enough punch in the bowl to keep bidding stocks up once the dust clears from this, if it does.

The answer to what the Fed will do is yet unknown and thus much may depend on what happens with the China trade talks in the next couple of weeks, despite Trump’s remarks which could be a negotiating ploy, as well as the general direction of upcoming economic data. Thus, if it is still plausible that the White House can come up with a credible enough deal with China, the market rallies back, and the economy shows sign of stabilizing or picking up slightly. In that scenario the Fed may have room to leave rates unchanged and the headline reading algos would get the go ahead to bid stocks higher.

However, if the China talks completely fail, which could happen as early as this week since there are high level meetings scheduled later in the week, and the market continues to fall, investors would likely look to the Fed for reassurances. This could be in the form of a statement that the central bank will ease if needed. The down side is that if the Fed has to come out to rescue the markets, they may be too late, and the market may not be listening anymore as everyone is rushing to the exits.

Given the tenuous macro landscape, it’s interesting to note that up until Sunday, there were two market indicators that may be flashing positive signals. Specifically, the action in the SPDR Homebuilders ETF (XHB) has been encouraging, behind better than expected news from a smattering of homebuilders such as Lennar (LEN) and KB Homes (KB), two homebuilder stocks near their 52-week highs. 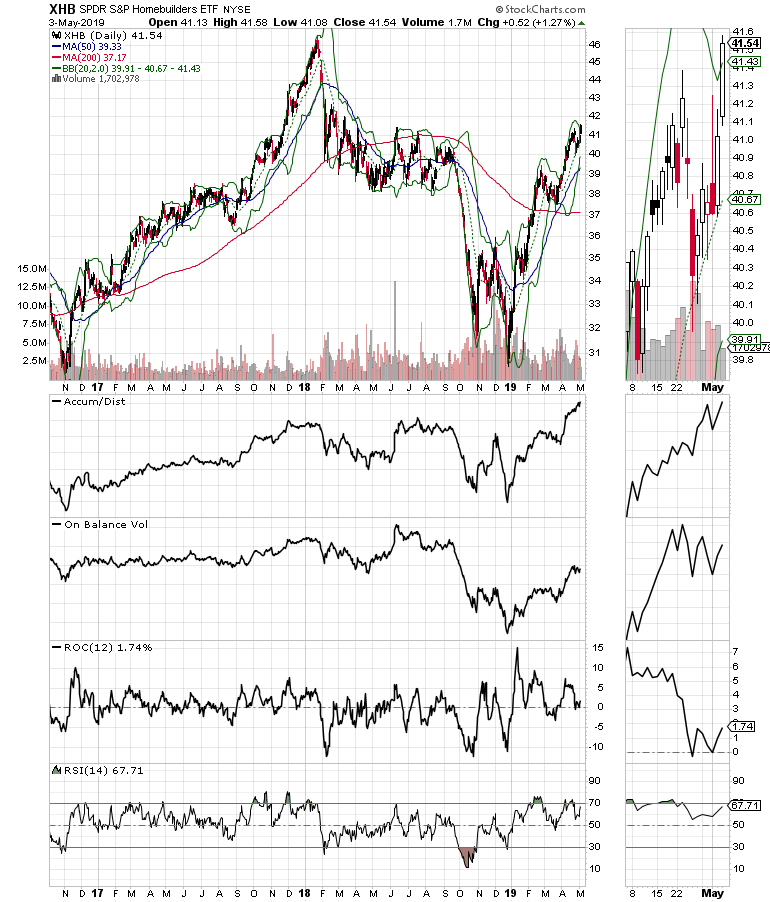 Anyone who follows the housing market is familiar with the way the sales figures and mortgage applications numbers have fluctuated in response to interest rates over the past few years. Indeed, when rates start to fall mortgage activity picks up, often with refinancing leading the way. On the flip side, when rates rise, the housing market stalls and refinancing dries up. Note the inverse correlation between the U.S. 10-year Treasury note yield (TNX) and XHB in the nearby charts. Perhaps the most positive aspect of these charts is the failure of TNX to remain above 2.5% this past week, and its subsequent reversal to the down side. That suggests that the bond market is not worried about inflation and considers the Federal Reserve as currently being all talk. 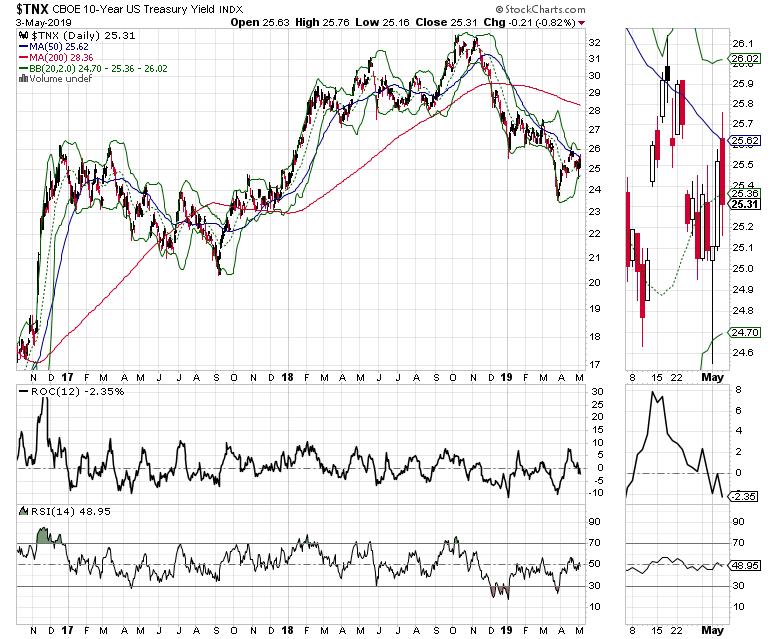 Fundamentally, stock prices have responded positively to better than expected corporate earnings and forward guidance of late throughout the market. Specifically, consider the message from the restaurant sector, an indirect measure of disposable income and consumer confidence, where Ruth’s Hospitality Group (RUTH) recently met its earnings expectations on rising revenues and the stock rallied after a lengthy consolidation.

I recommended RUTH in February and the stock is up nearly 15% since then. Accordingly, the key metric for RUTH was a rise the amount of money spent per ticket by its customers. That’s a sign that people are spending money with a bit less fear than in the recent past. In fact, restaurant traffic in my neck of the woods, Dallas has been very steady of late, which is something rare during periods of rising gasoline prices which we’ve seen recently.

Why Does This Matter

Consumers, because much their net worth is now based on the fortunes of their 401(k) plans and the value of their homes, are very much in tune to the daily changes in the stock market and the effects on their investments when the Fed acts. Moreover, it’s hard to ignore Trump’s tweets and the effects they have on the markets and the general state of affairs.

The markets, and the algos up until Sunday, were in tune with this dynamic and were betting that we are in an economic climate where consumers are starting to feel fairly good about life and will continue to spend, thus continuing the trend toward higher corporate revenues and earnings.

Because of this somewhat fragile connection between real life and the financial markets, if the Fed turns hawkish and the bond and stock markets hiccup, as they might after Trump’s Sunday surprise, consumers could get spooked, start to pull back on their spending, and set off a negative chain reaction similar to what we saw in Q4 2018. That seems to be less likely at the moment than the bears expect. But there are no guarantees, so it pays to continue to monitor this situation.

Momentum was behind Stocks

The New York Stock Exchange Advance Decline line (NYAD) powered higher to end last week and remains the most accurate indicator of the stock market’s trend since the 2016 presidential election. Unfortunately, the line moved outside its upper Bollinger Band on Friday which means that momentum might have been getting unsustainable in the short term. That one factor could mean that the down side risks, now that Trump hit the skids on trade with China, might increase rapidly. 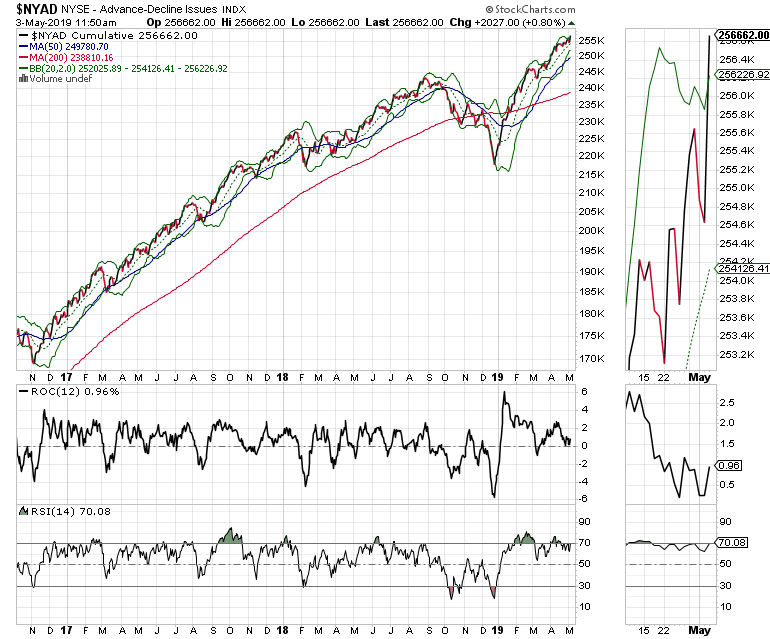 Meanwhile the S & P 500 (SPX) and the Nasdaq 100 (NDX) indexes were within a hair’s breadth of their all-time highs. This is likely to change rapidly in the short term. 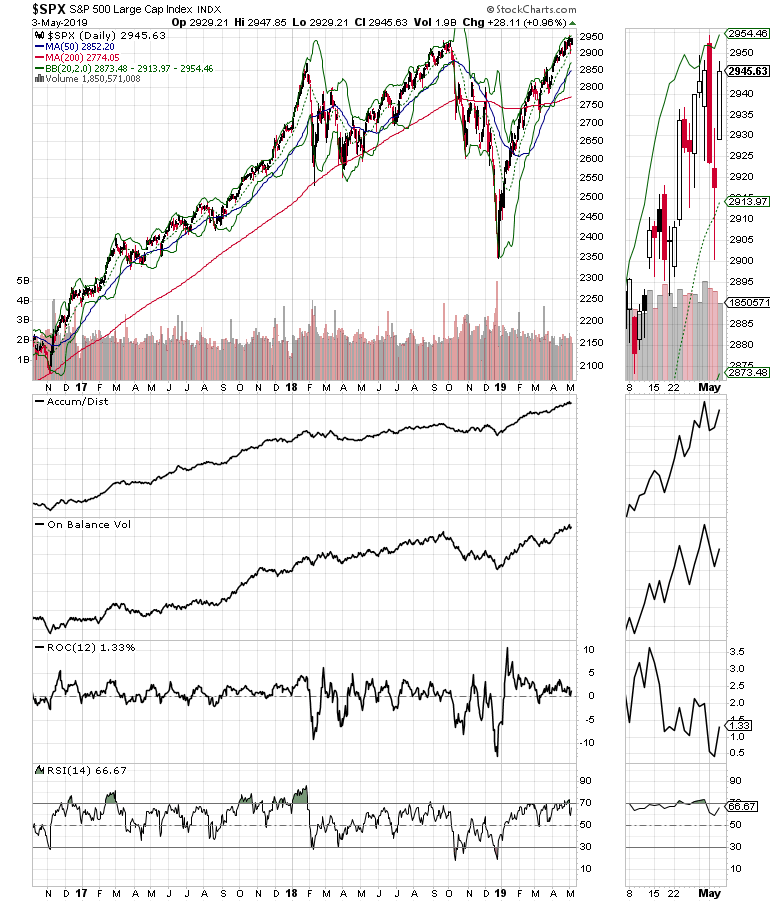 Internally, both indexes were sporting supportive Accumulation Distribution (ADI), On Balance Volume (OBV) and rate-of-change (ROC), which measures momentum. The unifying feature is that all three oscillators recovered from the prior week’s weakness, which was a hopeful sign before the events on Sunday.

So, for now, all we know is that last week was a good week but that the new week will be very volatile.

Staying with the plan

The macro landscape might have changed and the stock market which was being pushed higher by momentum trading algos based on the headlines now looks set to take a fall, at least in the short term. The dips were being bought. The market was making new highs. And the rally seemed to have some legs. But now that may all have changed.

As a result, all we can do is to let the market get us out of positions via our sell stops and wait to see what happens.

My new book, “The Everything Guide to Investing in Your 20s & 30s,” released on May 7, 2019, is a great graduation present and a great reference for any new investor in a household. Reserve your copy now.