While stocks appear under pressure, Joe Duarte suggests letting the market decide if this is a short-term correction or the beginning of a larger move and, in the meantime has three investments that are working in this environment.

The financial markets are bracing for impact as newly announced U.S. tariffs on Mexico and India combined with a new round of rising China tariffs make for what could be a dangerous week in the markets. Add a big dose of economic data including both private and government employment report, U.S. PMI data, the Fed’s Beige Book and President Trump meeting Queen Elizabeth, and it could very well be story time.

No doubt the current market is pretty skittish, but it seems as if it could be worse. Presently, falling bond market interest rates seem to be slowing down the rate of descent of stock prices; otherwise this selloff would likely be much worse. But as things stand right now the fact that the Fed isn’t raising rates is cold comfort and not much to hang your wallet on. Clearly the markets are trying to force the Fed to lower rates sooner rather than later. But the central bank moves at the rate of a dying glacier while the markets move at the speed of light, which means that if and when they act, a lot of damage may have already been done. Unfortunately, as things stand the market’s daily grind will likely be related to interaction between the algorithms, the headlines, and the politics of the moment.

It certainly didn’t take long for things to change. Just a few weeks ago, stocks were moving nicely higher. But as with all momentum runs, the trend rolled over and investors are once again facing the possibility of a bear market.

Who knows? Nevertheless, in order to survive and thrive as an investor, it pays to remain alert and to find what’s working in any market. And in this market, dividend stocks, inverse exchange traded funds (ETFs) whose share price rises when the market falls, are doing very well. Furthermore, REITs are starting to show signs of life.

Indeed, one of the best performers in the Joe Duarte in the Money Options portfolio right now is the ProShares Ultrashort QQQ ETF (QID), which is up 11.2% since I recommended it on May 3. QID is a leveraged ETF whose share price rises or falls at 2X the rate of the QQQ ETF, which invests in the Nasdaq 100 index (see chart). 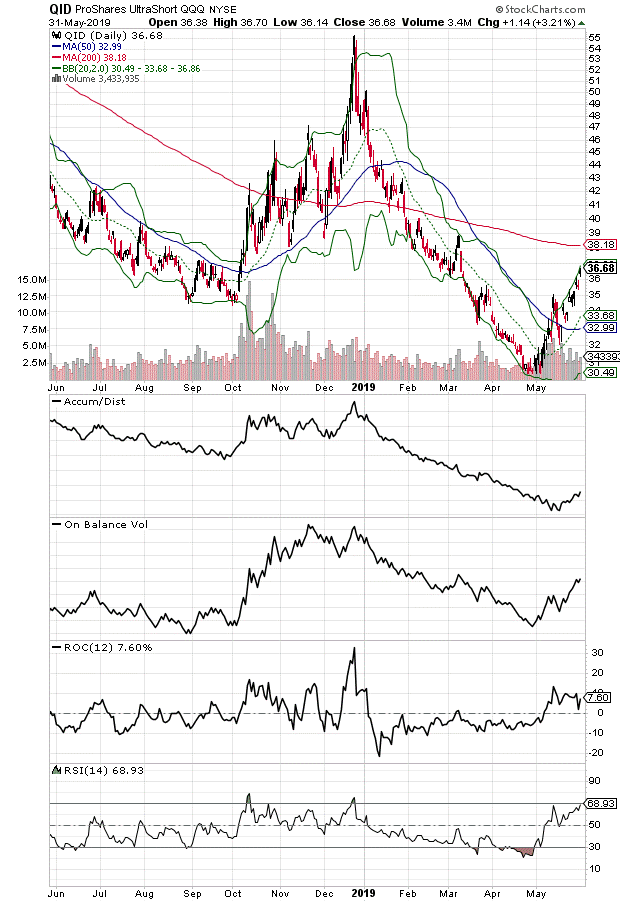 But QID is not alone in doing well in this market, as dividend stocks such as Coca-Cola (KO), which is one of the Joe Duarte in the Money dividend stock portfolio holdings, are also holding up. Investors who wish to capitalize on Coke’s dividend had until June 1, the ex-dividend date to buy some shares. Coke shares have been rising of late after delivering a better than expected quarter and giving investors upbeat guidance. The 3.26% dividend yield isn’t exactly chump change either when bond yields seem to be heading to 2% if their trend doesn’t reverse. 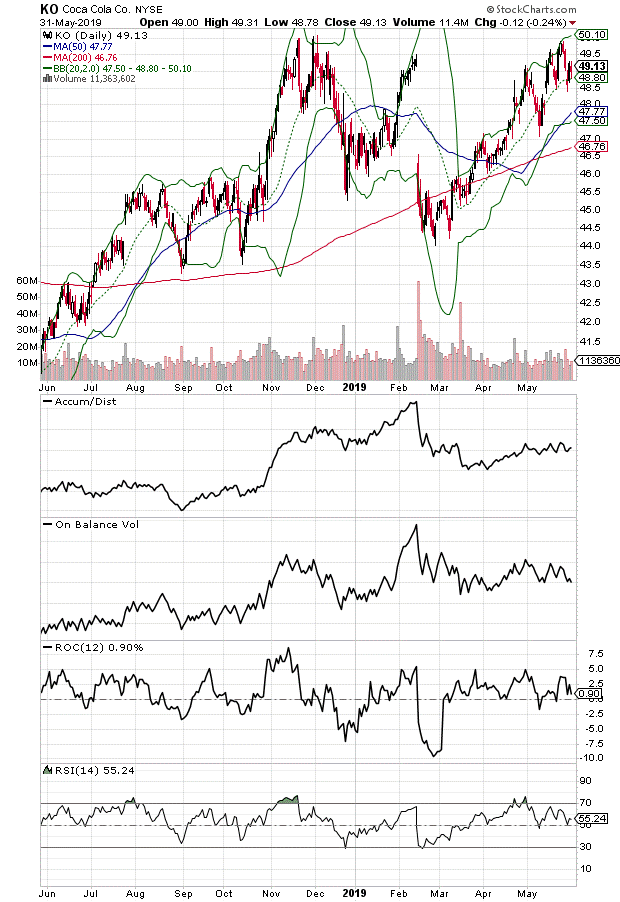 Truly the most interesting aspect of the sudden reversal in stocks is the collapse of U.S. Treasury bond yields, with the U.S. Ten Year note (TNX) yield closing the week below 2.2% to end the week of May 31. Moreover, this fall in bond yields has led to 15-year mortgage rates in the 3.3% area. So far, as I will show below, lower mortgage rates have not helped the housing market. This is a worrisome sign since traditionally, homebuilder stocks do well when mortgage rates fall. 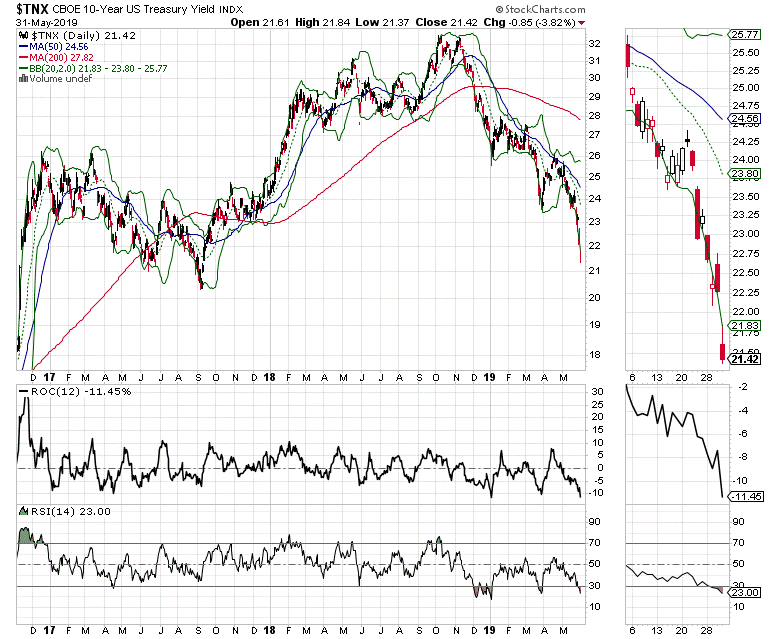 In fact, the chart for the S&P Homebuilders Index (SPHB) suggests that money is starting to move out of the housing stocks as investors are increasingly glum and concerned about the economy and the potential for a repeat of the subprime mortgage crisis of 2008, which devastated the homebuilders and mortgage lenders. 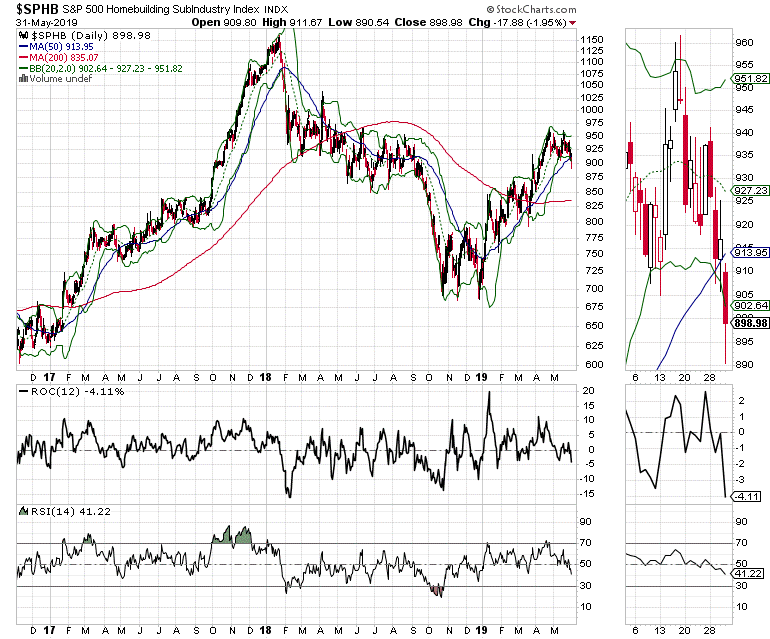 However, even as homebuilder stocks retreat, real estate investment trusts (REITS) have held their own as yield hungry investors flock to these dividend paying instruments in order to maximize returns. A major reason for the relative strength in this sector is that more persons are willing to rent than to own a home in the current climate. But apartment REITS are not the only ones doing well. Some commercial REITs, those who own land housing businesses with deep pockets and strong balance sheets are doing well (see chart). 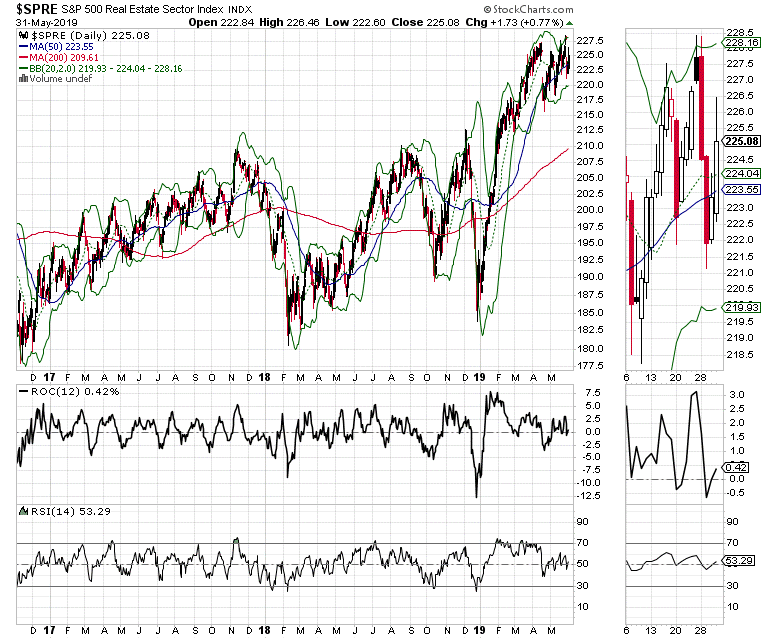 My point is that, we never know whether we are in a bear market or not until it’s well established. And although things look pretty bad at the moment, all we can do is trade what we see. Consequently, as I’ve been saying over the last few weeks, there are still areas of the stock market which are offering investors money making opportunities. Furthermore, these areas share one thing in common, strong fundamentals; especially the ability to generate cash flow in an economic slowdown.

There is always a bull market, and I just recommended two dividend paying stocks in an overlooked sector of the market that is heating up. These stocks have the potential to move significantly higher as bond market interest rates fall.

The good news is that the New York Stock Exchange Advance Decline line (NYAD) closed below its lower Bollinger Band to close the month of May. Normally, this would be a sign that a trend reversal is near. And although that is not out of the question, the bad news is that beyond the breaking of the lower Bollinger Band support area, the most accurate indicator of the stock market’s trend since the 2016 presidential election looks otherwise dismal. 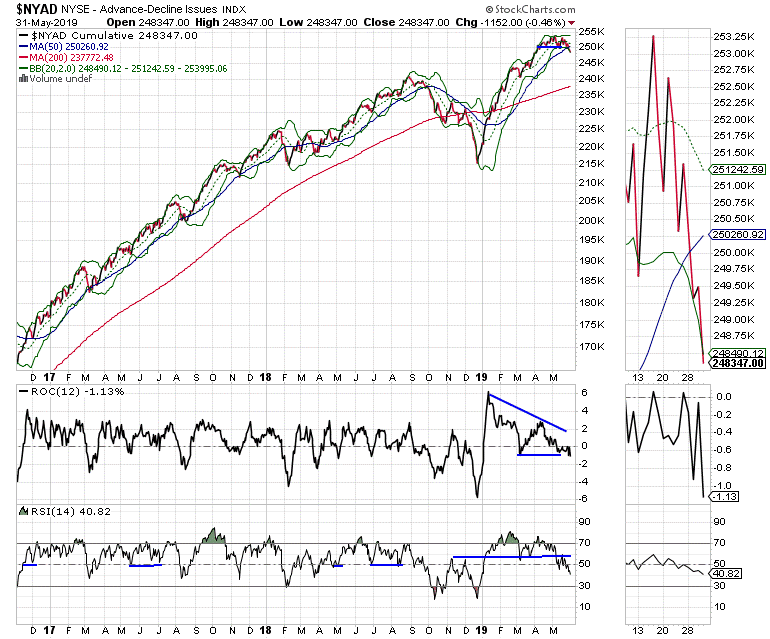 Accordingly, both the S&P 500 (SPX) and the Nasdaq 100 (NDX) indexes don’t look much better. Both indexes are now in intermediate-term down trends and are testing the key support of their 200-day moving averages. 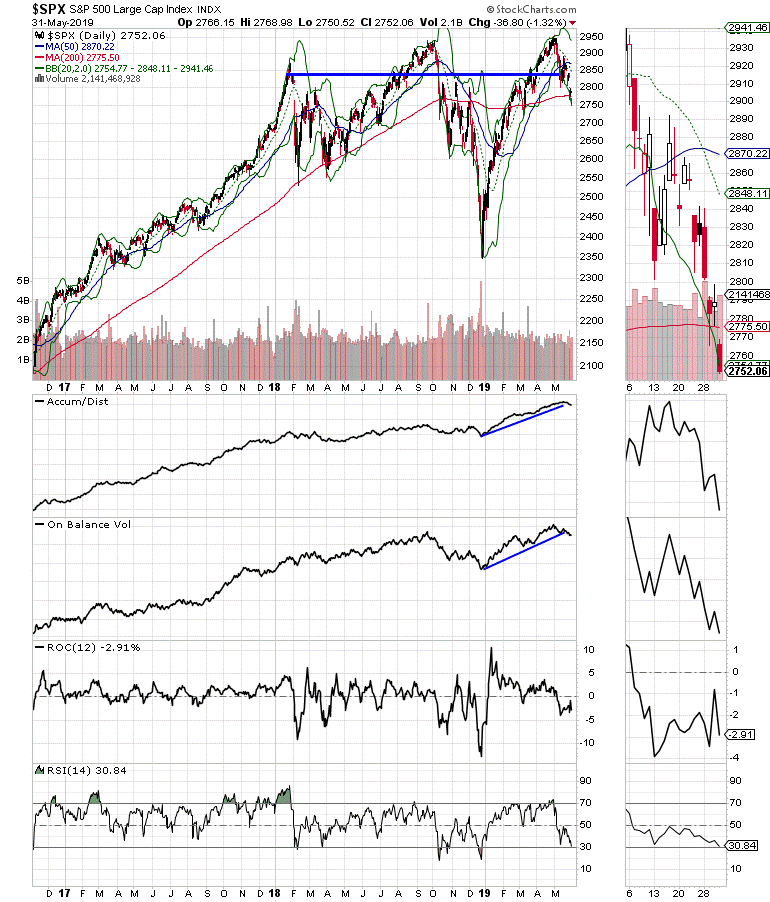 If there is a bright spot, it’s in the relative strength index (RSI) indicator which is closing in on the oversold area of 30. But that’s not a guarantee of anything more than a short term bounce at the moment. But accumulation distribution (ADI) and on balance volume (OBV) have both broken below their recent uptrend lines, which means that money is finding it easier to leave stocks than to find a home there.

Let the market make your decision

My favorite market guru of all time, the late Marty Zweig always said, don’t fight the Fed and don’t fight the market’s momentum. Consequently, even though the Fed is neutral, it’s hard to ignore that there are more sellers than buyers in the market at the moment.

Thus, over the last few weeks, I’ve been letting the market make my decisions by letting my sell stops trigger my selling decisions. So far, it’s been a useful tool, which I will continue to employ along with hedging my long positions via inverse ETFs while using options for more speculative trades.

Thus, investing in dividend stocks, considering REITs, and using inverse ETFs makes good sense at the moment. Finally, all we can do is to wait for the next salvo in the increasingly dangerous world of politics and tariffs from our well-fortified portfolio bunker.

I own QID and KO as of this writing.

Joe Duarte has been an active trader and widely recognized stock market analyst since 1987. He is author of Trading Options for Dummies and The Everything Guide to Investing in your 20s and 30s and six other trading books.

To receive Joe’s exclusive stock, option, and ETF recommendations, in your mailbox every week visit here.