Euro Reversal Is Queued Up: Will Market Comply?

The yearlong bear channel in the euro is close to reversing, but the market needs to close above a key technical level, writes Al Brooks.

The EURUSD daily Forex chart had a consecutive outside bar buy signal last week. It will probably lead to a test of the March 20 high of 1.1448.

The weekly chart on the EURUSD currency pair rallied last week after a micro double bottom. However, the bulls need two closes above the 20-week exponential moving average (EMA) before traders will conclude that there is a reversal underway. There have been many reversal attempts over the past year and each one failed. The yearlong bear channel soon saw a new low (see chart). 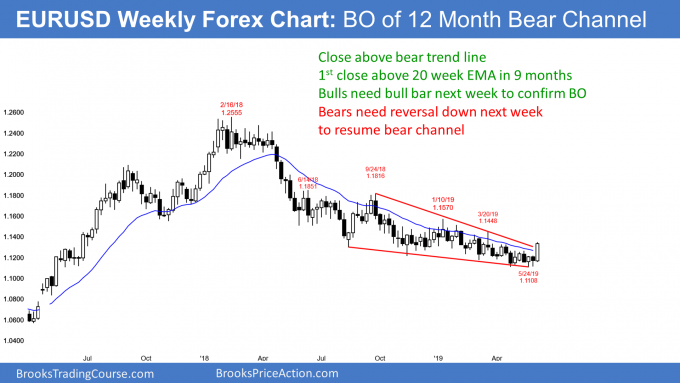 Look at what has happened at the 20-week EMA over the past year. Every break above the average failed. In fact, Sept. 20 is the only close above the 20-week EMA in over a year. The following week was a bear outside down week that closed below the 20-week EMA and near its low. The bulls need a bull bar next week to change the pattern and make traders believe the bull breakout will succeed.

Bear channel is a bull flag

Every week we point out that the weekly chart is in a bear channel. That will not last forever. Channels end in either of two ways: A strong break below the bear channel followed by an even stronger bear trend (25% likelihood); or a successful break above the channel. There is often a brief strong break below that reverses up before the bull breakout (75% likelihood).

Once there is a bull breakout, the bulls will try to continue the rally up to where the bear channel began. That is the June 2018 high above 1.18. It took a year to get down to 1.11. Traders should expect any rally up to 1.18 to take many months and possibly a year.

There is now credible evidence that the channel is ending. However, the bulls need follow-through buying over the next few weeks. In particular, if they have a second strong bull trend bar on the weekly chart this week, the odds will be that the bear trend has ended.

It is important to remember that there have been many bull breakouts over the past year. Read my post during any of the breakout attempts. You will see that during every strong bull or bear breakout, a reversal was more likely than a successful breakout. However, if the bulls get two closes above the March 20 high, the odds will shift in favor of a successful bull breakout.

Last Wednesday was an outside down bar on the daily chart. However, Thursday was an outside up bar. Consecutive outside bars where the second bar is a bull bar is a reliable buy setup. Friday’s breakout above Thursday’s high will probably lead to a test of the March 20 major lower high. The bulls will be more inclined to buy pullbacks and breakouts over the next few days, expecting higher prices for another week or more.