With Summer officially over we are sharing a strong bull call on gold from Jeff Greenblatt who also include the timely warning that interest rate cuts may not matter, reports Jeff Greenblatt.

Summer months can bring on the slower trading season. But June is always interesting, especially the second half. Over the next week we’ll have a Federal Open Markets Committee (FOMC) meeting and the seasonal change point. For those who don’t know, financial markets tend to change direction with the change of season. June is more interesting as it also has a golden spiral date, June 18. It’s not as important to financial markets as the March seasonal point because that is the one Gann pointed to as the place where the annual cycle starts all over again. But the June turn, with its 6/18 aspect has the potential for turning points from next Tuesday to the following Monday since June 21 is a Friday. As it turns out the next Fed meeting is right in the midst of it.

Suddenly the crowd appears fixated on an interest rate cut, with markets near all-time highs? What is the latest GDP reading? Wasn’t it around 3.2%? Isn’t the economy doing better now than at any time this decade? In the past couple of updates, I shared the larger more structural problems with the market. These are black clouds that will hang over the market through the election next year. The bottom line is the Fed isn’t supposed to lower rates on the back end of a prosperous business cycle.

But I remember a time when they did. I remember the first trading day of 2001 when then Fed Chair Alan Greenspan lowered rates and it came unannounced. He lowered rates between meetings. Realize this was after the bubble burst but before 9/11. It was only after 9/11 where people really felt the pain when the economy came to a grinding halt. But by January 2001, the Dow had already been in a bear market for a year and the NASDAQ for 10 months. People were still hoping for a soft landing and didn’t realize something bigger was going on. It was already after the end of the top of the business cycle. If there is a similarity now, we are in a post 2018 selloff world where some charts did not make new highs in 2019. One of those charts happens to be the Dow. Suddenly markets rallied on a weak jobs number with the hope of a rate cut. It was first supposed to happen in September, but more recently expectations have it coming in July. Why not next week? Are they setting us up for a fall?

Here’s what I remember. The crowd was also looking for a rate cut in the pre-9/11 era after the bubble burst. Greenspan gave it to them. Bears were squeezed as tech jumped sky high that day. It stayed up a little while, but ended up being totally retraced. The period between February and May 2001 was one of the weakest ever in the history of the NASDAQ. I remember it well as it dropped around 2000 points in eight weeks. I was too late for the bubble heading into 2000. But I was right there for the bear. What does that mean to us right now?

When there are structural issues, all the rate cuts in the world won’t save the day. Back then tech was still dealing with companies trading in the hundreds yet had no hope of ever turning a profit. Today we have different problems and rate cuts won’t be the solution. They could buy the rate cut theory or news all they want. I think it will eventually be retraced.

That’s why we are looking at gold for the first time in a long time. Precious metals have a history this decade of rallying and teasing. Every time gold has looked like it could break through, it didn’t. This time could finally be different. Looking at the 180-minute chart, the breakout came a couple of weeks ago on a great square out (see chart below). 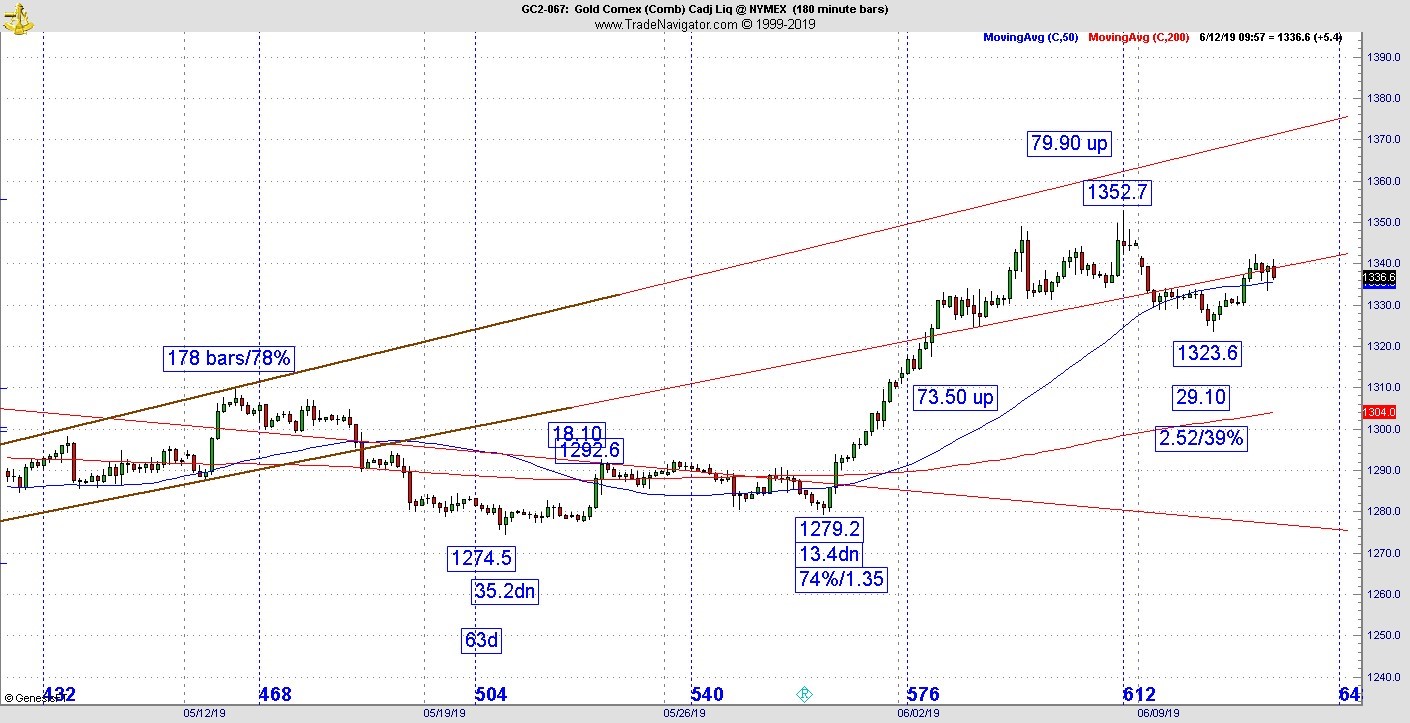 Your numbers may now be different because the continuation chart has rolled over. But this was the situation when it happened. The inverse retracement ratio of 1.35 lined up with the 13.4-point drop. That’s how vibrations work. Now it stalled again but trying to hold the line on yet another interesting vibration. The inverse ratio here of 2.52 lines up with the 1352 high and it’s starting to react. News and geopolitical events we’ve discussed here might finally allow the wind to be at the back of the precious metals market. I can’t say that for sure but what I can tell you is the technical condition has started to improve.

The stock market is in a stall right here. If it continues to stall, it could be setting up to go higher on the other side of the seasonal change point. The higher probability would still be the market snapping out of this little funk with the chance it could peak by the end of next week.

Mining for Value with Safe Money Report
11 hours ago

While we are still in the midst of a global pandemic and US-China relations remain tense, with growi...