The EURUSD weekly chart has transitioned into a trading range after a yearlong bear channel, writes Al Brooks.

There is a 40% chance of a rally in the Euro FX currency pair (EURUSD) testing its January high. The weekly chart in the EURUSD formed a small bull bar last week after the previous week’s selloff. Last week was a higher low in what the bulls hope is a new bull trend. It is therefore a buy signal bar for this week (see chart). 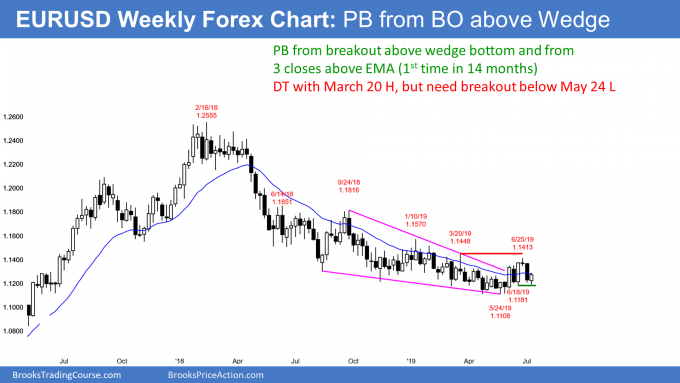 The weekly chart was in a bear channel for a year. It has been in a trading range for five months. Every trading range is also in a bull trend or a bear trend. And the EURUSD is still in a broader bear channel, despite last month’s breakout above the tight bear channel. The bulls are hoping that this week will be a higher low in a bull channel.

Until there is a clear breakout of the range, traders will continue to bet on reversals. They will buy dips, sell rallies, and take profits after a bar or two.

The weekly chart had been in a weak bear trend. That meant that lower prices were likely. Now, the bulls have at least a 50% chance of a move above the June high. Furthermore, they have a 40% chance of a test of the January high.

Euro Bears Fight Back
10 hours ago