The Japanese yen is back on top and stock indices are falling on fresh Trump comments threatening to cancel the September meeting with China. That is one of several developments creating market uncertainty:

Stock indices peaked at 6 pm Eastern on Thursday on White House holding of threat to escalate trade war (see the chart below). 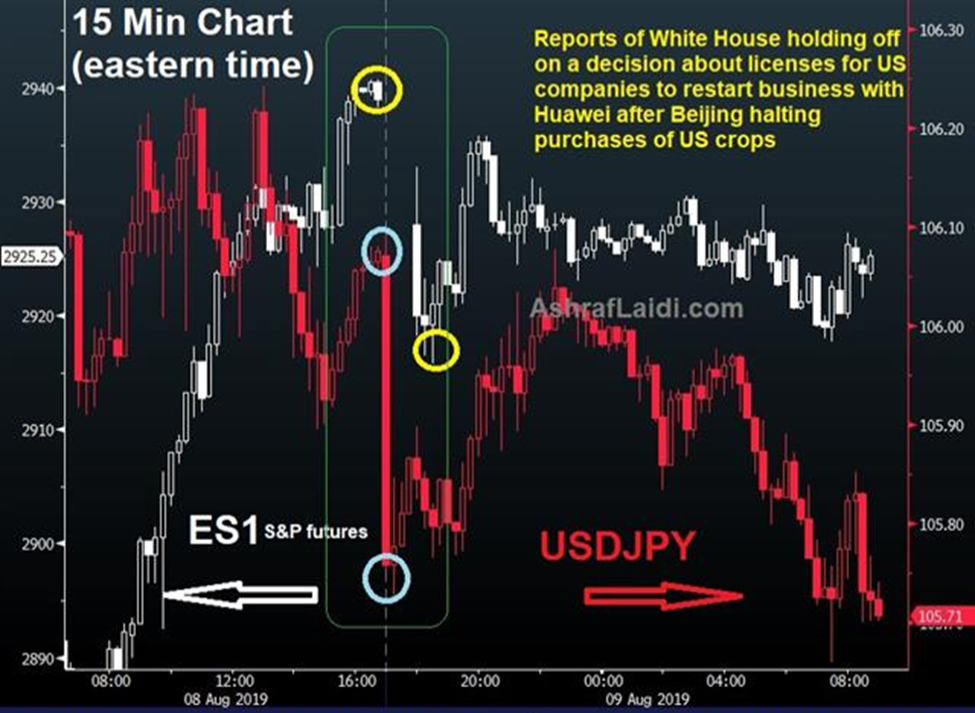 The euro is partly stabilizing on soaring EURGBP and on reports that that suggested German Prime Minister Angela Merkel's cabinet may be open to fresh spending. The International Monetary Fund, European Central Bank and others have been badgering the government to spend and the market is offering debt at sub-zero levels so there's a compelling case, especially with growth showing increasing signs of a slump. The report said new debt would strictly go towards climate change measures but that's a potentially-broad category and could help to open the floodgates.

Elsewhere in Eurozone politics, the euro briefly stumbled with an Italian election now appearing inevitable. The Italian League Party is in a dominant position in the polls and with a small further bump could form a far-right coalition. Risks are lower than they were in prior elections with an exit from the Eurozone now clearly off the table, but we will have to wait and see where the talking points in the election lead. Watch the euro/Swiss franc cross (EURCHF) for a better appreciation of these risks.

Aside from the obvious warning signs the UK GDP contraction calls for supporters of a no-deal Brexit, note that the UK imports plunged 13% after having jumped in Q1 as British firms hoarded foreign-made components. The 1.6% year-over-year decline in business investment was countered by 0.7% rise in government spending focused on healthcare. The usually well-functioning services sector showed no growth for the fourth straight month, while construction, industrial output and manufacturing all contracted.

Back to the Bank of Canada. It's been weeks since Bank of Canada Governor Poloz and company weighed in and there is nothing on the schedule until the Sept. 4 BOC decision. A cut would be premature and certainly isn't justified by recent economic data but given the global backdrop, it's not out of the question. However, if it's coming, there will need to be some kind of BOC signal – probably via a press interview – in the next week or two.