The U.S. dollar was boosted by recovering risk trades on Thursday on an ebb in trade tensions, reports Adam Button.

The U.S. dollar was boosted by recovering risk trades on Thursday on an ebb in trade tensions. The Canadian dollar was the top performer while the Swiss franc lagged. Week-to-date, silver and CAD are the only gainers versus the U.S. dollar. The week wraps up today with Canadian GDP and the US PCE report. US traders in need of a rest, looking forward to a Labor Day weekend, which coincides with the rollout on Sept. 1 of additional tariffs on U.S. imports from China.

The chart below highlights August's volatility, showing the S&P 500 had three days of 2.5% declines or more — the highest since December 2018--while also containing seven days of 1.0% gains or more— the highest since the fateful February 2018. Such two-way volatility bears reason for concern. 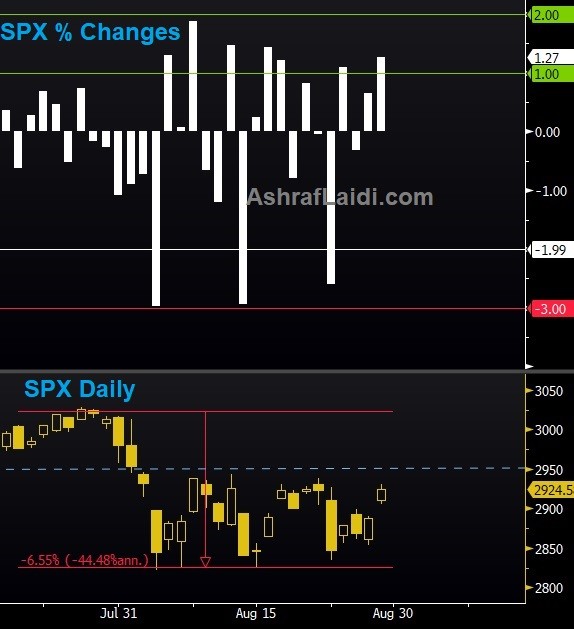 The equity market continues to bite on headlines that suggest continuing U.S.-China trade negotiations. On Thursday that resulted in a 36-point jump in the S&P 500 as all the main global markets made strong gains.

Meanwhile, the bond market remains unimpressed. Treasury yields moved up briefly on a two-basis point tail at a seven-year auction, but the move didn't last as yields finished the day up a couple of basis points across the curve.

In FX, risk trades were also tepid. The Australian and New Zealand dollars failed to make any headway against the field. It all suggests that flows and month-end rebalancing are bigger factors than any genuine change in sentiment.

A long weekend in North America now looms with drama in UK parliament likely to greet the return on Tuesday. The British pound has held up admirably in the turmoil this week and positions remain deeply short. Some headlines suggest that Jeremy Corbyn could have support from at least one Conservative in a caretaker government and Speaker Berkow is reportedly scheming with Conservative remainers. The pound could jump on legislation ruling out a no-deal Brexit.

Economic data springs to the forefront today. The July U.S. PCE report is another critical look at the U.S. consumer. It's expected to show personal spending up 0.3% with inflation running up 0.2% for July. Any disappointment would harden calls for Fed cuts.

The Bank of Canada is a tougher central bank to handicap, in large part because there has been zero communication from the BOC since July 10. The market is pricing in a 15% chance of a cut on Sept. 4, but that could shift depending on Q2 GDP data due Friday. The consensus is for a healthy 3.0% annualized pace.