Market Poised for Big Move as Wall of Worry Rises

Equities are on edge and bonds may be directing traffic as we enter the weakest and most volatile seasonal period for stocks, writes Joe Duarte.

We are experiencing a hair trigger stock market which is poised to make what could be a significant move as the wall of worry erected by interaction between the Federal Reserve and the White House, the U.S.-China trade war, and the increasingly tense geopolitical situation (Hong Kong and Brexit) converge. What this means is investors should expect the unexpected as the month of September—a historical weak and volatility one for equities — arrives.

As I noted last week, the U.S. stock market was on the razor’s edge at the start of the pre-Labor Day week. Moreover, by the time the week ended, despite the lack of a complete market breakdown, there was still no definite verdict on the direction of the next major move other than the odds of one coming soon are on the rise.

So, as we head into the often treacherous months of September and October, it’s important to keep in mind what has worked and what may work in the future and that trading what we see is more important than to make blind bets on what we expect.

With the market on pins and needles only one thing is certain, it’s presently not as easy to find winners as it was at the end of the Q4 rout in stocks. But, it’s not impossible either, if you keep an open mind and look for the correct situation and setup. For example, last week I wrote about Generac Holdings (GNRC), a power generator manufacturer whose shares rallied nicely on the hurricane situation in Florida and the U.S. East coast. And although the stock broke out on the news of the worsening hurricane, depending on how the situation develops, it could well add to its recent gains.

Yet, beyond seasonal stock picks the recent volatility has created some opportunities in stocks of companies, which happen to be in the right place at the right time, such as software designer and administrator Leidos Holdings (LDOS), which I recommended in April 2019, about 36% below the closing price on Aug. 30 (see chart). 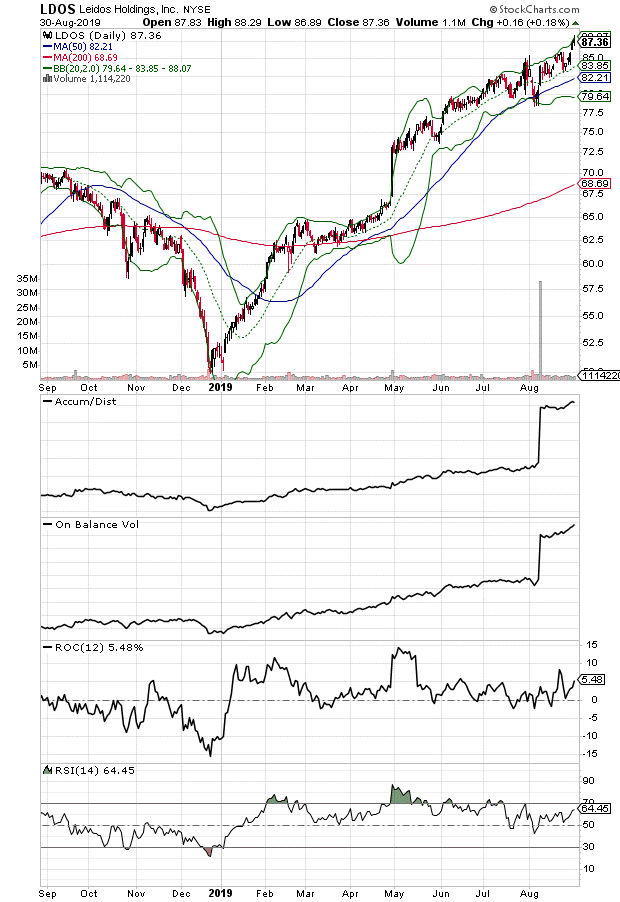 Leidos is poised to do well over the longer term because of its customer base; local, state, and the Federal governments, especially the U.S. department of defense. And it’s the latter where I expect there will be more growth in the not too distant future due to the U.S.-China trade war and the rising need for intelligence gathering and data sorting as the geopolitical situation remains a hot mess.

In other words, as long as there are taxpayers to foot the bill and geopolitics to create a need for spyware and systems administration, LDOS will have business. Moreover, they’ve been getting paid well for their wares as they beat expectations and raised their guidance while announcing a growing book of pending deals in their most recent earnings report. One example of such a deal, which has recently closed is a $160 million pact with the U.S. Army for software engineering at Mission Command, and management of fires and radar systems. At the same time the company just completed the acquisition of IMX Medical Management Services, which will bring the revenue of data management for three thousand medical exams and medical reviews per day from key federal customers.

The stock broke out this week and has the potential to move to the $90 area as investors start to factor in what is expected to be another positive earnings report in late October. LDOS will also pay a dividend of 34¢ on Sept. 30.

Markets Remain Up in the Air

Two weeks ago, the New York Stock Exchange Advance Decline line (NYAD), the most accurate indicator of the stock market’s trend since the 2016 election, closed at its 50-day moving average before rebounding throughout the week ending on Aug. 30. But even though the indicator improved its standing it once again left investors with a sense of dread as it failed to make a convincing new high to end the week. 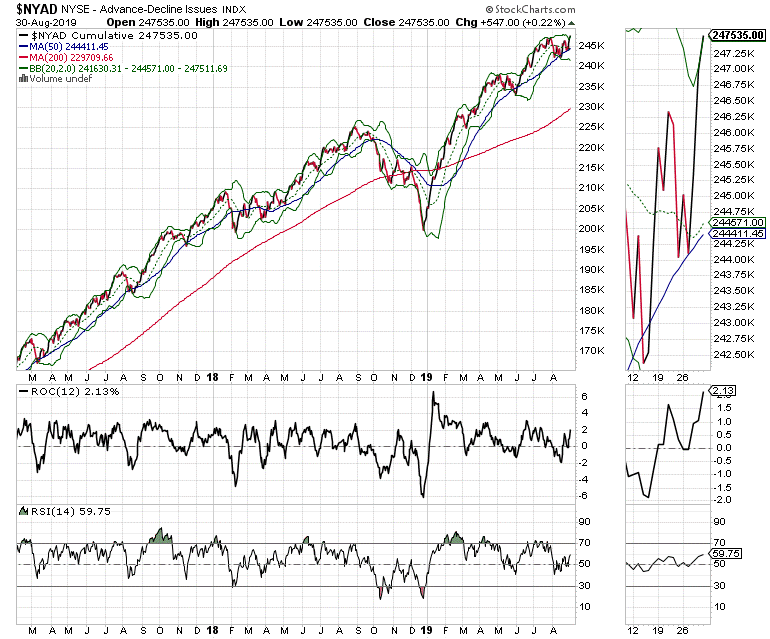 Meanwhile both the S&P 500 (SPX) and the Nasdaq 100 (NDX) indexes, while also bouncing off of long term support, failed to close the week above their 50-day moving averages, essentially leaving the overall market’s trend up in the air. 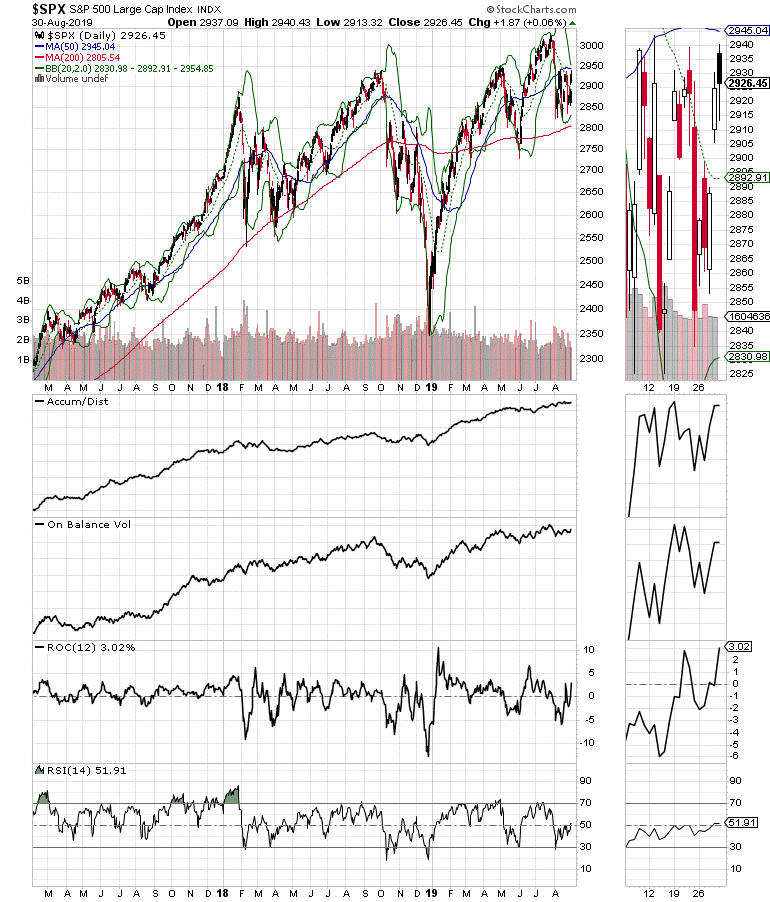 Nevertheless, a big move is coming as the Bollinger Bands are increasingly tight, suggesting that the market is storing energy, which will be released at some point in the not too distant future as some time of significant price move develops. Thus, given recent history, whichever way the market breaks, up or down, it’s likely to be a sizeable move. 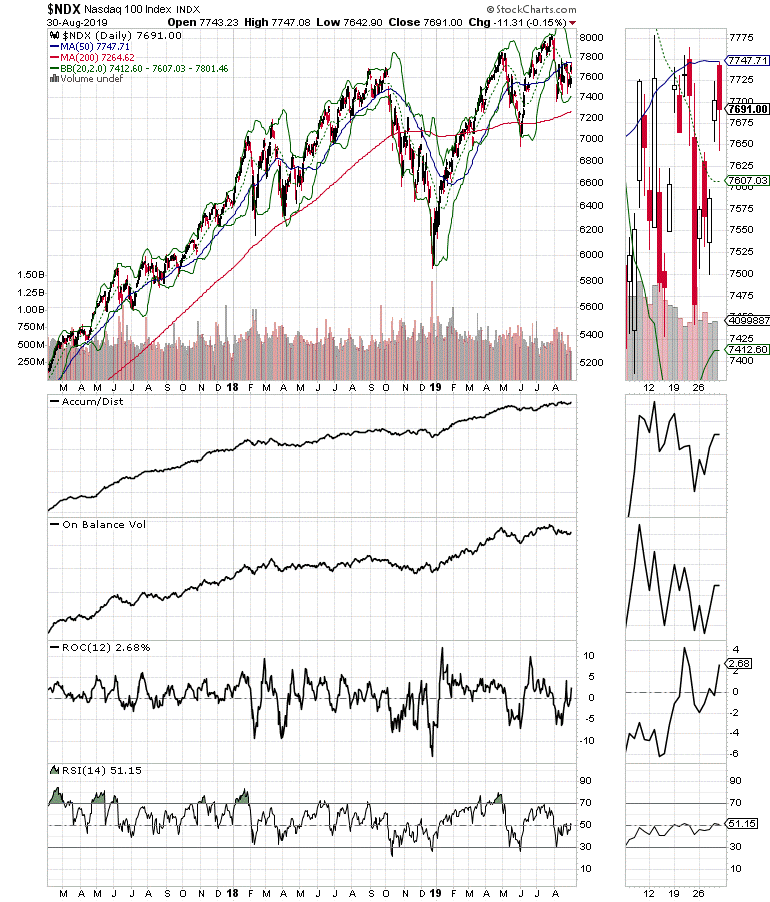 Moreover, the Relative Strength Index (RSI) and rate-of-change (ROC) indicators for NYAD, along with the Accumulation Distribution (ADI) and On Balance Volume (OBV) for the indices are stuck in neutral, only confirming that the market is undecided but that a big move is coming.

Bonds May Hold the Key

While the stock market is on pins and needles, the bond market rules the roost. That’s why I’ve been covering it here in more detail for the past few weeks. In fact, it’s the interplay between the bond market and the Federal Reserve is most important for stock prices since these two players are the biggest influencers of the Market-Economy-Life loop where the instant dissemination of news via social media and the 24 hour news cycle prods people into making crucial financial decisions based on their expectations for the trend of interest rates. 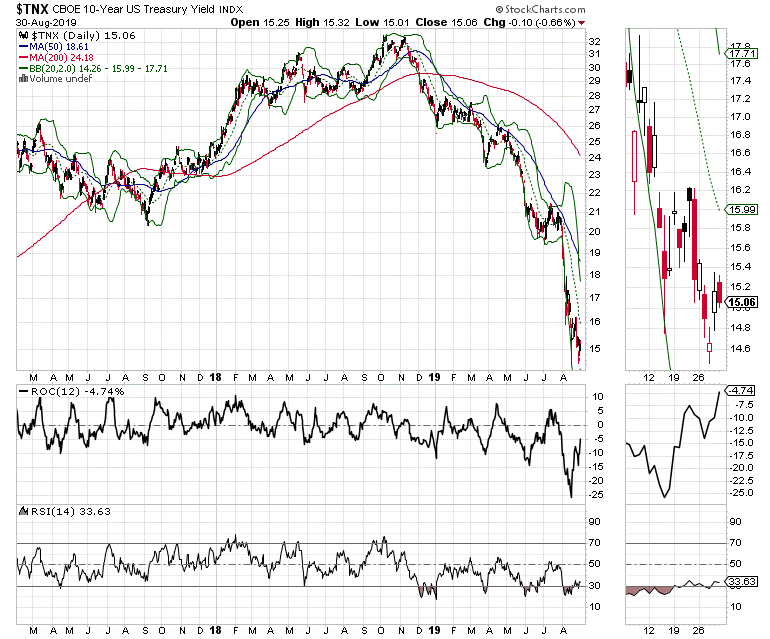 Last week, despite relatively weak housing news, mortgage rates actually rose as the U.S. Ten Year note yield (TNX) rebounded above the 1.5% area, which seems to be the floor for rates at the moment. Meanwhile consumer confidence is starting to roll over, and those houses I’ve been watching for the last few weeks are still for sale with Open House notices and reduced price signs on them.

When you put it all together it’s hard not to notice how fast the news travels, how quickly people react, and that the Fed is living in the 1990s.

Getting Ready for the Unexpected

With technical and fundamental indicators pointing to investor uncertainty, and a cautious consumer just before the three-day holiday, it’s a good idea to take a step back and see what happens before putting big money to work. At the same time, planning for any eventuality and being ready for anything is paramount.

Thus, as we head into what is traditionally a volatile two months in the market, shoring up sell stops on open positions while simultaneously looking for opportunities on the long side, and considering the use of hedges such as inverse ETFs and options is the way to go. Meanwhile keeping tabs on key chart points for when the market breaks above key resistance or below crucial support. Specifically, the key resistance and support levels are at SPX 2945 and 2893 respectively. The former is the truth line for the bulls, while the latter is the red line for the bears.

I own GNRC and LDOS as of this writing.