With impeachment talk and an economy that is appearing to soften, Joe Duarte says it is time for investors to exercise cautions.

The bulls ran for the exits last week as a political nuclear blast hit Washington DC and the sellers took over the market in aggressive fashion with no sign that the bulls will be in charge again for a while unless something very positive, such as a full and complete trade deal between the United States and China develops in the next few days. And to make matters worse, computer memory giant Micron Technology (MU), gave investors a very dim and hazy future guidance based on its current trade war expectations, taking the wind out of the sails of what was starting to become a very promising semiconductor sector rally.

As I stated last week, the only way to survive in this market is to follow the money. And unless something changes, money is now moving out of the markets. Thus, as the action turned sour active traders should have pivoted into managing hedged instead of net long portfolios and should assume an overall cautious tone until it is clear that things have calmed down. That said, this bull market’s story may not be fully written. After all, even as Washington melts down, the most recent U.S. data, especially housing related data remains fairly decent, especially when compared to the rest of the world.

Furthermore, if the economy weakens further, the odds of more interest rate cuts from the Federal Reserve will rise. Of course, just because the Fed cuts rates, there are no guarantees of higher stock prices. Nevertheless, those who trade one stock at a time, hedge their portfolios appropriately, and follow the money to what’s working are likely to remain in the game over the long haul.

When a stock misses on its revenues and ends the day higher, it’s a sign of strength. But when the market rolls over on the next day and the stock continues to act well, it becomes clear that the company and its sector maybe onto something.

Well, as difficult as it is to find such as scenario on Wall Street these days, that’s exactly what happened when KB Home (KBH) beat expectations on its earnings on Sept. 26 but missed on its revenues. Initially the stock fell, but on the heels of better than expected numbers for sector wide pending home sales along with comforting guidance about the future from KBH’s CEO on the company’s conference call the stock continued on its steady climb on Sept. 27, despite a very dicey overall market. 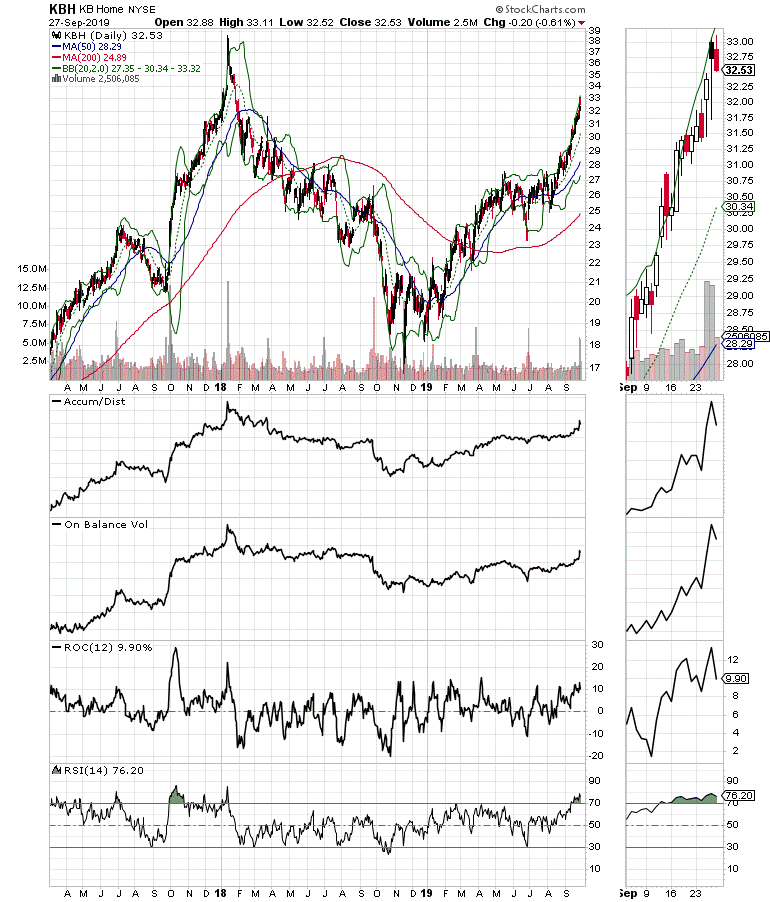 More specifically, the market seemed to like the company’s increasing the number of its communities as well as a move toward higher margin properties. Meanwhile, KBH continues to reduce its debt load while capitalizing on the demographics of the moment and the continued tight housing supply in the marketplace, especially in the grossly underserved first time buyer segment. Indeed, KBH delivered 55% of its new homes in the third quarter to first time buyers, while also focusing on move up buyers and empty nesters. The three categories compose the largest composite segment of the market.

So, while KBH is firing on all cylinders, it’s important to also focus on whether the company is immune from macro trends, such as the general political trends of the moment and the potential for an economic slowdown if the political situation worsens and people hunker down. If this cycle is as previous cycles, housing stocks should start to tumble as soon as the market starts getting concerned about the economy.

But so far that has not happened, so the question is whether it will start soon or whether this time is different, and people will shrug off the politics and general queasiness of the moment. In other words, as is often the case, housing stocks will be a canary in the coal mine for what happens to the overall economy.

Thus, investors should be following the developments in the Markets-Economy-Life complex adaptive system for clues very closely. The bottom line is that if homebuilder stocks continue to rise along with the housing data, it would be a sign that everyday people are voting with their wallets and that the politics of the moment are secondary to them.

This will be very interesting to watch for sure.

The New York Stock Exchange Advance Decline line (NYAD) made a new high on Sept. 26 but rolled over aggressively the next day along with the market suggesting that the short term trend has likely reversed, unless NYAD finds support once again at its 50-day moving average which has been a great trend barometer since 2016. 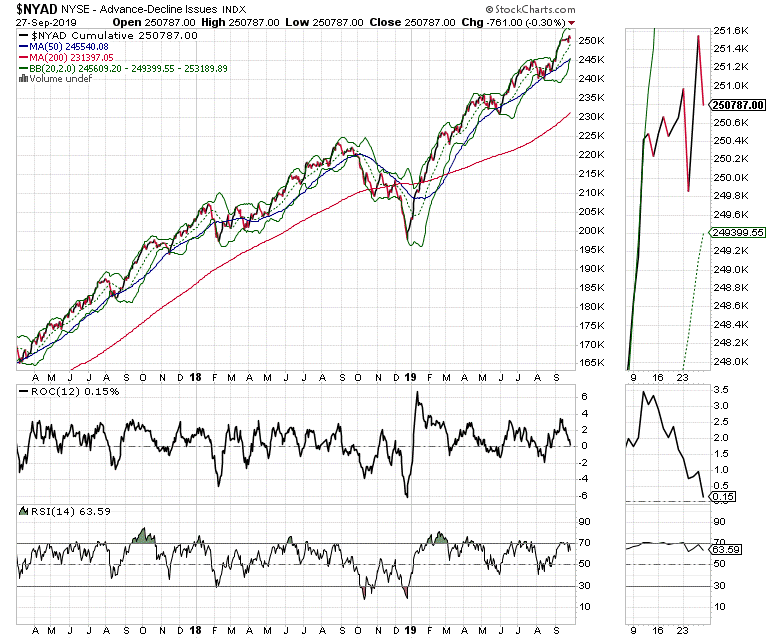 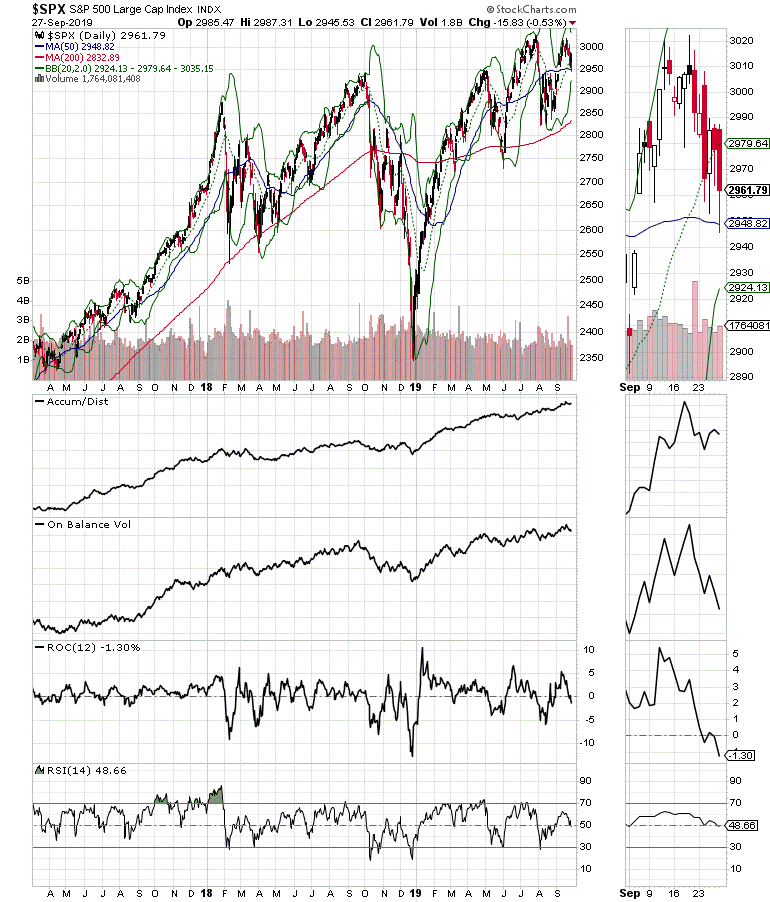 The S&P 500 (SPX) also fell but was able to hold above its 50-day line as energy and housing stocks held up better than the high tech sector. Unfortunately, the On Balance Volume (OBV) indicator for the indexes shows heavy selling pressure while the RSI for NDX, SPX, and NYAD still has a long way to go before hitting oversold. 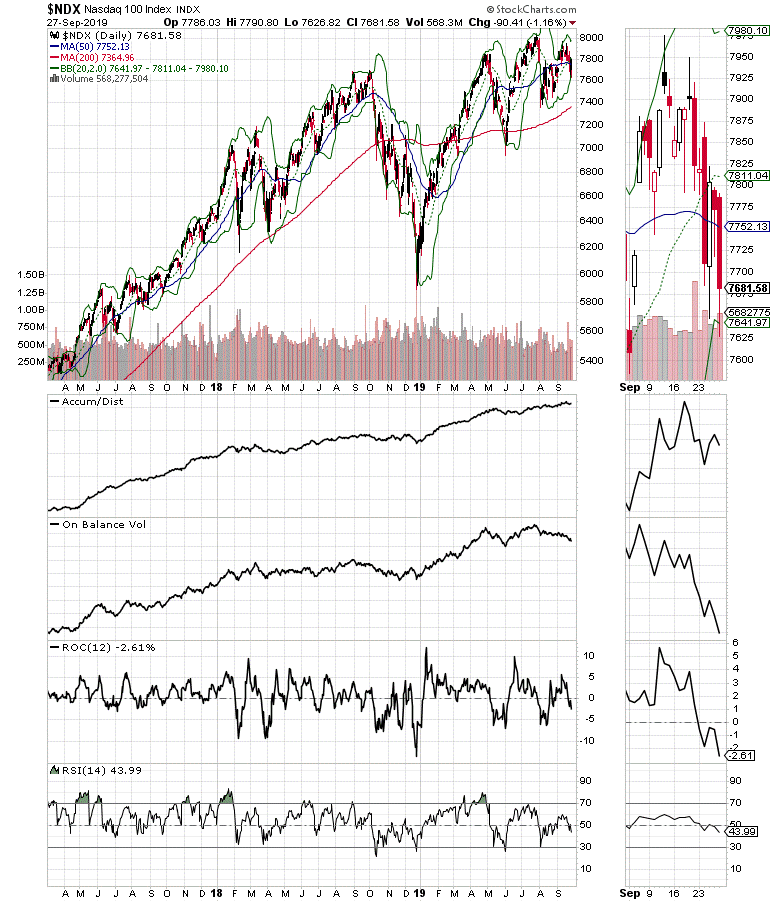 Meanwhile, the bond market is poised for a big move with the Bollinger Bands around prices starting to shrink as the U.S. Ten Year Note yield (TNX) bounces between its 20- and 50-day moving averages.

This is no Time to be a Hero

When high stakes political games take over the headlines there is no point in taking risks. As a result, this is one of those periods in the market where having raised some cash, being hedged, and tightening sell stops is the best place to be. Moreover, the speed with which events have developed suggests that the headline reading algorithms are about to be very confused and that volatility could be legendary.

Furthermore, with the public being plugged into the news cycle and with the Markets-Economy-Life complex suddenly finding itself at a crucial pivot point, this is no time to be a hero in the markets. Take cover.

Vaccine Optimism Boosts Stock, Jobs Data Up Next
4 hours ago

Stock index bears could not maintain momentum, signaling a move to the upside, reports Ricky Wen....

Dollar Weakening Again; Is Hyperinflation on the Way?
4 hours ago

The VIX should not be feared but considered in all options strategies to achieve higher returns safe...