What the Fed and the bond market do is almost more important than any trade deal, writes Joe Duarte.

The jury may be out on the U.S.-China “Phase 1” trade deal announced by President Trump late Friday afternoon, Oct. 11 but if the bond market, the Federal Reserve, and the general seasonality of the market line up just right we could see a fairly good end of the year rally.

Nevertheless, the ride higher for stocks, if it indeed materializes will not likely be a low risk affair, especially if the trade deal is nothing more than smoke and mirrors and the impeachment situation in Washington somehow manages to deteriorate further. Even more daunting is what the Fed says and does over the next month or two and how the bond market and consumers respond to the general state of complex adaptive system - the markets, the economy, and life.

Still, don’t count the bulls out as the traditionally bullish end of the year trading period approaches, stock investors may get one final rally before the lights go out for 2019.

I am cautiously bullish on the homebuilders based on company earnings and guidance and confirmed by bullish Accumulation/Distribution (ADI) and On Balance Volume (OBV) as well as on the continuation of positive employment data and friendly interest rates. But, as the political situation has worsened and the pressures of the trade war have started to squeeze some businesses, it’s often difficult to separate the news from what’s actually happening.

Note the recent surge in mortgage applications (both for refinancing and new homes) as the U.S. Ten year note yield (TNX) fell over the last several months. Consider the bullish earnings reports and positive guidance expectations of homebuilders in the context of the recent rebound in the University of Michigan consumer confidence survey – buoyed by higher wage expectations - and the general trend of the stock market. 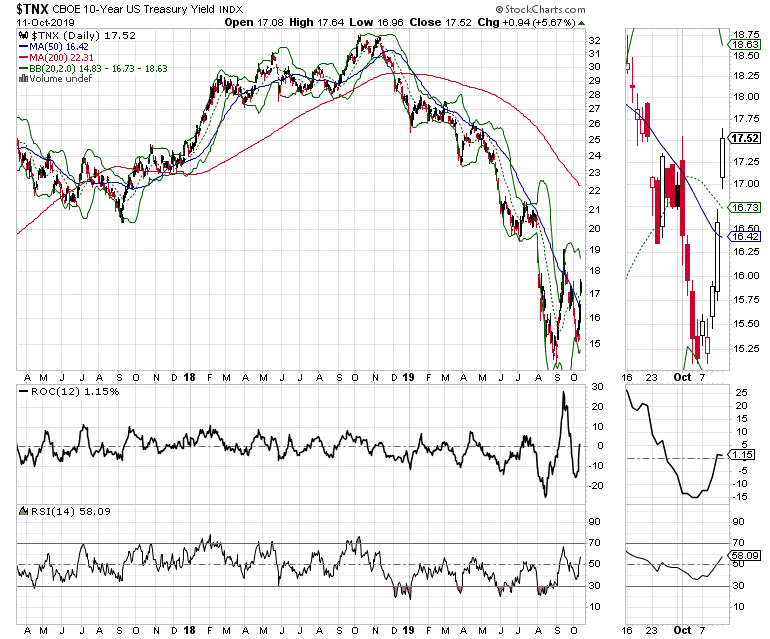 Of course, market history shows that when the public turns bullish it often marks the end of an economic trend, which is why the rise in TNX to 1.75% on Oct. 11, largely in response to the global economy’s recovery potential from a credible U.S.–China trade deal could be very meaningful, especially if yields move rapidly higher. In other words, if the bond market starts to factor in economic strength by raising interest rates, the housing rally could suffer.

Still, this time has the potential to be different, especially if the U.S.-China trade deal proves to be more than just window dressing. That’s because most consumers have learned that their 401(k) plans rise and in value with the stock market and that their borrowing costs, such as through their home equity line of credit (HELOC) are related to the general trend of interest rates, both from the Federal Reserve and the bond market’s reactions to the central bank. Thus, consumers are using their paper wealth and their ease of borrowing as the tools for making financial decisions. 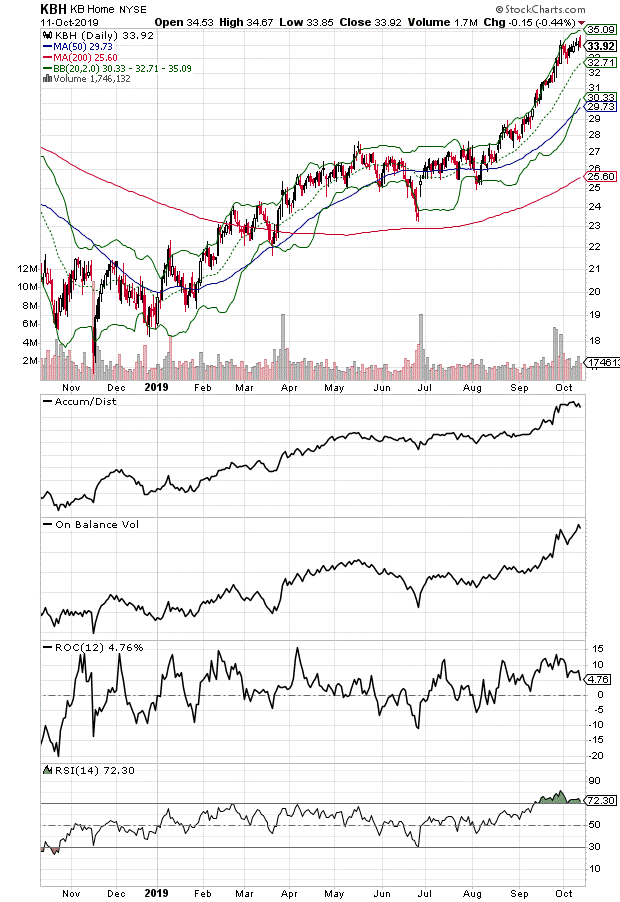 Accordingly, homebuilder stocks such as KB Homes (KBH) and DR Horton (DHI) are also benefiting from demographic changes, supply and demand imbalances, and low interest rates. So, it is this combination of multiple factors and influences along with a generally good employment situation that seems to drive consumer psychology at the moment. 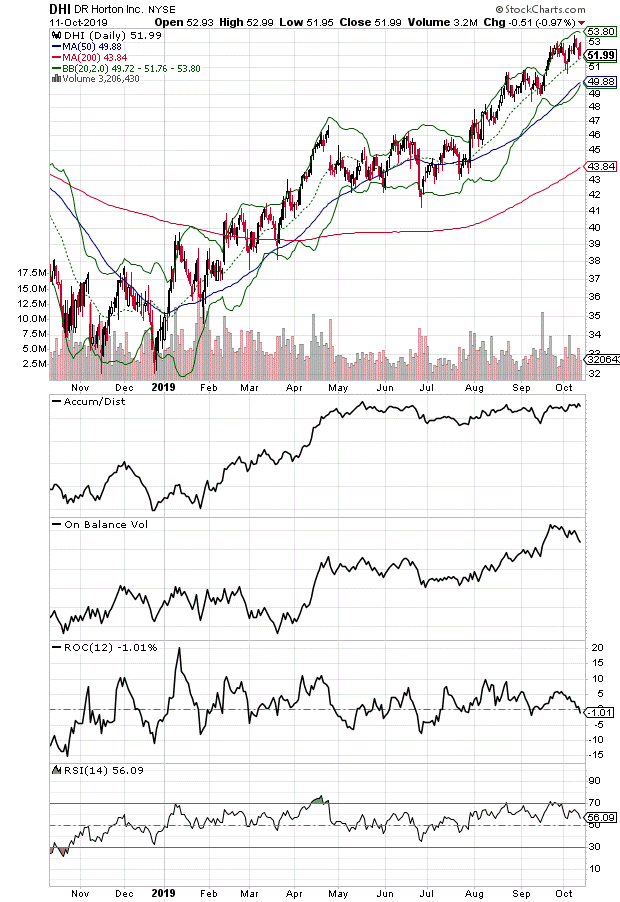 As new homes are purchased, they need furnishings, which is where home furnishings firm RH comes into the picture. The stock has just broken out from a nearly 12-month base and has the potential to move significantly higher, barring an economic disruption and a downturn in housing and consumer confidence. In fact, at this point, the company has raised its guidance for three straight quarters and is expanding its business and continuing to modify its offerings with higher margin items. On Balance Volume (OBV) and Accumulation Distribution (ADI) suggest money continues to move into the stock. 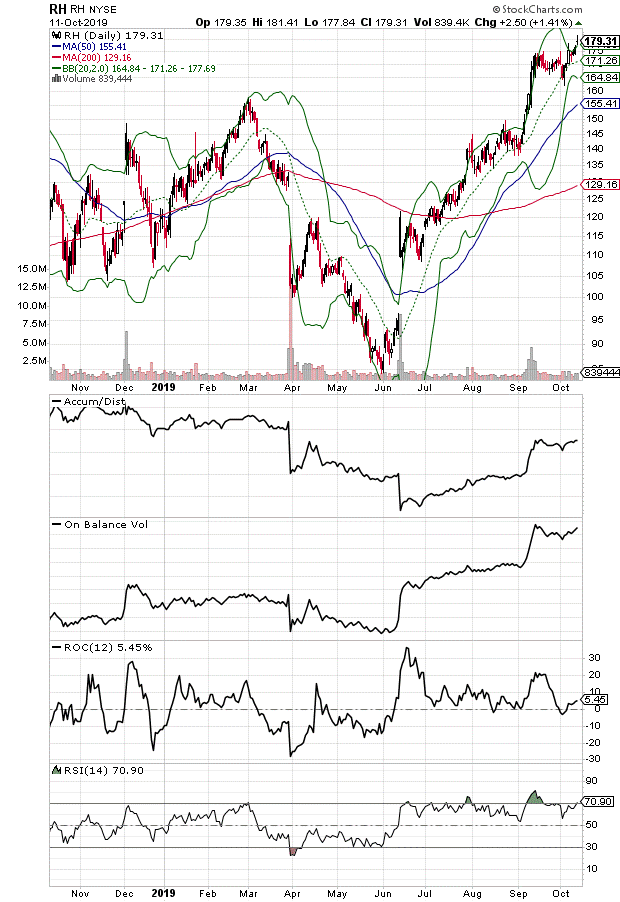 The New York Stock Exchange Advance Decline line (NYAD) failed to deliver a knockout punch to the bears on Oct.11. And although the line hovered at a new high most of the trading session, it failed to close at what would have been an all clear signal leaving the bulls with some room to fret over the weekend. 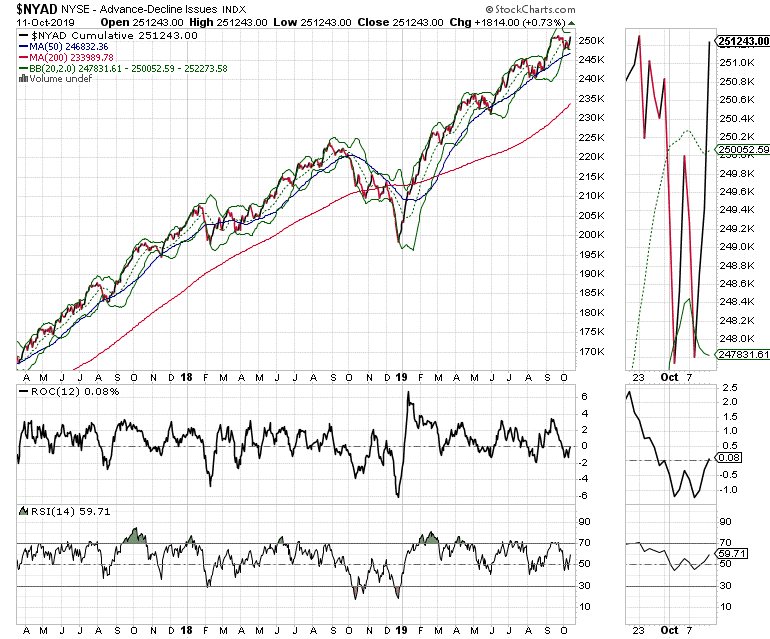 Meanwhile, the S&P 500 (SPX) and the Nasdaq 100 (NDX) indexes gave back a good portion of their intraday gains although both indexes managed to close above both its 20- and 50-day moving averages. 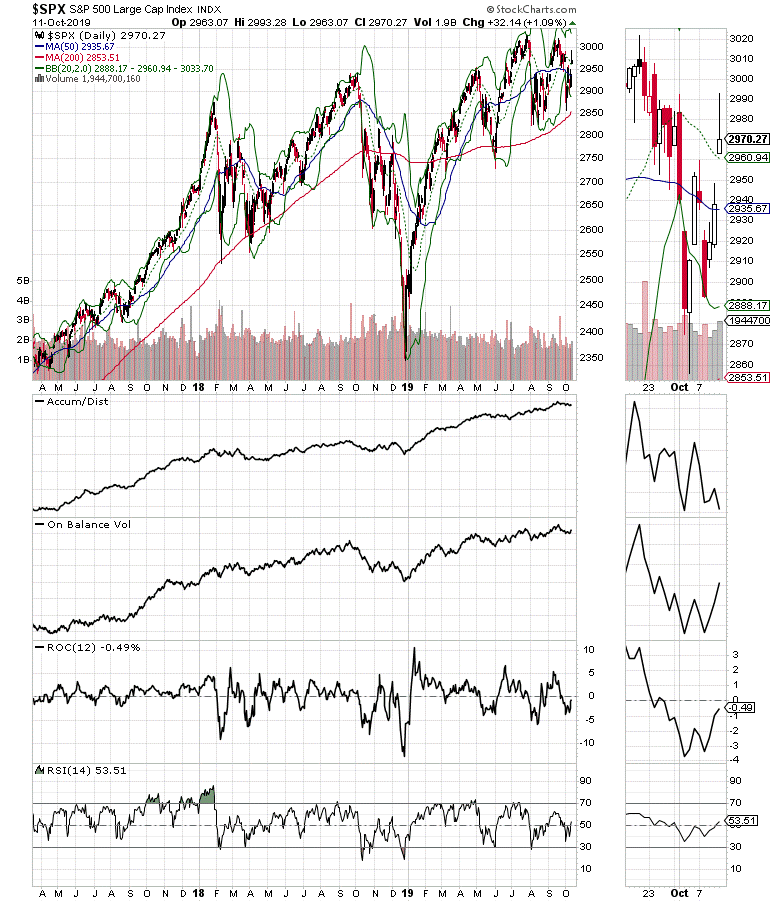 Thus, it’s clear that no one wanted to risk the market crashing on Monday after the trade deal was fully vetted over the weekend for cracks and illusionary language, which may or may not emerge as the details are uncovered. Also casting a shadow over the proceedings was the perception that the impeachment situation may deliver more surprises by the time stocks open on Monday. 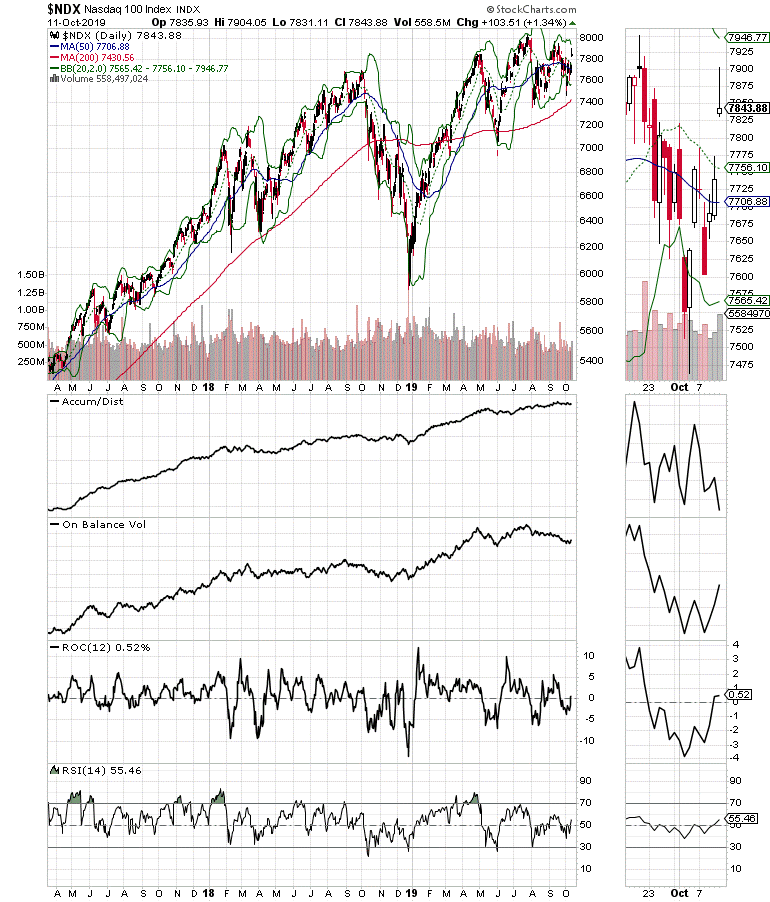 So, the bottom line is that the market remains weary of the news cycle and the effect of algorithms responding violently to any new revelations that could torpedo the market.

What Could Wreck the Bulls?

There is an old song that says: “the future’s so bright, I’ve got to wear shades,” which some may wish to use as a general theme when analyzing the markets conceptually.

Yet in the real world, no matter how high the glitter level is, it’s foolish to trade stocks blindly or while wearing polarized rose-colored specs.

Therefore, it makes sense to stay cautious, to continue with what’s working and to keep all options open regarding hedging, sell stops, and even considering taking profits early. No matter what, the next few trading days should prove to be very interesting.

Market Volatility Ahead?
9 hours ago

It’s time to rotate out of higher volatility stock ETFs into safer assets, according to Joon C...

While S&P Looks to Test 2700, Sell Signal is Weak and May only produce minor initial sell-off, r...

I want to press our exposure to well-capitalized lenders of private businesses with a high focus on ...