This month’s rally in the euro could persist for another month but the overall trend is still bearish, writes Al Brooks.

The EURUSD forex pair looks to pull back from a strong one-month rally in its 21-month bear trend.

The EURUSD has been trading down for 21 months after a strong reversal up in 2017. That low was a lower low major trend reversal (see chart). Traders therefore expect at least a small second leg sideways to up after the current reversal down from the February 2018 high. 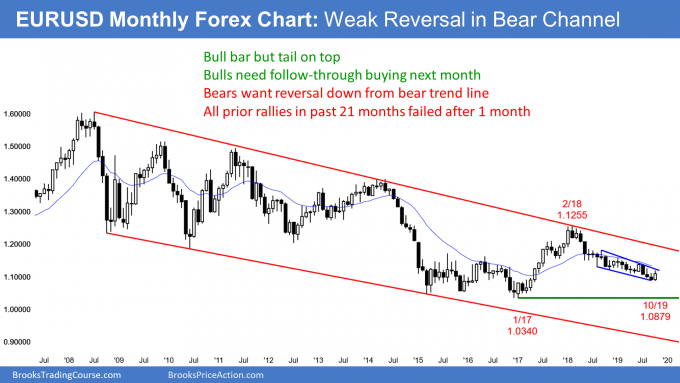 There have been several reversal attempts, but each one failed within a month. This selloff is therefore also probably a bounce in a 21-month Small Pullback Bear Trend. But as long as the selloff holds above the January 2017 bear trend low, traders still see it as a pullback from a first leg up in February 2018, and not a resumption of the 10-year bear trend.

Every bear channel behaves like a bull flag since there is a 75% chance of an eventual bull breakout. Traders expect a bull breakout and a rally before a drop below the 2017 low. The minimum goal is a retracement of about half of the 21-month selloff.

That would also correspond to around the June 2018 high. That was the top of the first pullback after the initial strong reversal down in April and May 2018. The start of a bear channel is always a magnet after a reversal up. But the bears took a year and a half to get down here. The bulls will probably need many months to get back up there.

A reversal up from a Small Pullback Bear Trend is typically minor. That means that the current rally might last a few bars (months), but there will then probably be a test back down.

A second reversal up at that point would be from a double bottom, which would be a major trend reversal setup. The bulls would have a better chance of a more sustained rally to the June 2018 high of 1.1851 at that point. That is a major lower high on the weekly chart (not shown). It is also the top of the first pullback after the early 2018 strong bear breakout.

While the U.S. Dollar retreated against all major currencies last week, it is still the cleanest dir...