Early Tuesday morning, I put out an update to our members of ElliottWaveTrader.net that noted that the 3135 region as the top of our resistance, which can point us lower once struck.

Now, we all know that the “surprise” rate cut by the Federal Reserve should have been viewed as a positive to the market. In fact, most expected the Fed to act soon, and were certain how this would send the market soaring again.

Well, if you were following the market, you would know that the market spiked to the resistance target we noted early Tuesday morning, and then reversed in a 160-point decline in the SPX. Does that sound like the Fed was able to change sentiment?

Unless you open your mind to the fact that the Fed is unable to change market sentiment, you will likely be caught looking the wrong way once this bull market ends in a few years and the Fed then attempts to stem the tide. They will simply be ineffectual, and many may even call for disbanding the Fed at that time. But we are still several years away from that potential.

I keep coming back to the example put out by Elliott Wave International seen in the chart below as to how the government was truly powerless to stem the tide back in 2008-2009. It was only when the market completed its downside sentiment pattern did it seem as though the market turned up due to government intervention. 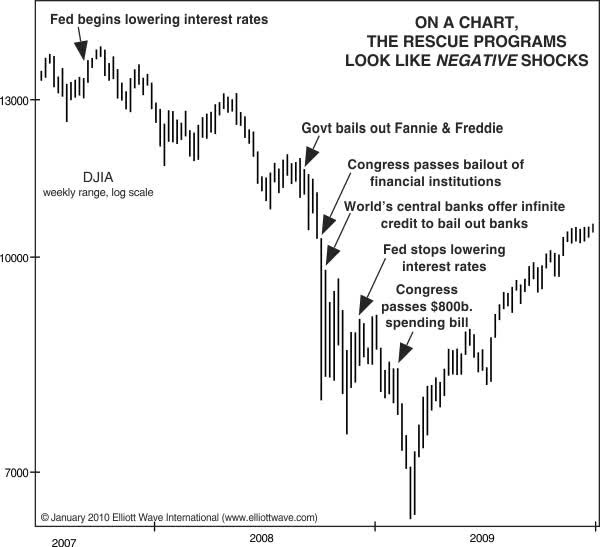 My strong suggestion to those listening is that Fed action will not be able to stem the tide of negative sentiment when it truly turns. Expecting otherwise will certainly be detrimental to your account once this bull market off the 2009 lows completes.

If you don’t understand when that potentially may happen, you may want to join us at ElliottWaveTrader.net, as Tuesday was the perfect example of how we topped ticked this market action for a 160-point downside reversal, which seems to have surprised most market participants, other than members.

Coronavirus Pandemic Is an Excuse, Not the Fundamental Problem
14 hours ago

Despite some notable arguments to the contrary, equity markets were just fine prior to Coronavirus o...

A Contrary Call ConocoPhillips
15 hours ago

It will certainly strike some as odd, but one company I’m feeling positive about is ConocoPhil...

Keep Your Chips on Lam Research
15 hours ago

At first blush, Lam Research (LRCX) doesn’t sound like a good pick in a market worried about h...

We open the week with confusing messaging on both the virus and prospects of cooperation among crude...