Signs of success are fleeting but the signal is that central banks desperately don't want another “Lehman moment” and are determined to do whatever they can. Will it be enough? Only if the fiscal side does not hold back. U.S. Treasury Secretary Steve Mnuchin urged both sides of the aisle to speed up the passing of a second package. California ordered its 40 million residents to stay home. This means that at least 15% of US GDP is inactive. 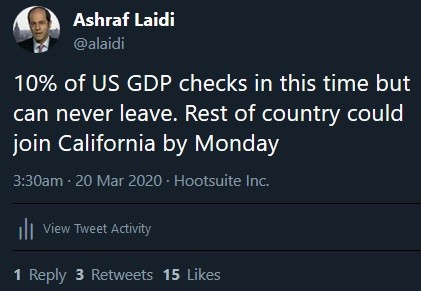 In a sense, the financial crisis was a blessing because it gave central banks a playbook to deal with a sudden stop. If not for the quick and extreme actions of central banks in the past three weeks, we would be seeing cascading bankruptcies and bank failures right now.

The worry is that we've only bought a bit of time. The bond market is particularly worrisome at the moment. The bid/ask spreads are beyond belief. It appears as though all the earlier Federal Reserve programs to provide liquidity simply led to leverage. JPMorgan (JPM) said some bond strategies featured levers as high as 50:1. The dump in bonds this week may simply be levered longs trying to unwind and the Fed has had to step in on the other side to keep rates from spiking.

The response has been astounding, even by crisis standards. By the end of Friday, the Fed will have bought $250 billion in Treasuries – half of the total program. That compares to $600 billion each in QE1 and QE2, which took 14 months and eight months, respectively. QE3 was a pace of $40 billion per month. This week's pace is $1 trillion per month. What's frightening is that yields are still higher on the week.

With regards to equity indices, markets attempt to return towards key retracement levels, such as the 21500 level in the Dow Jones Index and 2550 on the S&P 500.

The panic in the past two days has spread to forex markets. In particular via disorderly moves in the British pound (GBP), Australian dollar (AUD), New Zealand dollar (NZD), Norwegian krone (NOK) and several other countries. The latest program’s show utter resolve from central banks but also desperation. Markets are looking at a three-month lock-in that will trigger far too many solvency events to bail out.

If there's another black swan or some other major break in the central bank dam – like a systemic-company failure – it could still get much worse.

For now, we take it a day at a time and traders will remember that last Friday there was a major squeeze higher in U.S. equities into the close. FX wasn't taken along for the ride and is a better place to watch sentiment at the moment. If dollar demand doesn't slow, central banks may be forced to counter it on the weekend.