The U.S. 30-year Treasury bond futures has consecutive inside bars after a reversal down from an extreme buy climax on its monthly chart. Although the upside is limited, if there is a selloff, it will probably be gradual.

The 30-year bond futures reversed down on the monthly chart at the end of March after a three-month buy climax (see chart). It was the most extreme buy climax in the history of the bond market. 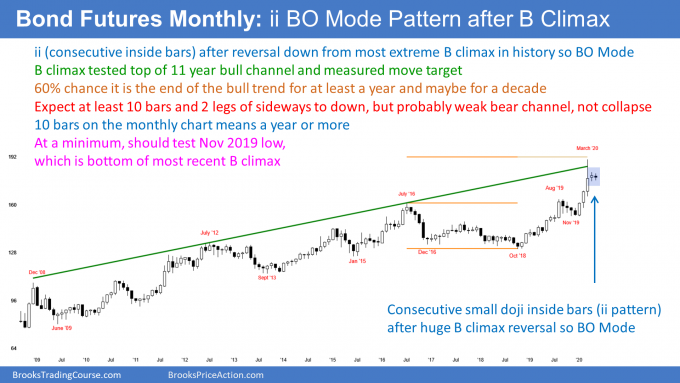 Bond futures on the weekly chart (not shown) have been in a tight trading range for two months. On the monthly chart, May’s high was below April’s high and May’s low was above April’s low. May was therefore an inside bar on the monthly chart.

April was also a small inside bar. There are now consecutive inside bars, which is a two-bar tight trading range. This is an inside-inside (II) setup is a Breakout Mode pattern.

Breakout Mode is both a buy and sell setup

Because it is coming late in a bull trend and after a buy climax, the upside potential is small. The bulls will have a hard time getting far above the March high.

Also, since May was a bear bar, it is a low probability buy signal bar. That reduces the chance of June being the start of a rally up to the March high. If June goes above May, it probably will not get far. The II pattern would then convert into a three-month tight trading range.

Since May had a bear body, it is a good sell signal bar. It increases the chance that a reversal down will be successful.

A successful breakout means about 10 or more bars and two or more legs. The first target for a reversal down from a buy climax is the start of the buy climax. That is the January low. Since that is far below the II formation, a selloff might need a year to get there.