The Fed Has the Market's Back, Here's How to Play It

With the Fed backstopping U.S. equities, here is an option trade to take advantage of that, from Jay Soloff.

Trying to understand the stock market in the middle of a pandemic is a challenge for even the most seasoned of traders. It’s not like the investing world has much to compare to. Sure, the Spanish Flu seems roughly like a similar situation—but that was more than 100 years ago. The markets are far larger and far more complex than they were in 1918.

Still, what we see in today's stock market is hard to explain. On the one hand, economic data is historically bad due to the widespread impact of the Coronavirus pandemic and COVID-19 infections and hospitalizations. On the other hand, after the crash in March, stocks are performing almost as if there's nothing bad going on.

The SPDR S&P 500 ETF (SPY), the most popular exchange traded fund (ETF) on the planet, is down 7% year-to-date, but just 12% from all-time highs. Keep in mind, the index was down 30% in March, so by all measures, there has been an enormous recovery.

Market volatility can be a blessing especially if you know how to play the game. The rules are simple, and I picked them up years ago in the trading pits during a previous market panic.

But how can investors justify the valuation of stocks when the economy is tanking? After all, the pandemic is still going on, and the United States is just starting to reopen. There are a few reasons potentially behind the bullish action of late.

First off, with interest rates basically at zero, there isn't anywhere else to park your money for a decent return besides stocks. Fixed income yields are microscopic. Stocks at least offer the potential for a higher return, and it’s clear that the Federal Reserve has its back. It's especially true of mega-cap U.S. stocks, which have been driving the major indexes higher lately.

Second, the market is forward-looking. The pandemic has been brutal on the economy, which is why stocks tanked in March. However, investors may be already looking months into the future when they expect the global economy to adapt to the aftermath of Covid-19. It’s possible a vaccine is coming as well, but that's much harder to predict.

Finally, and perhaps most importantly, the Federal Reserve is doing everything in its power to keep the markets liquid. The central bank doesn't want a repeat of 2008, when Lehman Brothers failed and the results were catastrophic for secondary markets. By providing liquidity to the markets, the Fed is also propping up prices by default.

So what does that mean for market direction? At least one large trader thinks the S&P 500 could continue climbing through September, but with a cap that is beneath all-time highs. 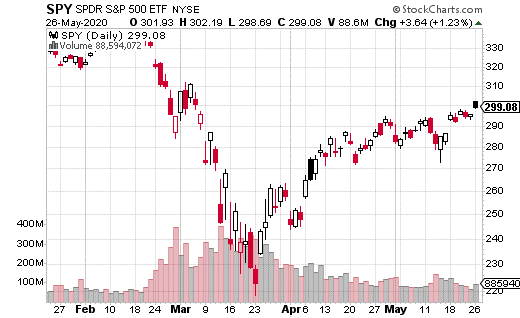 In this case, the trade generates about 2% yield in just under four months. That equates to about a 6% annual yield. Certainly, in a rock-bottom interest rate environment, a 6% yield for the year is not bad at all. Plus, you get the SPY dividend when it is issued and you have another 6% upside potential in stock appreciation.

If you don't think the market is going to tank in the next four months, this is a reasonable trade to make to generate some yield without giving up full upside potential. Though the move won’t protect you if the market has a second leg down, it could be a perfect trade for a sideways market.

Jay Soloff is the Options Portfolio Manager at Investors Alley. He is the editor for Options Floor Trader, an investment advisory bringing you professional options trading strategies, with all the bells and whistles of Wall Street, but simplified so all you have to do is enter the trades with your broker.