Markets: Do you want to be Right, or Do You Want to Make Money?

Famed market technician and collaborator of the late Marty Zweig, Ned Davis, is known for asking the question: “Do you want to be right? Or do you want to make money?” And as crass and cynical as the words may sound to the uninitiated, truer words were never spoken in the context of being a stock trader.

Please don’t misunderstand me. I am as concerned as anyone about the state of the world. It’s impossible not to be when the daily news features a pandemic, riots in the streets of major U.S. cities, and a raging political landscape, both internationally and domestically. Yet, even in these uncertain times there are still plenty of individual stocks with very attractive chart patterns and positive money flows.

oreover, based on the general state of life in the world, the bears could easily justify their negative views on the markets, if they only focused on the news.

On the other hand, from a trading standpoint, it’s hard to be bearish if you look at the technical landscape. We are in uncharted waters as institutional investors have reportedly missed the rally off of the recent bottom and are now wondering if they should play catch up to retail investors who seemingly have taken over the market. And yes, the market could theoretically crash and burn at any moment. But is that possibility any higher today than on any other day this year?

Furthermore, when it comes down to making trading decisions, the number one historically proven external factor which affects stock prices the most remains the actions of the Federal Reserve. And unless I’m wrong, as quarterly statement time gets closer and money managers have to justify their jobs, the odds of the pros moving into the market are likely to rise. What that means is that June, the last month in the quarter may not be too bad for the market as under pressure money managers move money into stocks in order to dress up their books and work on their bonuses. Of course, that means July could get interesting, but that’s not here yet, so we’ll worry about it then.

Certainly, we should not be cavalier. There are plenty of valid arguments as to why there may be a bad outcome down the road in response to the Fed’s massive easing over the last few weeks. And when I look at life outside the markets I am as concerned about them as any person who is aware of what may happen in the future as the debt fueled economy and the global order, which it has fueled finally decides to have a reckoning.

But we’ve known about budget deficits and rising sovereign debt for years. The political landscape has been raging and ragged for at least a generation now.

Frankly, the more we hear and talk about all these things, the higher the stock market seems to go. All of which suggests that, until proven otherwise, stock prices, especially in the era of trading algorithms, are mostly influenced by the action of global central banks. And at the moment, the central banks, especially the Fed are still more than willing to finance the world’s problems in hopes that if they throw enough money at them, they will go away.

Does that mean that they are right? I frankly don’t know. Do we act irresponsibly and throw caution to the wind? Of course not; we trade responsibly, with careful money management techniques, and the prudent use of sell stops. But what it does mean is that from a trading standpoint, we should focus on our individual stock positions and how they react to whatever is happening inside and outside the market.

Copart (CPRT) is one of those companies whose business segment— brokering used car parts between body shops, insurance companies and other interested parties — is not at the top of anyone’s glamour list. Yet, the stock has proven to be a standout in the post Covid-19 rally. Learn more about Copart in tomorrow’s post.

The New York Stock Exchange Advance Decline line (NYAD) delivered a midweek chart breakout, and held close to this positive level as the week ended, a fact that suggests that the most likely outcome for this market, barring a complete reversal, remains one of higher stock prices. Furthermore, NYAD now has increased its bullish profile as it: 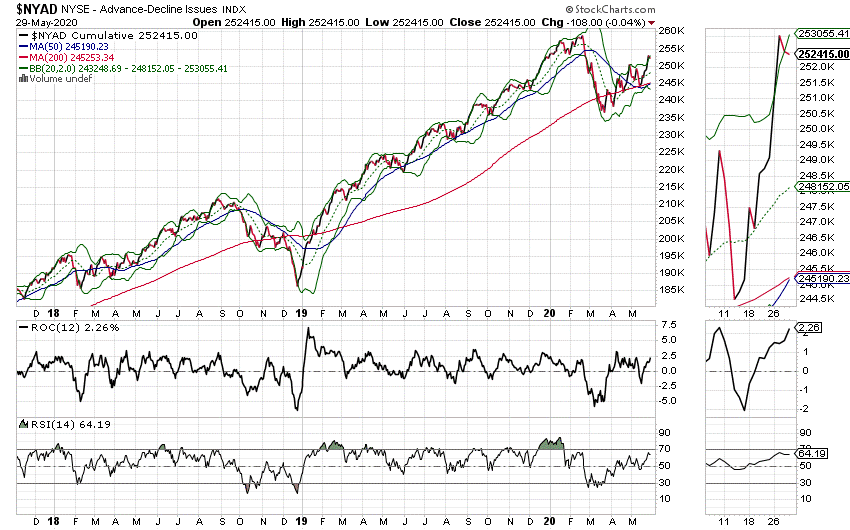 Perhaps, the most overlooked positive sign in the market is that despite the gloom and doom in the air, the S&P 500 (SPX) was able to close the week above its 200-day moving average fully confirming that, at least for now, the U.S. stock market is back on the bullish side of the trend (see chart). 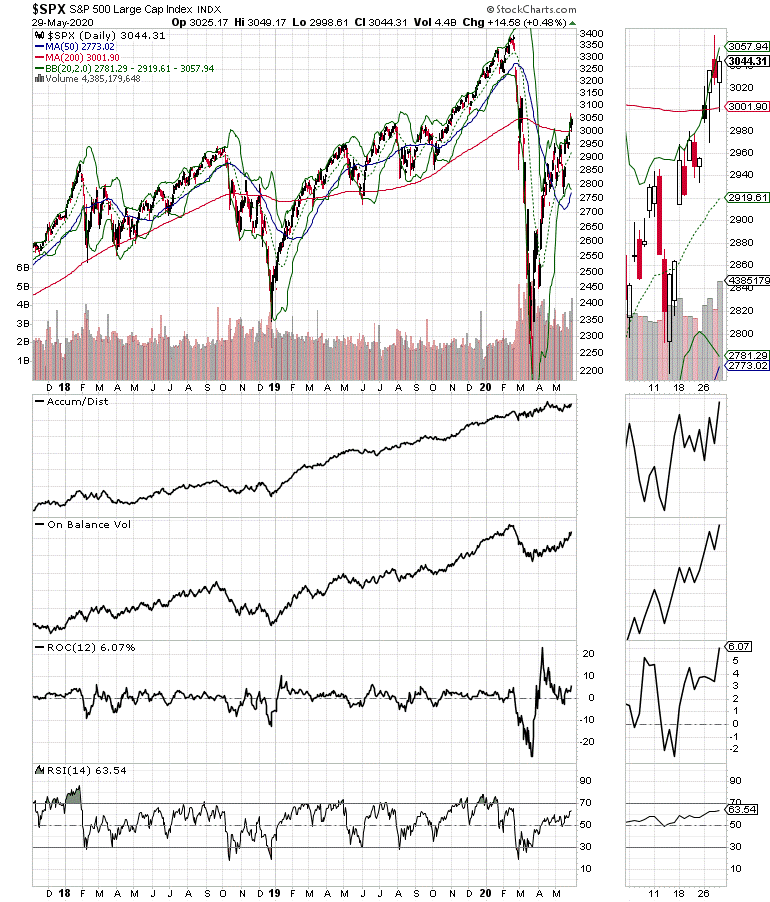 The NASDAQ 100 index (NDX) is within striking distance of its all-time high, also confirming the bullish trend (see chart). 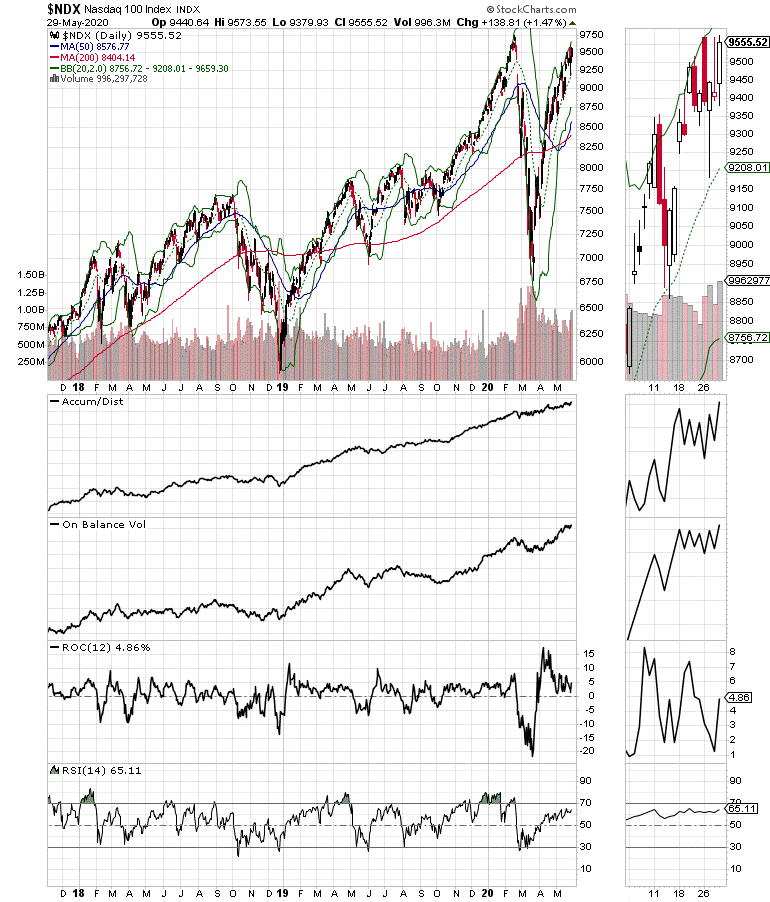 Therefore, the burden of proof has now fully shifted to the bears.

It’s hard to tune out the crazy world we live in, and in our personal lives it’s not a good idea to ignore the reality of the moment. However, when we step into the trading room, the best thing to do is to focus on the price action of the markets and our individual positions.

A perfect example is what happened last week when on Thursday afternoon the market lost all its gains on a news item suggesting that President Trump was going to say something that would bring the U.S.-China trade war back. By Friday, when President Trump actually made his statement nothing of the sort happened and the market moved to new highs.

During this period, there were many stocks which ignored the volatility of the major indexes. If you panicked and sold stocks that were doing well, you likely missed them making higher highs on Friday when what really happened was totally different than what the algos thought they read in the headlines the day before.

The bottom line is that to trade successfully in this market, it’s best to keep an eye on how your own positions are doing, as you watch what the news and the algos do to the indexes. There is no reason to sell into the daily madness. Study your charts, know your companies and mind your sell stops because it’s always better to make money than to be right.

I own shares in CPRT.

For an in-depth look at how I got here and how I analyze the markets check out my May 25, 2020 interview with Stockcharts.com’s David Keller on his show “Behind the Charts” on StockchartsTV. To subscribe to my service, click here.

Crude’s Long Road Back
10 hours ago

Markets Withstand as Civilization Is Under Siege
13 hours ago