Silver Play That Can Earn 8.5% by Year End

Jay Soloff has discovered a silver trade that can earn a high yield in Q2.

When uncertainty grips the market, investors often turn to precious metals for safety; at least they used to. These days, most of the action in precious metals is in gold.

Many investors like gold (and historically other precious metals) because it serves as a currency replacement not tied to any one central bank or government. As such, there are a variety of investment vehicles that can be used to gain exposure to gold. There is roughly the same amount of access to silver-related investments as well.

Silver has outperformed stocks on a broad basis this year but is lagging far behind gold in terms of year-to-date performance. On the other hand, it is up nearly 57% from its low in March. As gold gets more expensive, some precious metal buyers have turned to silver as a more affordable option.

One of the most popular methods of trading silver is by using iShares Silver Trust (SLV). SLV is based on the price of silver bullion (as opposed to silver futures). The exchange-traded fund (ETF) currently has more than $9 billion in assets under management and trades an average north of 25 million shares a day.

At least one well-capitalized trader is bullish on SLV through January of 2021. This trade is using covered calls to express this bullish opinion. Remember, a covered call is when the stock is purchased, and calls are sold against those shares at the same time (and generally at a higher strike than the stock price).

The total premium collected on the trade was roughly $1.2 million. That means the yield on both trades is roughly 8.5% over the next six months. Considering that interest rates are close to zero and SLV doesn’t pay a dividend, that’s a heck of a yield. 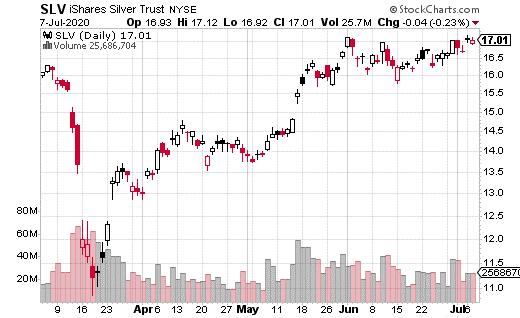 Moreover, because the strikes are set at 21 and 22, SLV can climb and average of $4.50 before capping out. If the price of silver skyrockets, there will be money left on the table, but I don’t think the trader will care too much after hitting max gain of nearly $6 million.

Finally, because precious metals are popular in times of uncertainty, and low interest rates, there likely isn’t a lot of downside to this trade. It’s hard to imagine the price of silver plunging by next January (especially a prolonged drop in the price). In other words, this type of trade could be an excellent way to generate a solid yield and gain exposure to silver’s upside potential.

Jay Soloff is the Options Portfolio Manager at Investors Alley. He is the editor for Options, an investment advisory bringing you professional options trading strategies, with all the bells and whistles of Wall Street, but simplified so all you have to do is enter the trades with your broker.

Want to Learn Butterflies and Condors? Join Me for a Live Training Session on Monday. FREE! Beginner’s Options Guide for Investors Who Have Never Traded Options but Want To. Click Here To Download.

Vista Gold: A Clear View Down Under?
1 hour ago