Jay Soloff describes a recent trade in GDX that may that hint at the growth in precious metals and miners.

We're in the heart of earnings season, with some of the biggest companies in the world reporting last week. Yet almost all the focus in the investment world is on gold and silver. After a long hiatus, it seems precious metals are back in the limelight.

With the top Nasdaq-100 stocks like Apple (AAPL) and Amazon (AMZN) hitting all-time highs, investors may be starting to get concerned about valuations. That doesn’t appear to be the case with gold, which doesn’t trade on some sort of intrinsic value. Silver has more uses than gold as an industrial metal, but it’s also beginning to trade like gold has been trading.

Keep in mind, precious metals are more like stores of value or currencies that commodities. Throughout history (literally 5,000 years or more), these metals have been used as currencies or signs of wealth. To this day, they retain value as defensive instruments.

In recent days, the U.S. dollar has really taken it on the chin. The dollar has lost considerable ground versus other major currencies such as the euro and Yen. This is likely due to the long-term impact of Covid-19, which has hit the US harder than other developed nations. As a result of the dollar falling, money has been pouring into gold and silver.

For the year, gold is up 28% and has hit a record of nearly $1,975 an ounce. Silver is up 37% so far this year but is still just trading around $25 an ounce (well below all-time highs). Can precious metals keep going? As long as the dollar keeps heading south, it’s certainly possible.

From an options perspective, there’s been a significant amount of activity in the VanEck Vectors Gold Miners ETF (GDX). GDX is up 49% this year so far, and at least one well-capitalized trader thinks the good times will continue through the summer.

Because it's just a straight call buy, the breakeven for the trade is at $49.48 at expiration. Max gain is unlimited. Since these calls are $5 out-of-the-money, and because the trade wasn't executed as a call spread (lower cost but capped gains), it appears to be an extremely bullish position. 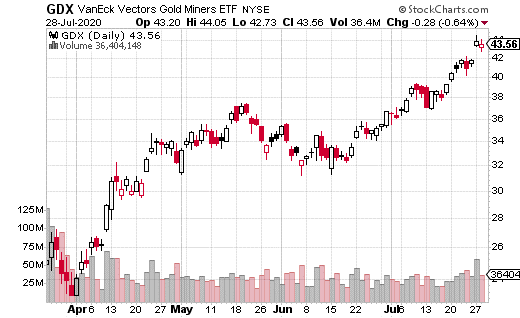 Should gold continue moving higher, gold miners could still have significant upside potential. The last time gold prices were this high, GDX climbed over $60 per share. That could be what this call buyer is expecting over the next two months or so.

In other words, gold miners may be a better value than gold itself, considering gold is at all-time highs and GDX isn't close. GDX also gives you access to several miners, so you aren't just relying on one company to gain exposure to gold.

Jay Soloff is the Options Portfolio Manager at Investors Alley. He is the editor for Options, an investment advisory bringing you professional options trading strategies, with all the bells and whistles of Wall Street, but simplified so all you have to do is enter the trades with your broker.

Want to Learn Butterflies and Condors? Join Me for a Live Training Session on Monday. FREE! Beginner’s Options Guide for Investors Who Have Never Traded Options but Want To. Click Here to Download.