A Triple Shot of Portfolio Caffeine: The Fed, Monster & Starbucks

In an uncertain world all an investor can do is first follow the money and second, try to figure out what the flow of capital means. Certainly, that means that sometimes you have to be a contrarian, albeit with some caution. In fact, two excellent examples of this dynamic involve two stocks which I recently recommended, and which share one common characteristic, the provision of caffeine to the masses: Starbucks (SBUX) and Monster (MNST).

My most recent recommendation in the realm of caffeine is Starbucks, the world’s leading coffee store operator. The stock got clobbered along with the restaurant sector in March 2020 in response to Covid-19 but managed to bounce back with the market in the ensuing months.

It then delivered a lackluster earnings report and began what seemed to be a significant decline. Until, of course, the dip buyers came in. More recently, soon after I recommended it on Aug. 11, the stock has broken out and is now reaching the critical $88 area, above which there is little resistance. The stock has plenty of momentum, however, and looks to have a decent chance to move well above $88, although it could consolidate near $85 in the short term (see chart below). 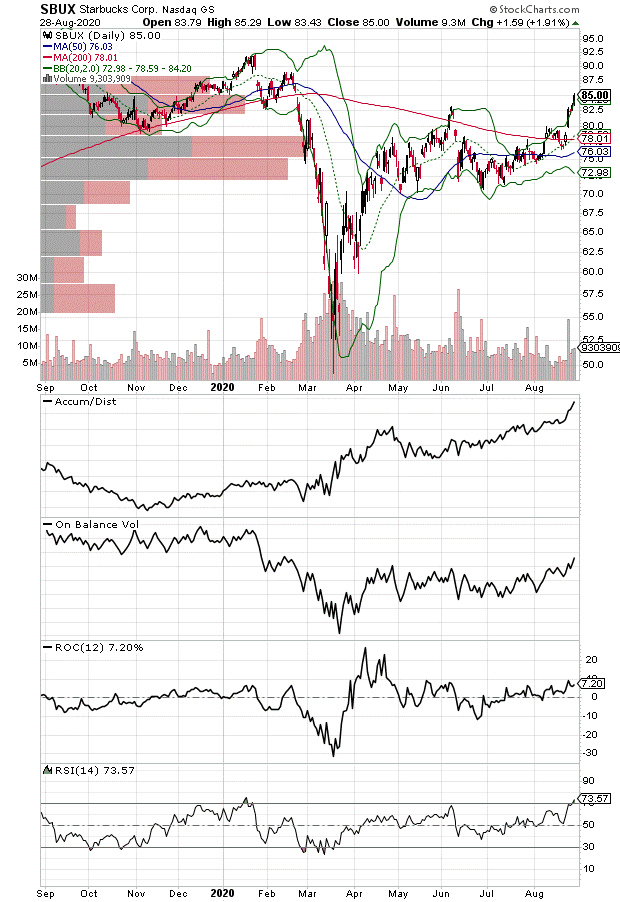 Monster, on the other hand, has been in the Joe Duarte in the Money Options.com portfolio since June 9, and delivered a nifty breakout soon after I recommended it. Unlike SBUX, Monster delivered a better than expected earnings report and gapped even higher before entering its current consolidation pattern (see chart below). 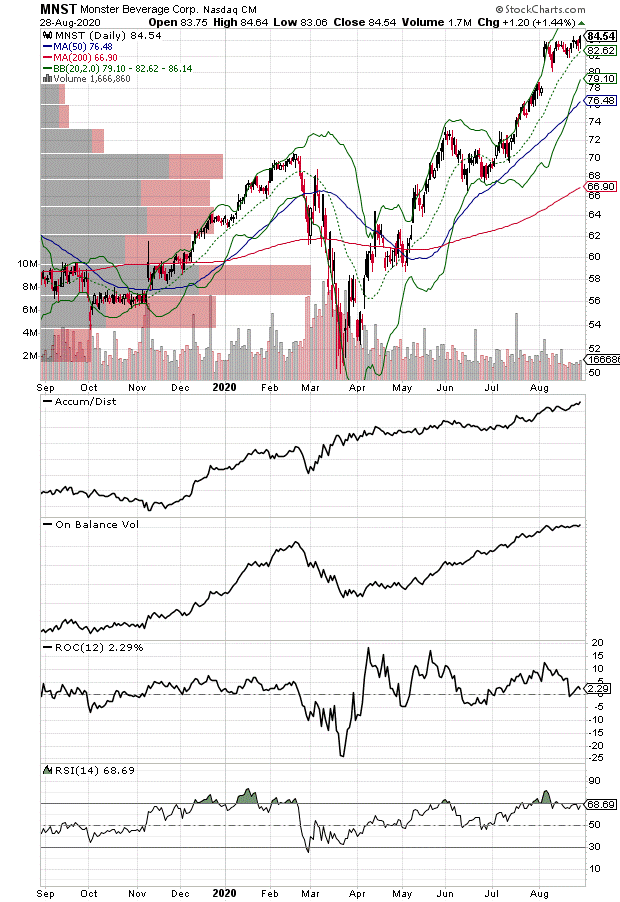 Still, despite its very bullish action MNST looks ready to break out and move above its current resistance area of $85. Both stocks remain under accumulation with On Balance Volume (OBV) and Accumulation Distribution (ADI) supporting the notion that higher prices are likely. And while SBUX has three-year resistance near $98, well above its current levels, MNST is trading nearly $15 above its three year highs.

The bottom line is that we are experiencing an unprecedented Federal Reserve fueled momentum market of indescribable circumstances. And while things will end at some point, these two stocks, at least for now seem to be riding on not a double Espresso high but on a continuous intravenous infusion of extra strength and 100% caffeine.

I own shares in ALB, MNST and SBUX as of this writing.

Joe Duarte is a former money manager, an active trader and a widely recognized independent stock market analyst since 1987. He is author of eight investment books, including the best-selling Trading Options for Dummies. To learn more about stocks such as Starbucks and Monster that are poised for chart breakouts click HERE for a Free trial to Joe Duarte in the Money Options.com.