At the Edge of Chaos: Will the Fed Resort to Bazooka 2.0?

Investors should be concerned in this market but should not rule out more upside action in the not-too-distant future. That’s because despite the precarious nature of the moment the bulls continue to buy the dips at critical support levels, which means that the entire story for this market may not be completely written, states Joe Duarte.

In fact, the stock market’s uptrend bent, but did not break last week as upside momentum has clearly dampened but miraculously has not completely broken down. Still, astute investors, who have been raising cash due to taking profits and getting stopped out of big winners over the last few weeks should hold onto that cash for now as we all wait to see what the Federal Reserve and the algos do next as the election season turns red hot and geopolitical hotspots multiply.

Will the Fed Have to Resort to Bazooka 2.0 to Keep Stocks from Crashing?

Last week in this space, I wrote: “Certainly the writing’s been on the wall for the past few weeks as the market’s breadth, as I’ve noted repeatedly, has been weakening.” Nevertheless, the market has not fully broken down because of the way trading algos are programmed and the Federal Reserve is still pumping money into the banking system.

At the same time, nothing is etched in stone. So even though the stock market historically responds to the Fed’s monetary policy, it should be noted that in March 2020, when the Fed decided to move into action it did so with aggressive measures not seen before by adding $300 billion to the banking system on March 24, and following it with another $150 billion on March 30. Since then, the Fed has not stopped its operations and is still injecting $80 billion per month, which will continue into the unforeseeable future. So, the big question is whether the Fed is pumping enough cash into the system to keep the stock market from breaking below key support or whether they have to resort to yet another nuclear money blast.

Investors are caught in the middle of three major influences: the election, the Fed, and the algos. Certainly, the big boogeyman now is the election. As each new poll and each new headline comes out, the market responds. On the bright side, the Fed will continue to push money into the banking system, with the big question being how much?

The algos in contrast, follow the order flow and magnify the trend with their front running of all trades. So if sellers take over, the algos will magnify the down side. But interestingly, despite all the algo maneuvers the market has not broken down, which means that there are enough buyers left who are buying the dip.

So if the buyers keep moving in, at some point, the selling will be exhausted. And that sets up the potential for another virtuous cycle, as the Fed continues to push money in, and the algos will start to push prices higher as we saw in March-August.

Even in the most volatile markets, some stocks hold up better than the rest. And one of them, of late, is Archer Daniels Midland (ADM) whose shares have shown serious relative strength over the last few weeks, while notably displaying insider buying.

With this in mind, it’s important to dig a bit further. Traditionally known for their roots in corn and their fortunes being tied to the ethanol and grain markets and the volatile effect on their shares of weather and crop cycles, the company has been quietly shifting gears and have become more of a science project delving into researching and creating non-GMO and organic food ingredients and components aimed at changing health tastes along with developing a wide array of natural and lab made sweeteners and flavorings.

In other words, investors who view ADM as an agricultural company are missing a big part of the story. And it is that new dimension and its positive effect on the bottom line, which is moving the stock steadily higher. 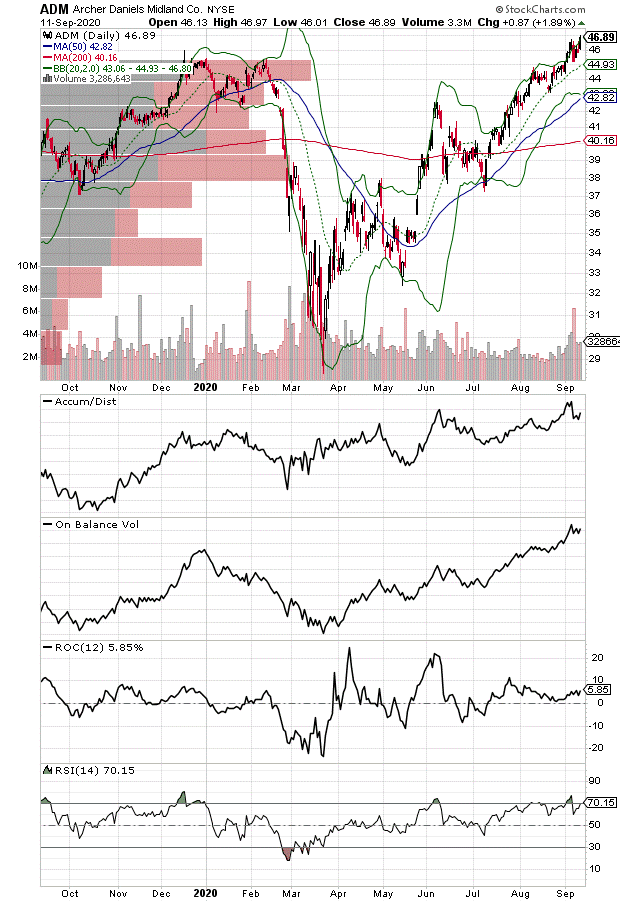 Interestingly, the company has been slowing selling off many of its traditional businesses and making acquisitions to position itself not as a farming company but more of an applied science company, which caters to rapidly growing areas of the food market, especially health-conscious markets and the rapidly growing pet food sector.

Certainly, in a volatile market, making big bets on any stock is not a good idea. Nevertheless, ADM has been under accumulation lately, as shown by Accumulation Distribution (ADI) and On Balance Volume (OBV). The stock has good support at its 50-day moving average, which means that trips to that area, if the market falters, could offer an opportunity to enter the stock, of course, with well places sell stops.

The New York Stock Exchange Advance Decline line (NYAD) crossed below its 50-day moving average several times last week but did not close below the key support level. That’s a positive for the bulls as the second component of the signal, the RSI for NYAD closed at 45. When both events occur simultaneously the sell signal materializes.

If there is a sell signal it would be the fourth signal since the election of 2016, with previous signals noted in the bullets below:

Each of the three sell signals led to a dramatic selling spree, with each succeeding selling spree being more violent than the previous one. The most recent was in March of 2020 when the S&P 500 (SPX) was down 30% in six weeks. So, if the pattern repeats, it is possible that the selling could be worse than what we saw in March. But that is not certain given the way the indicators have held up so far during the recent correction. 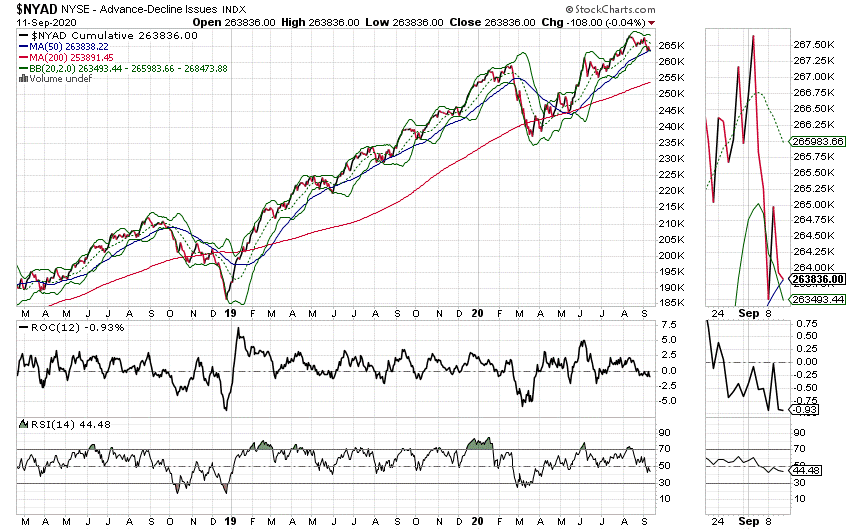 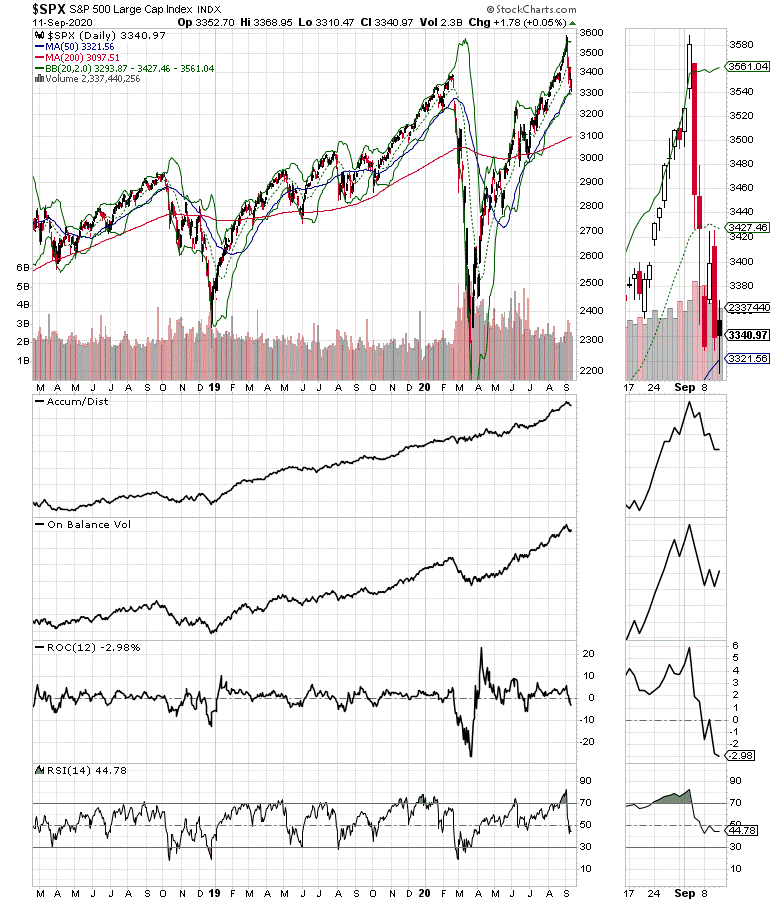 The Nasdaq 100 index (NDX) has already delivered a 10% pullback from its recent highs and is now testing support at its 50-day moving average, below which it marginally closed on 9/11/2020. Below the 50-day line there is little support until the 200-day moving average near 9500. So, if NDX breaks and heads lower the potential loss there would be some 23% or so. 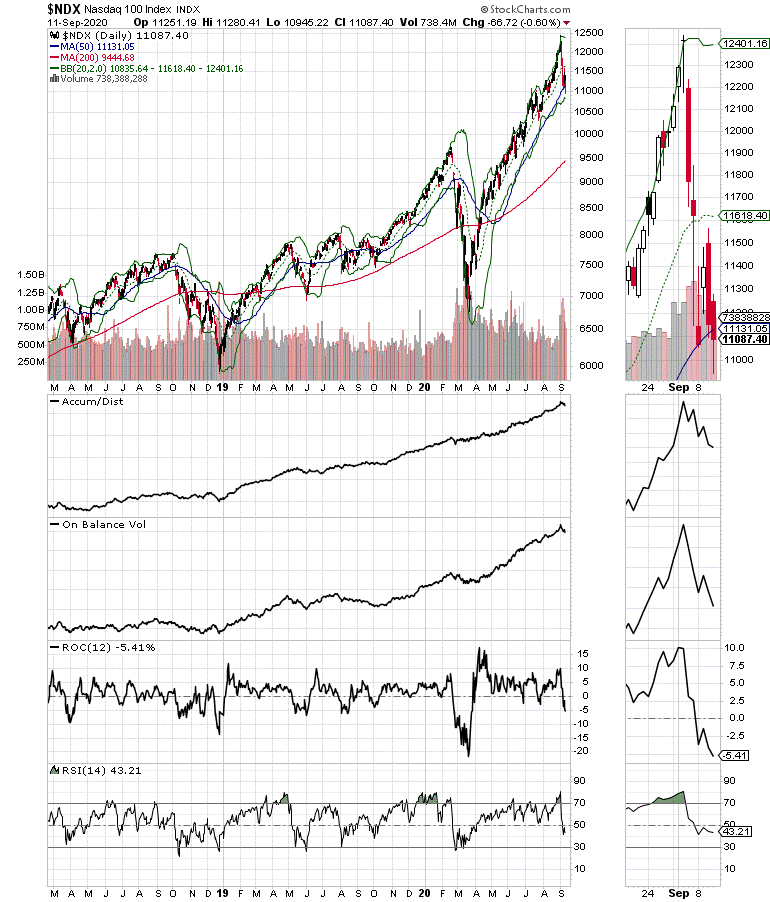 Moreover, if NDX breaks below its 200-day moving average, because of the way the algos are programmed, the selling would likely accelerate, which would set up a vicious cycle where selling begets more selling and so on.

I took a road trip from Dallas to West Texas last week and I noticed several things, which suggest that MEL, the complex adaptive system composed of the markets (M), the economy, (E) and people’s lives and financial decisions (L) continues to adapt to the post-COVID New Normal.

First, the truck traffic on the road was huge, easily dwarfing automobile traffic, which was also fairly steady. Interestingly, the trucks, especially through the Permian Basin, known for its oil and gas exploration and drilling, were carrying large amounts of heavy equipment likely to be used in energy as well as other industrial endeavors. Much of the equipment being carried looked to be related to large factories. Moreover, the number of out-of-state license plates, Arizona, Colorado, California, New York, Nevada, Oregon, Tennessee, and Pennsylvania was a constant throughout the region and also the highway, much as what I see in Dallas. 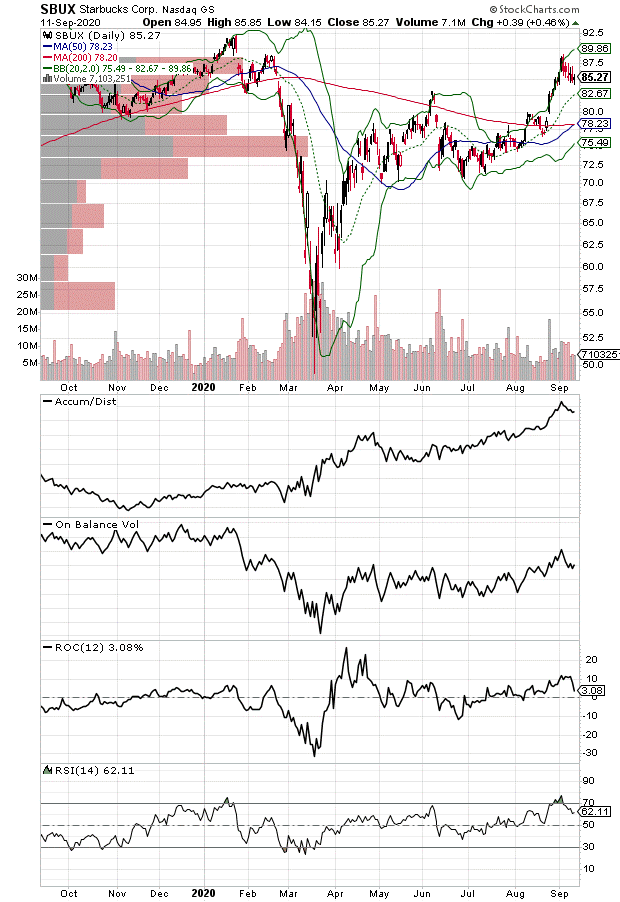 Restaurant drive-thru windows were very busy on the road and in all towns along the way, with many outlets employing two drive-thru lanes manned by mobile order taking humans with the orders fostered through the process by other humans. Among the most consistent crowded lanes were those at Starbucks (SBUX), whose stock continues to hold up even during the current market selloff.

Finally, my hotel was fairly full and doing business but nothing like it has seen in the past. Other hotels in the area seemed more crowded. Moreover, the hotel restaurant was closed, while other restaurants in the neighborhood were doing mixed business, but mostly in the drive-thru lane although a couple of Brinker-owned Chili’s (EAT) had some inside dining business.

We’ll see if the economy takes over the helm at MEL again or if the market selloff takes a toll on the economy.

The market has yet to break key support. Nevertheless, at the moment, raising cash is a better tactic than trying to hedge via put options or inverse ETFs. That’s because the algos move so fast that if the current down trend reverses in a few days or when a longer-term tradable bottom materializes, the odds of losing big money on hedges will be pretty high.

A better alternative is to hold on to the cash raised from profit taking, as I’ve advised, over the last few weeks, or from getting stopped out of any open position, especially of late as the selling has accelerated.

In other words, this is a good time to step aside, put together a solid BUY list and wait. If the bottom materializes in a few days or a few weeks, being ready is better than being poor.

I own shares in SBUX and ADM as of this writing.

Joe Duarte is a former money manager, an active trader and a widely recognized independent stock market analyst since 1987. He is author of eight investment books, including the best-selling Trading Options for Dummies, rated a TOP Options Book for 2018 by Benzinga.com - now in its third edition, The Everything Investing in your 20s and 30s and six other trading books.

To receive Joe’s exclusive stock, option, and ETF recommendations, in your mailbox every week visit here.