The stock market’s uptrend seems to be hanging on by a thread, yet the Federal Reserve has made it clear that it will continue to pump liquidity into the banking system, states Joe Duarte of In the Money Options.

This will be to the tune of at least $120 billion per month, a $40 billion increase from its recent easing, while keeping interest rates near zero until 2023. Moreover, despite the recent selling, history shows that under normal circumstances, this type of central bank action should be creating a virtuous cycle where a rising stock market, which is now leading the economy as the number one influence in the complex system composed of the markets (M), the economy (E), and people’s lives and financial decisions (L) should be moving higher.

In other words, unless this time is really different the current stock market selloff should pass, and the uptrend should resume. On the other hand, if the current relationship reverses and market decline continues, then the economy will likely slow and the virtuous cycle could reverse and turn into a vicious cycle. Nevertheless, there is no substitute for being ready for any contingency, as I discuss directly below.

Is $120 Billion per Month Enough for the Algos?

Last week in this space, I noted: “Investors are caught in the middle of three major influences: the election, the Fed, and the algos,” while further noting “so the big question is whether the Fed is pumping enough cash into the system to keep the stock market from breaking below key support or whether they have to resort to yet another nuclear money blast.”

Indeed, the Fed decided to deploy at least a mini bazooka last week by increasing its monthly market operations by one third, an amount that was good enough to kick the high frequency (HFT) computer trading programs into a more aggressive buy mode for about an hour before the selling resumed. Thus, it’s clear that for now, the algos seem to want more from the Fed, so here are three things to consider if things don’t change:

What it all adds up to, is that until proven otherwise, the likelihood of an uneven market are on the rise until we get some real election clarity, which may or may not come before the end of the year. Of course, the entire scenario may change due to other external developments, especially in the geopolitical arena, such as if the polls suddenly reveal that one side or the other is finally gaining the upper hand decisively.

Trading Principles Remain Key to Success in this Market

As the bull market ages and the election nears, it’s reasonable to expect market volatility despite the Fed’s increase in its money infusion into the bond market and the financial system via its bond and ETF purchases. As a result, it’s important to review our sound trading principles:

Big Momentum Surge May be in Store for Extra Space Storage

Shares of the #2 self-storage company in the US, Extra Space Storage (EXR) have been steadily rising over the last few weeks but are now reaching a price point, near $112 where momentum investors may start to add to positions aggressively if the stock can survive the current general market pullback. Moreover, if the stock holds up in the next few days, the current mild downdraft may be a good opportunity to buy on the dip. 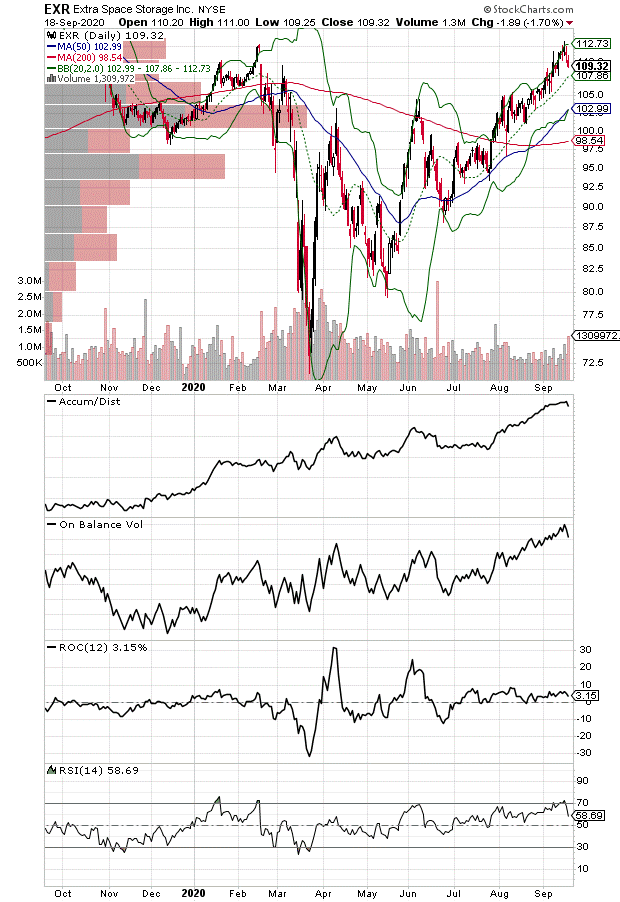 The company has certainly benefited from circumstances over the last few months and has recovered well from the initial Covid-19 market-wide decline. Specifically, the migration dynamic from large cities has been quite beneficial as limited capacity from movers has led to a rise in demand for storage. In fact, as people wait for their new homes to be built or vacated in the suburbs or even in new cities, the demand for storage in new destinations is also growing. Of course, there is the potential for trouble in collecting rent for spaces if the economy slows, but for now buyers are in control and momentum is rising.

Especially bullish are the rise in Accumulation/Distribution (ADI) and On-Balance Volume (OBV) along with a small Volume by Price (VBP) bar near $112. In fact, the key is the VBP, which is providing a last point of price resistance. If the stock can clear this barrier, the likelihood of a buying surge will increase as momentum investors and HFT algos will likely pile into the stock. At this point, if the stock can clear this final shelf of resistance, it could well move into the $120 area fairly quickly, barring any major external market wide problems.

NYAD Ends Yet Another Week on the Brink of Sell Signal

The New York Stock Exchange Advance Decline line (NYAD) closed the week at its 50-day moving average while the RSI for the indicator closed below 50, giving us yet another near but not fully developed Duarte 50-50 sell signal. 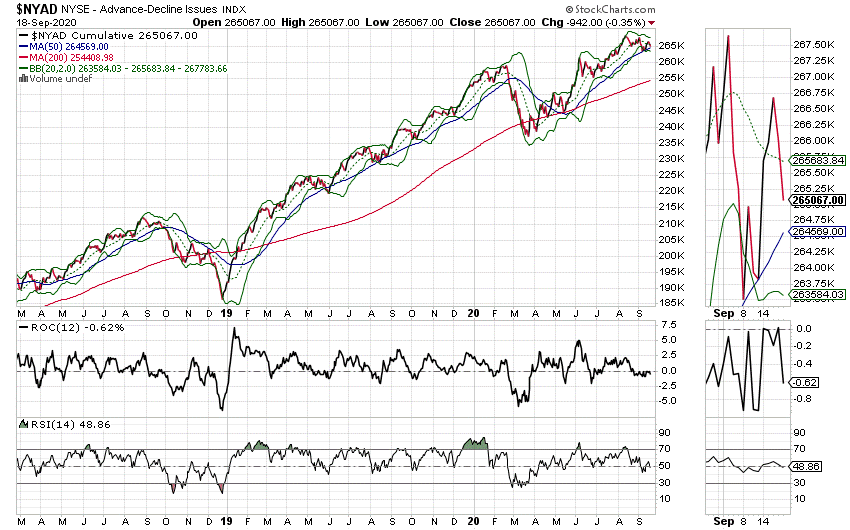 As I’ve noted here previously, if this becomes a full-blown sell signal it would be the fourth signal since the election of 2016, with previous signals noted in the bullets below:

Moreover, since each of the three sell signals led to a dramatic selling spree, and since each succeeding signal preceded a more violent selling spree than the previous one, and with the market having a lot to think about these days we could see a huge decline, perhaps even in a short period of time. Specifically, the most recent was in March of 2020 when the S&P 500 was down 30% in six weeks. 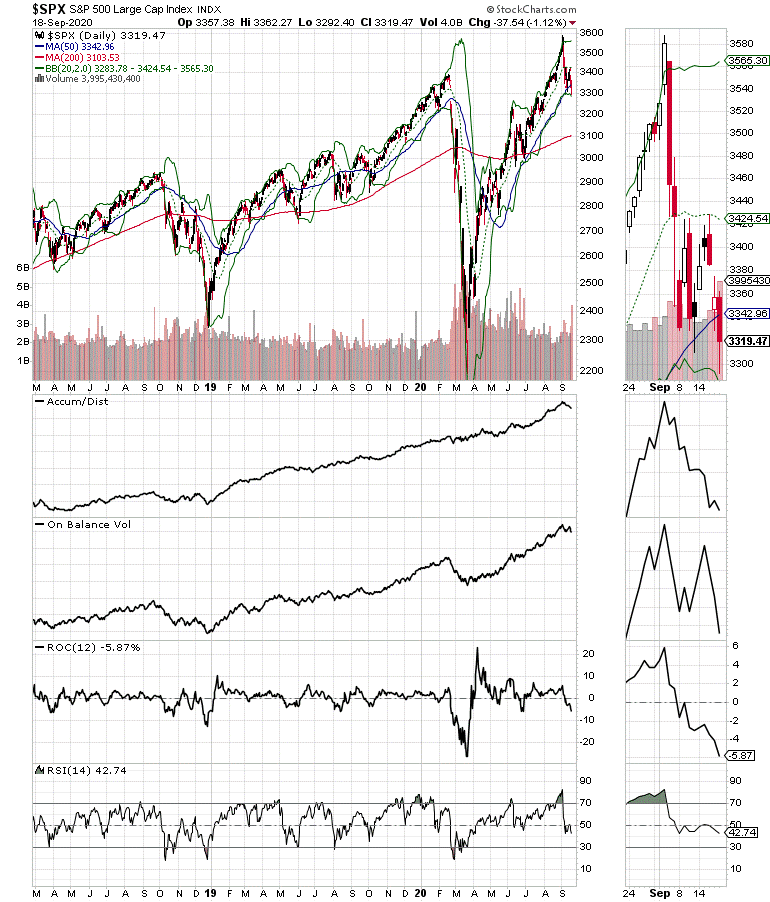 For their part, the S&P 500 (SPX) and the Nasdaq 100 (NDX) indices are both showing fairly weak trading patterns of late with the latter being the worse of the two as aggressive sellers have been pummeling the technology sector. 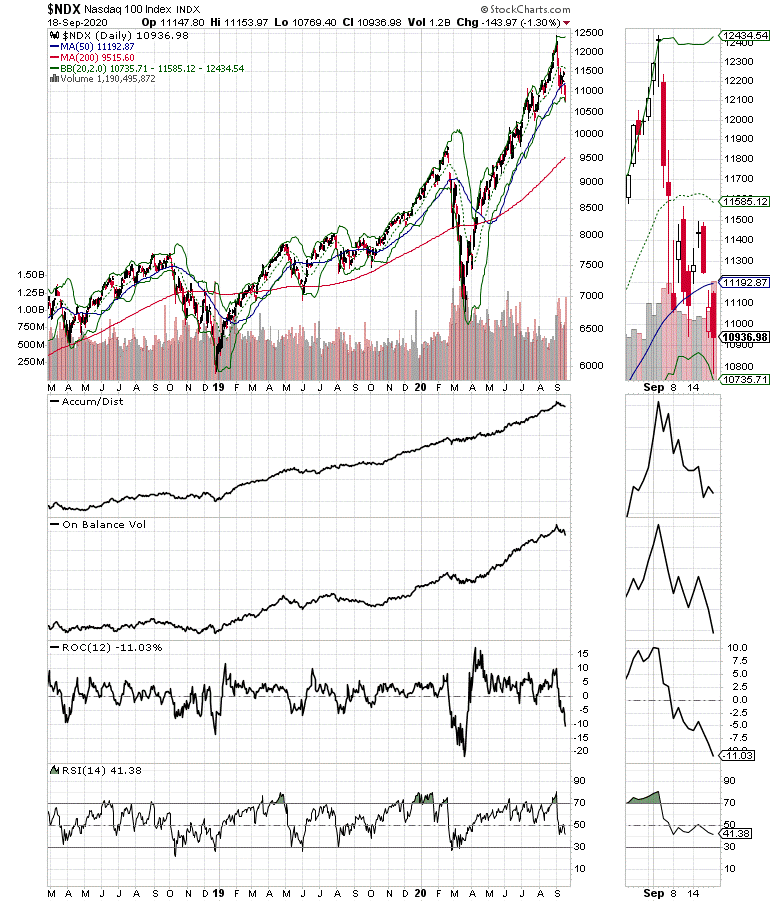 In fact, both SPX and NDX have already delivered their own version of the 50-50 sell signal, which should raise concern among investors, unless these events are not reversed.

Don’t Fight the Fed but Be Selective and Consider Options

With stock market valuations near record highs and a bumpy election taking shape, it seems counterintuitive to wish to buy stocks. But in some cases, that’s the current situation faced by investors. And to be frank, given the potential for rapid market swings, the current market is not for everyone.

Nevertheless, active investors should continue to cautiously trade the dominant trend, which until it is clearly reversed remains to the upside as the Federal Reserve’s easy money works its way into the stock market moving stocks higher. Of course, given the fact that a fool and his money are soon parted, it is imperative to follow sound trading principles including sticking to strong stocks in strong sectors, to deploy well-applied sell stops, and to stay disciplined by taking profits where appropriate, while also trading in small-to-moderate lots in order to prevent portfolio volatility.

Finally, as stock prices have come down, the spread in the options market have improved and due to increasing participation by individual investors liquidity seems to have improved a bit. What that means is that it’s a good time to use options once again as risk management and income vehicles.

Last week the Dow was sitting right on the magnet line that has navigated the action (on either side...