With the Federal Reserve steadily pushing money into the banking system, the only thing left to happen in order for a significant move higher, pre- or post-election is some kind of stimulus package deal, states Joe Duarte on In the Money Options.

Moreover, barring something extremely catastrophic, as long as the deal gets done, even if it can’t be implemented before the election, the potential for an acceleration of the uptrend remains intact.

In addition, perhaps the most interesting development is the fact that although money has been rotating out of large-cap tech stocks, it’s been difficult to find where it’s been moving due to the market’s volatility. Yet, as I note just below, this may be starting to change.

Nevertheless, if there is a caveat that could blunt the bullish thesis for stocks, at least in the short term, it is the election. This is especially cautionary given the likelihood of both sides ramping up sensational news and allegations about the other side over the next few days.

The Federal Reserve’s recently released its Permanent Open Market Operations (POMO) schedule for the next monthly period, which details that the central bank will continue to buy $80 billion worth or Treasury securities per month, in addition to $40 billion in mortgage-backed securities plus an additional $1.5 billion in Fannie Mae mortgages. Even more interesting, the Fed is also scheduling the purchase of collateralized mortgage-backed securities (CMBS) in October. This brings the total amount of scheduled purchases to nearly $125 billion per month, annualized at nearly $1.5 trillion per year until at least 2023.

Now, let’s think about that for a bit. The Fed will infuse a scheduled $4.5 trillion into the bond market and the banking system over time for the foreseeable future. Furthermore, given past statements and actions, the Fed also has signaled that there really is no limit to the amount of money that it will throw at the economy for as long as it takes in order to keep it from collapsing, as warranted.

Certainly, we can argue whether helicopter money will work or not or what the implications of these actions will lead to in the future. But at the moment, the Fed’s actions are having one very simple effect on the stock market, making every dip a potential buying opportunity until proven otherwise.

Shares of medical equipment giant Medtronic (MDT) are closing in on a key resistance area near $110 on very steady volume without tripping any significant alarms, a sign that some value seeking money is quietly and finally moving in and that a quiet breakout is within the realm of possibilities. 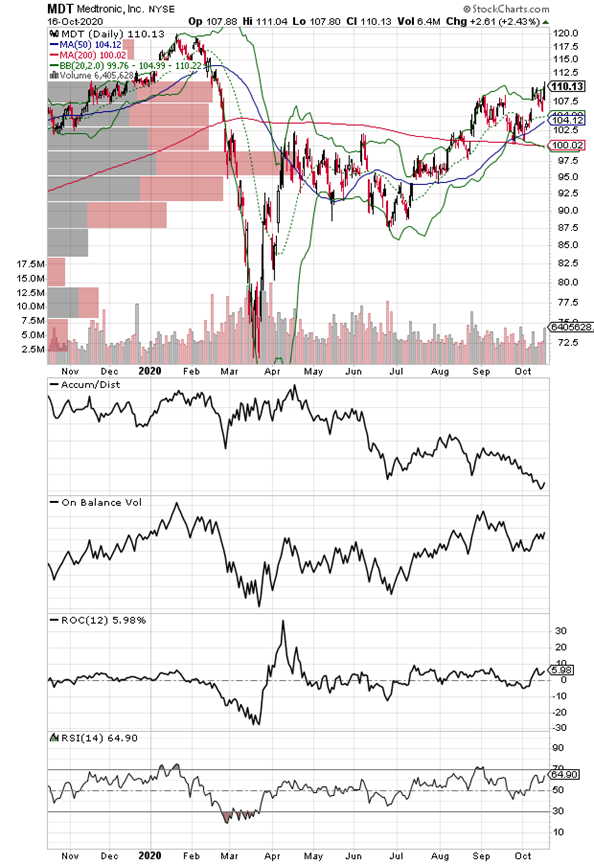 The stock took a tumble as the Covid-19 pandemic raised uncertainty about the company’s earnings and revenue prospects due to the postponement of elective procedures in the spring of 2020. This was especially painful since MDT gets its cash flow based on pacemakers, spine related surgeries, and heart valves among other highly specialized products, which are usually surgically implanted on an elective, scheduled basis rather than as emergencies.

However, as the Covid-19 medical environment for elective procedures has improved, MDT has also seen its fortunes improve, while the market has mostly ignored the situation. That’s why when the company recently increased its revenue forecast and outlook, it took a bit of time for money to start moving in, although that is starting to change. In fact, the stock looks to be very early in what could be a 10-15% move over the short term given the very steady volume over the last few trading days.

Certainly, the move has not yet begun to be noticed via the Accumulation Distribution (ADI) indicator, but On-Balance Volume (OBV) is starting to move up confirming raw volume’s positive tilt. More encouraging is the fact that MDT is above its 50, and 200 day moving averages and that there is very little price resistance above the $110 area as signaled by moderate sized Volume by Price (VBP) bars. Thus, all things considered, a move back to $120 is well within the cards over the next few weeks as investors start to price in better than expected results when the company reports on November 24.

I took another trip to West Texas this week and saw an increasingly active oil sector, which is why I’m wondering if oil stocks will continue to act like dead money for much longer.

Let’s get to the details. You can tell you’re getting somewhere on I-20 West as you near the Permian Basin. For one thing, as you approach the Midland, Odessa, Monahan’s area, there is rising construction activity, both in the way of highway expansion, as well as what I didn’t see there just a month ago; housing construction. Indeed, massive fields are being cleared near the highway suggesting that more building is coming. Whether that means more oil wells, more housing, or something else will require another visit in the future.

As you drive through, it’s hard to miss the fact that truck traffic gums up the highway and that truck stops are humming with roughnecks buying ice and energy drinks as they fill up their pickup trucks and zoom to the next rig. And it’s not just the highway that is crowded, the side roads are now full of traffic, especially company trucks zooming by.

In fact, the number of Pennsylvania and Ohio license plates, suggesting that oil workers from other fracking states are moving in due to production increases in Texas, has increased from the last time I was there just a few weeks ago. Moreover, and most important, the number of oil derricks that are bobbing up and down is increasing, even as new fracking platforms are starting to sprout up all over the place confirming the notion that demand for oil is rising and that the Permian Basin is starting to answer the call.

All of this activity and the haze in the air from all the natural gas flaring, an indication of rising oil production, is not the picture of an industry whose bellwether stock, Exxon Mobil is near its 52-week lows. Indeed, what I saw begs one simple question. Are we near a resurgence of the oil patch? 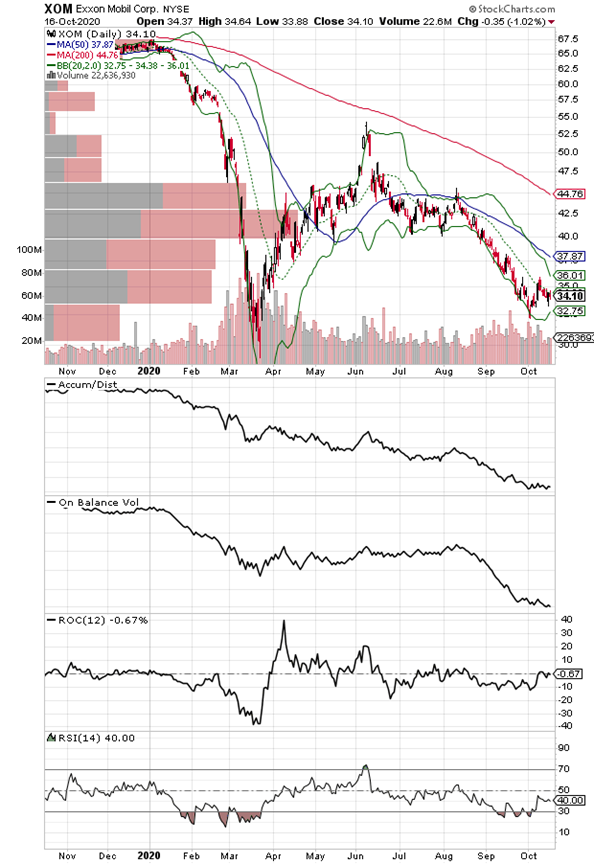 Indeed what I saw on the ground confirms the latest data on the Baker Hughes rig count, which bottomed out a month ago, and which suggests that the physical oil sector is starting to anticipate a potential economic recovery. Perhaps most important is to what degree this sentiment has started to work its way through the economy, as suggested by the most recent consumer confidence data and to what extent this emerging dynamic may have on the Presidential election.

The overwhelming opinion in the media is that Wall Street is betting on a Biden win. But Trump’s calling card is the economy. Stay tuned.

The New York Stock Exchange Advance Decline Line (NYAD) made a new high on October 8 and October 9 but rolled over in the ensuing few days. Still, the line remains well inside its uptrend; and more importantly, well within reach of another new high which would once again signal further upside potential for the market.

The S&P 500 (SPX) and the Nasdaq 100 (NDX) indexes are also within reach but remain below their recent highs. Of the two, NDX looks to be the weaker reflecting the ongoing selling in high-priced technology stocks such as Apple (AAPL) and the volatility in the heavily weighted Amazon (AMZN).

Still, even with the most heavily weighted index stocks running into some selling, the Accumulation Distribution (ADI) and On-Balance Volume (OBV) for both indices remain in up trends. 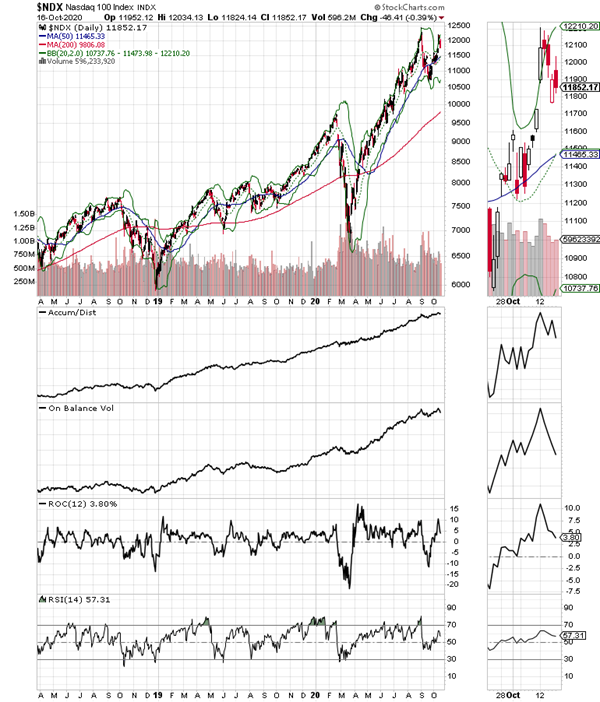 It’s been a while since I’ve looked at energy stocks and healthcare stocks such as Medtronic. Yet, as the market rotates, I’m starting to see the potential for money to look for a new home away from recent leadership sectors such as technology. Certainly, as I noted above, the Nasdaq 100 is struggling, even as the most beaten of all market sectors, energy has yet to show any convincing signs of life.

Nevertheless, as long as the Fed continues to pump money into the bond market, the odds will continue to favor higher stock prices, barring something very extreme happening. Moreover, at some point, undervalued stocks will get their day, especially if the economy continues to improve.

The bottom line is that by keeping our eyes open and by reviewing all the potential possibilities over time, we will likely continue to find winning stocks.

I own shares of MDT as of this writing. In my medical practice I have used and often recommend Medtronic products. I have no insider knowledge of the company.

With this setup overall, I have one setup and I traded it three ways. That’s why it’s ca...