Last week the Dow was sitting right on the magnet line that has navigated the action (on either side) since June. I told you it needed to break recent support from October 15 to get the bears going, explains Jeff Greenblatt of Lucas Wave International.

Price action fell away from the magnet line, but held the test of support, for now. The bounce has mostly been given back and the whole pattern looks weak. The Kairos right now at the latest pivot of 28575.03 is a 61% retracement to a pivot that peaked at 661.36 points up.  As it turned out, the pivot in question stalled and reversed right at the low of the wide range bar that created the secondary high. That means the price action is confirming a secondary high. The problem for bears is they couldn’t break it down when they had the chance. 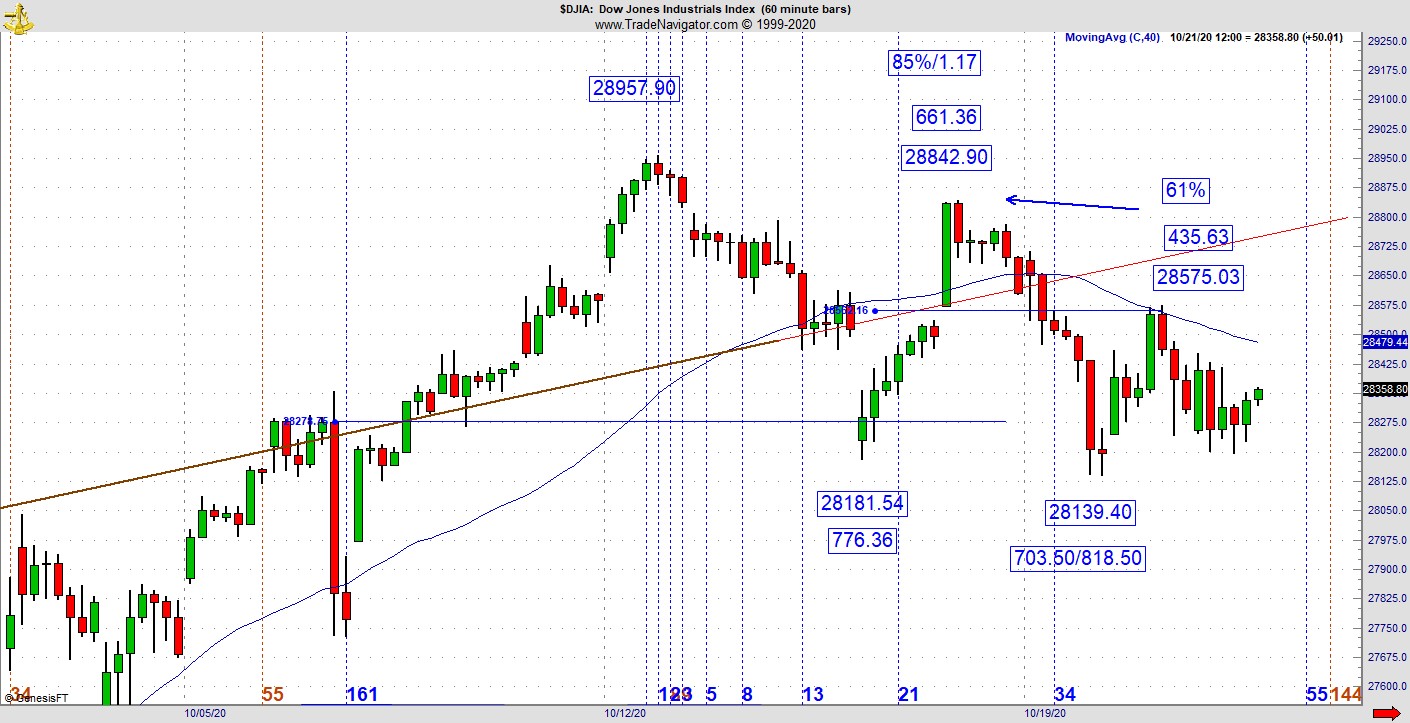 At this point, the market is holding by a thread. Tech indices don’t look any better. Regarding the world, the market is focused on the election but now must deal with other scandals and issues. The Biden scandal should be monumental and may end up influencing the election in ways that are unintended. On top of that is the long-awaited antitrust suit against Google. The big tech companies all operate as monopolies no matter what you’ve heard. They’ve stifled competition and worse, they act as a cartel. When they decide to censor someone, I’m sure you’ve noticed it’s done at the same time.

The Communication Decency Act was enacted in 1996 and Section 230 of that code protects a website host from liability for “any action voluntarily taken in good faith to restrict access to or availability of material the provider or host considers to be obscene, lewd, excessively violent, harassing, or otherwise objectionable. That works if the website or host in question does not act as a publisher. Once you act as a publisher, everything changes.

So, when Twitter (TWTR) or Facebook (FB) chooses what can or can’t be posted, they’ve become publishers but still are protected by Section 230 as the law is obsolete. If Congress were to lift Section 230, Facebook and others could be held liable for censorship that harms an individual or an institution. Let’s cut to the chase. If Section 230 protection were lifted, you and I would be able to sue if we were censored.

The latest outrage is an outright censor of the New York Post by Twitter concerning the Biden scandal. What these companies have done is stifled legitimate journalistic reporting and this time it goes beyond an individual’s right to free speech. This time they’ve messed with freedom of the press. A legitimate capitalistic free society will not survive without a free press. It’s one thing if certain networks want to engage fake news. It’s quite another to stop one of the biggest newspapers from the biggest city in the country from carrying out its mission.

Many people are wondering what took the DOJ so long as the censorship of the NY Post amounts to election meddling, the same thing the Russians were accused of four years ago.  Perhaps a lot of people woke up as a result of this event. Google is going to be the first one to face the music. The antitrust investigation has been going on for a year and in the very least they are the default search engine in roughly 90% of computers and smart phones per Fox News.

Google was called out and the market did not crash the way it did when a judge in a different era called out Microsoft as a monopoly. As we know, that was the popping of the Internet bubble. As tech did not crater on this news, it might mean the market does not believe the DOJ has the spine to follow through. Unfortunately, antitrust action here is unlikely to stop election meddling and fraud that is highly likely to throw the election into chaos. Here’s my bottom line. You know how crazy the intraday swings are for the average FOMC meeting. I suspect the action around the election to be like that, only on steroids. Everyone has heard the market will rally if Trump wins, crash if Biden wins. There is a camp that believes the market will rally if Biden wins.

I’m looking at this season from a different perspective. No matter who wins the higher probability is the election won’t be decided on time. Financial markets don’t like uncertainty, so as we get closer to the zero day, expect wild action and perhaps an initial drop as the election is not decided.

Finally, the market is focused on stimulus. If a deal does get done, we should get a noise spike to the upside but the reason the market is not lower despite confirming a secondary high is the hope a deal will be reached. But they could already be buying the rumor so they would sell the news. On the other hand, if the deal falls through, there should be a knife type drop. The secondary pivot you see already has the pattern setup for more bearish activity.

Briefly, here is this week’s Kairos intraday trade of the week. Here on the E-Micro we had a situation where price and time squared out as it was in sync with the candle formation. From the high you can see the candle reversal formation is a bearish engulfing bar. From the point the big red bar going down took out that last green bar going up, the sellers got the upper hand which is the higher horizontal line. 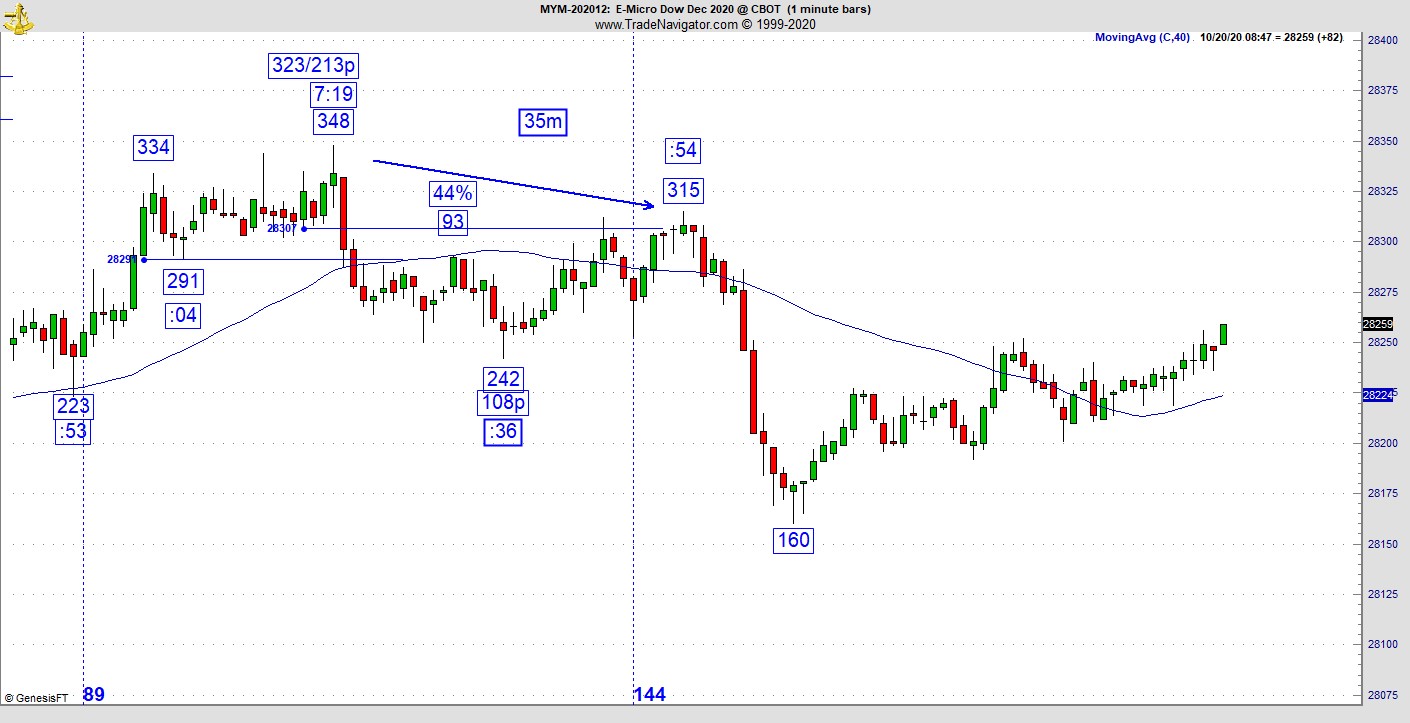 The point here is the price action comes back up to test that line almost perfectly. It stalls and where price and time comes in, the low at :36 minutes after the hour lines up with the fact the high to high condition is 35 minutes, which you can see in bold. So, price and time square out in the exact right place where there is a retest of where sellers got the upper hand over buyers as part of a topping process. This is what led to the 155-point drop in 11 minutes. This is a tendency that repeats over and over.

Why worry about picking tops and bottoms? It takes a good amount of discipline to wait out an initial move off a top/bottom but many times the retest will hit the exact point or very close to line where one side got the upper hand over the other on a trend change. Finally, look back at the Dow chart. The latest leg down commenced on the exact retest of the breakdown to the secondary high. See how the bounce failed right at the base of the wide green candle on the prior high? That’s important resistance right now.