Stocks certainly have been in a sloppy intraday trading pattern of late, a dynamic which can be unnerving to anyone who trades on a regular basis. Yet, the market, despite the intraday whipsaws has not crashed, which is a bullish sign. In fact, despite the intraday volatility the markets are essentially moving very little on a weekly basis. Of course, that’s primarily because the Federal Reserve will continue to pour money into the banking system to the tune of nearly $130 billion per month.

Indeed, just as I’ve been expecting, as the election gets closer so have the related stories regarding the candidates escalated in content and scope, but surprisingly so have the polls tightened with the presidential race now being described as a tossup by many. Indeed, it seems the race could go either way, so all I can say is that on or about November 3, we may have a bit more clarity on the election.

Moreover, even if we don’t know who wins for a period of time, we’ll at least have a much better idea as to what the next few months of trading will be like as the NYSE advance decline line and our reliable money flow indicators will likely clear up and finally give us a trend that lasts more than a day or two as measured by the market indexes. Until then, all we can do is trade one stock at a time cautiously and see what happens.

Over the last few weeks I’ve noted, based on personal observations while traveling, as well as on the study of price charts, that it seems as if the US economic recovery is starting to gather steam, which is why the improving action in the shares of casual restaurant operators Shake Shack (SHAK) and Starbucks (SBUX) caught my eye recently. 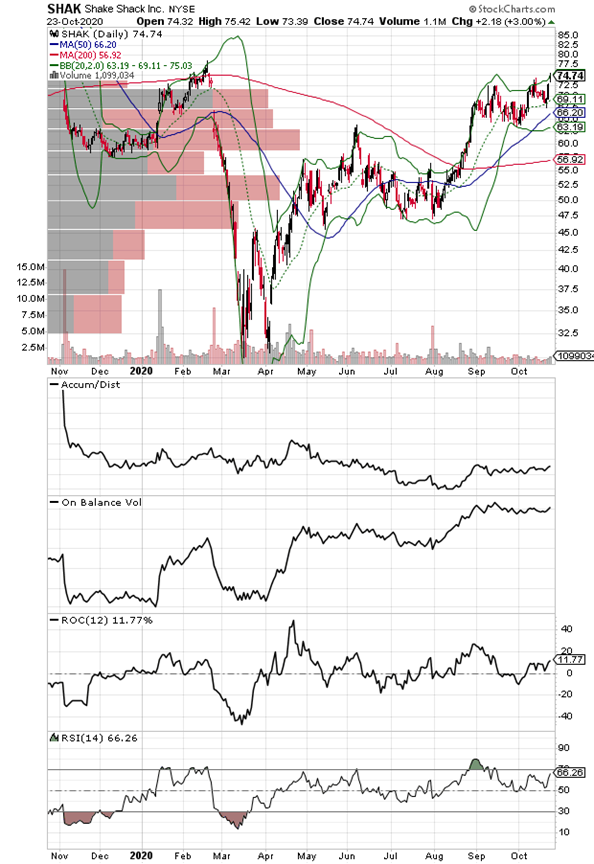 Both of these restaurant stocks have done well in the past because of their well-crafted niches and their appeal to consumers looking for something slightly different.

Shake Shack is a well-known upscale hamburger joint catering to the more health conscious, or at least those looking for fresher ingredients in their junk food; if not just those willing to spend more for a burger as they sit in a more bistro-like setting. The bottom line is that SHAK’s advertised use of upscale ingredients and their alluring dining rooms allow them to charge premium prices, which have allowed the chain to deliver nifty profits while steadily expanding into prime locations. 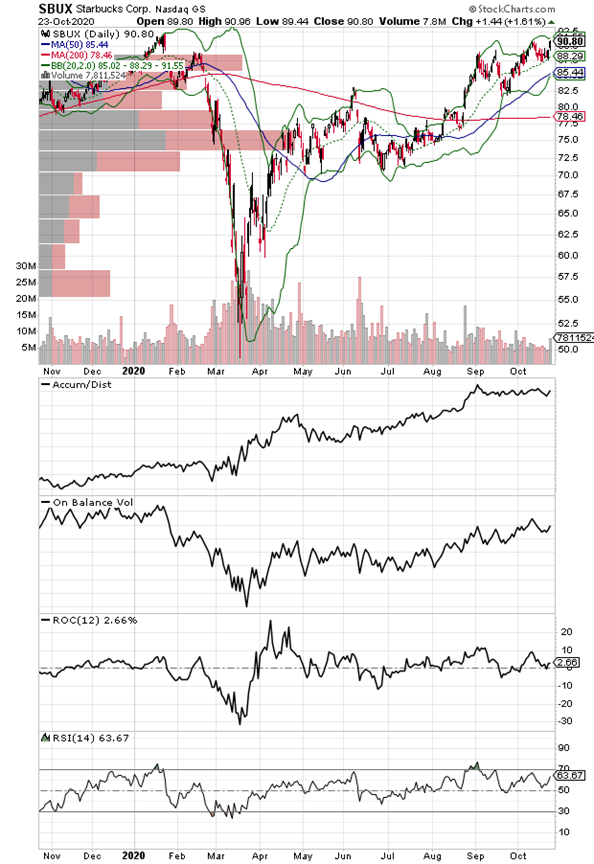 Starbucks is a similar story on the coffee side, although of the two, it is the one company with the larger global footprint and the more reliable management team and earnings stream. Both stocks took huge hits during the early stages of the Covid-19 crisis but have slowly recovered and are now on the verge of what could be significant upside breakouts.

The stories for the stock price recovery are similar and are both based on the expectations of an economic and more important improvement in the job market as the world adapts to Covid-19. Both stocks tend to rally when there is positive news on the economy and the potential for a stimulus deal out of Washington, as well as recent brokerage house upgrades has helped. Moreover, in the real world, both companies are seeing increasing traffic returning to locations for takeout and drive through orders, which could be the basis for better than expected earnings.

Technically speaking, both stocks are now at key chart points where the Volume by Price (VWP) indicator is showing that price resistance is evaporating. What that means is that if shares increase above nearby resistance levels, $90 for SBUX and $75 for SHAK, the upside for both stocks could be in the range of 5-10% in the short term.

I have added a new stock this week, which is quietly moving higher as it benefits from the changing trends in society due to Covid-19.

The Bollinger Bands, a highly precise measure of market volatility for the NYSE Advance Decline line (NYAD), the S&P 500 (SPX), and the Nasdaq 100 (NDX) indices are closing in around their 20-day moving averages (shrinking). This is highly significant because shrinking Bollinger Bands document decreasing volatility, which in turn is an excellent predictor of a large move in the stock market in the not too distant future. 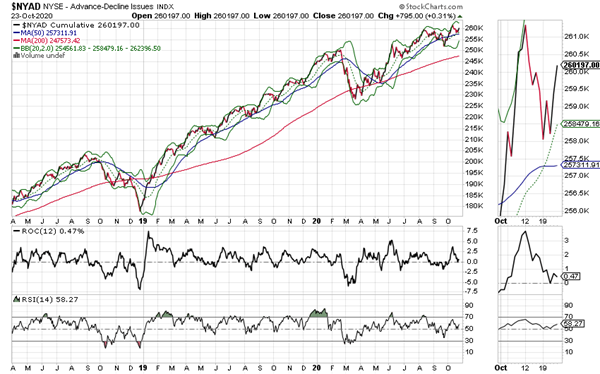 Even more encouraging, by the close of last week’s trading, the Accumulation Distribution (ADI) and On-Balance Volume (OBV) indicators turned up, more so on SPX than NDX, which means that money is once again flowing into stocks. Moreover despite the daily volatility in the market the NYSE Advance Decline line has remained above both its 50-day moving average and the 50 area on the RSI indicator, indicating that the uptrend remains intact despite the intraday volatility of the current market. 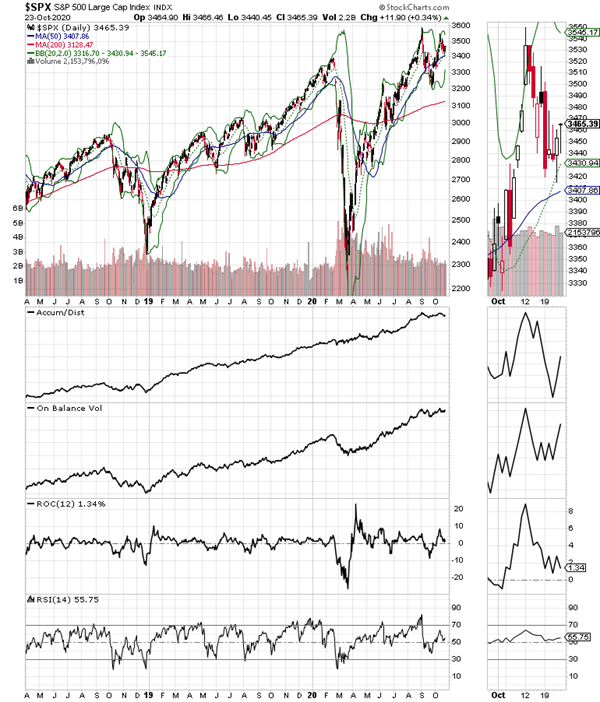 And while it’s easy to get caught up in the day-to-day grind of the market, it’s also important to focus on the broader picture. For example, as the market gyrates on an intraday basis, the major indexes, the Standard and Poor’s 500 and the Nasdaq 100 also remain above key support levels—their 20- and 50-day moving averages, as dip buyers came in on most major drops in the market during this week. 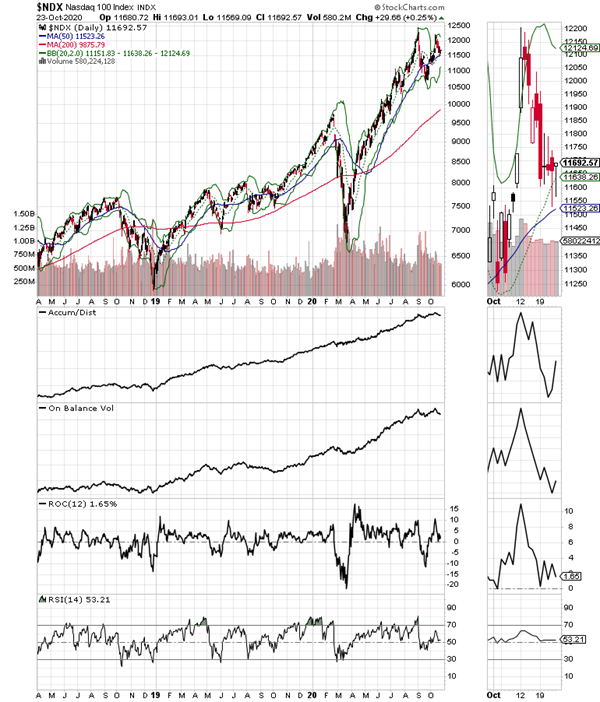 The bottom line is that investors should now be focusing on the direction of the next move, not of the recent past.

Prepare for Big Move in Stocks

As I noted above, the odds of a big move in stocks is rising. Certainly, the technical data suggests the move will be to the upside. But of course, there are no guarantees so investors should prepare for both an up or down move as the election cycle winds down. A third option, at least in the short term is a continuation of the current choppy trading market where choppy trading continues.

The one constant for the bulls, however, is the fact that despite this market’s daily intraday volatility, the uptrend has remained in place. That said, much of anyone’s trading success these days is based on what stocks they pick and how much room the shares are given to gyrate as the news rocks the markets. In other words, those investors who are not willing to take some chances should not be investing or at least being very choosy in where they put their money and how much they wish to risk on any given position.

Certainly, options offer the opportunity to trade with less risk in the sense of how much money one can lose on any one trade. Yet, the downside is that options, due to their built-in leverage, can often suffer from outsized moves from which they may not recover before expiration.

The bottom line is that in this market, it makes sense to be prudent, to consider multiple trading outcomes and to be patient while at the same time being prepared for what is likely to be a significant market move as the election nears.

I own shares in SBUX and SHAK as of this writing.

For investors looking to “go green,” the iShares Global Clean Energy ETF (ICLN) may be a...

In these days of historically low interest rates, how does a stock that yields over 7% sound to you?...

Sam Stovall: The Outlook for Seasonal Optimism
18 hours ago

November has lived up to its reputation of kicking off the two-month stretch of seasonal optimism. I...