You Are Never Defeated Until You Give Up

In case you noticed, this column did not run last week. Last Wednesday, which was the “day after,” my 13-year-old lab Sydney passed away. Years ago, people would think one is crazy by getting overly emotional about the death of the family dog, explains Jeff Greenblatt of Lucas Wave International.

It’s just an animal, right? Well, in the past few years, especially in this era of isolation people are coming to realize pets are a real part of the family.

When one of our favorite companions must make that long car ride to the vet, we’ve come to realize how important they are to our well-being. The fact that I, like many traders, work out of the home, will create a tremendous void. It’s tough as my wife works out of the home.

I was down but not out. If you want to succeed in life, you will fall and fail. It’s not how many times you fall, what counts is that you get back up one extra time. You’ve heard from every motivational speaker you’ve ever listened to. It’s not just a cliché.

So how do we relate my situation to a financial audience that trades and invests? Trading is one of the most difficult businesses to master. You are going to face adversity, much of it self-inflicted. Many who have succeeded in this business have blown one or more bankrolls learning the ropes. If you are serious about sustaining, you’ll take inventory of what went wrong and work at fixing it. You’ll get serious about being honest with yourself. It’s been said the successful veteran trader has invested at least $20,000 on their education, which does not include flushing money down the black hole, which is the market. You’ve also heard you’ll learn more about yourself in this business than just about anything you’ll ever do. That means it will either take your money or reward you very well if you can get into “flow” and overcome all technical, strategic, and psychological mistakes. The market doesn’t care whether you do well or not. It’s up to you.

I remember Kim Githler’s opening remarks at the 2018 Trader’s Expo Las Vegas. At the time I estimated the crowd in the big ballroom could’ve been as high as 2,000 but I could be wrong. It was the 4th quarter selloff, and the market was down a ton that day. She asked two questions. First, how many traders had five years of experience or less? I estimated 75% of the hands went up. Then she asked how many had participated in the big down wave that was developing. There were probably less than 20 people who were able to say yes.

What does that mean? There is a large turnover in this business. Ultimately, you better be able to deal with all kinds of adversity. Your commitment must be rock solid.

The market doesn’t care if you exist or not.

What happened to me? I always pray for healing, breakthrough, and prosperity. God answers those prayers but in His time. Sydney had not been well for several months. It didn’t seem God answered that prayer.

When I started to get back on my feet I did not come to God in anger or blame. I asked Him to start the process on helping us find our next “forever companion” and greater prosperity for my family and this country. We all need it. He already answered me. No, we don’t have a new lab yet, it’s too soon. But those of you who follow my Gann work know I do a very respectful job when it comes to the price and time squaring of patterns in many time frames. I’ve stumbled into many of my revelations simply because I show up every day, follow and trade a one-minute chart. We’ve discussed neuroplasticity, in order to learn any new strategy, you must model it. Tony Robbins built an entire industry on modelling what works. The path to success in this business is following the action and learning the tendencies of the market. Any professional athlete will tell you the same thing. Those of you who are old enough may remember along with Paul Brown, Sid Gilman revolutionized the NFL by being the first coaches to incorporate film to understand the tendency of the opposition. You must learn the tendencies of the market if you ever hope to get into a flow state with it.

Over the weekend, I achieved an incredible breakthough as God answered my prayer anyway. Those of you familiar with my work know I’ve developed a unique Gann calendar where every day of the year has a specific vibration, which does line up with the action on financial charts. In this space I’ve given you fully accurate examples on just my Dow and US Dollar charts.

I’ve been on the periphery of a vibrational clock for one 24-hour cycle, which will work the same way as the as the daily calendar. I got bits and pieces of it over time, but not the revelation I was looking for. Until now. When I woke up on Sunday, I had the revelation I knew that I knew but still had to see it work on my one-minute chart. Certain things would have to line up on a chart to get similar vibrations like I do on a daily chart.

It did and not only is this a breakthrough for understanding how intraday charts work, but I anticipate another breakthrough in my trading. In three days, that’s already true. The one-minute E-Mini/E-Micro has always been my laboratory. When I uncover a new tendency there, I’ve found that it will work on any chart.

What does this mean? I’ve developed an intraday vibrational clock based on the same principles as the yearly clock you are familiar with. Over time, I’ll start sharing examples here.

On the surface, this story appears to be about me but it’s not. I hope you can be inspired to take this testimony and apply it to your own trials in life. Yes, you are going to hurt. But you do have the power to turn things around, it’s always darkest before the dawn. There is always a silver lining if you will only persist. What I’ve seen from so many aspiring intermediate level traders is they give up when they are so close to a serious breakthrough. No matter what you may be going through, don’t let that be you.

That’s my message. Most of the time, we are not dealing with serious life issues. You might get blown out of a few trades or even lose the bankroll. Are you willing to take serious inventory of yourself and see how you can overcome your mistakes? Bad things happen to everyone through no fault of our own. However, we do have the power to decide how we react.

Many of us realize man’s best friend give us unconditional love. But do you know they know when we are sad and want to comfort us? If you’ve had a stressful life, realize your forever companion likely “absorbed” your trauma. Our pets are like little angels who become lightning rods that absorb our stress. What kind of toll does it take on them?

I’ve always joked that I spend more time with Sydney then my wife. That’s just because she doesn’t work out of the home. As it turns out, I got one of my biggest strategic breakthroughs at a time Sydney struggled with me to gain this achievement but is not here to see it. She was the best but there are millions of dogs that need good homes and I intend to adopt a new one. On the path to breakthrough, there is usually tremendous frustration.

So, what about these markets? Let’s look at the election. Reality dictates the law decides elections, not the media. Several states including Michigan and Pennsylvania are now subject to recount and possibly audit. This election will not be decided at least until the electors vote and certify, which is several weeks away. Think about it, in 2000 the election wasn’t decided until December and that just involved hanging chads. Here we have an overwhelming smorgasbord of recounts, audits, and lawsuits in multiple states. On Monday night alone, CNN took Arizona off the board for Biden. He currently has 279. RealClearPolitics.com took Arizona and Pennsylvania off the board as well.

As traders we must master numbers, patterns, and psychology. In the case of this election, I saw an interview with Robert Bonavito who is an expert forensic CPA. In other words, he’s a financial sleuth who is using Benford’s Law to call out anomalies in the numbers in several states. He’s the type of expert that investigates financial crimes. At this moment, they are not adding up.

I’m not here to tell you who I think is going to win because this is a historic situation with serious geopolitical implications. My message to you is Biden didn’t win yet and this battle is just beginning. Good traders don’t follow the crowd, which may be right for a season but in the end usually wrong. 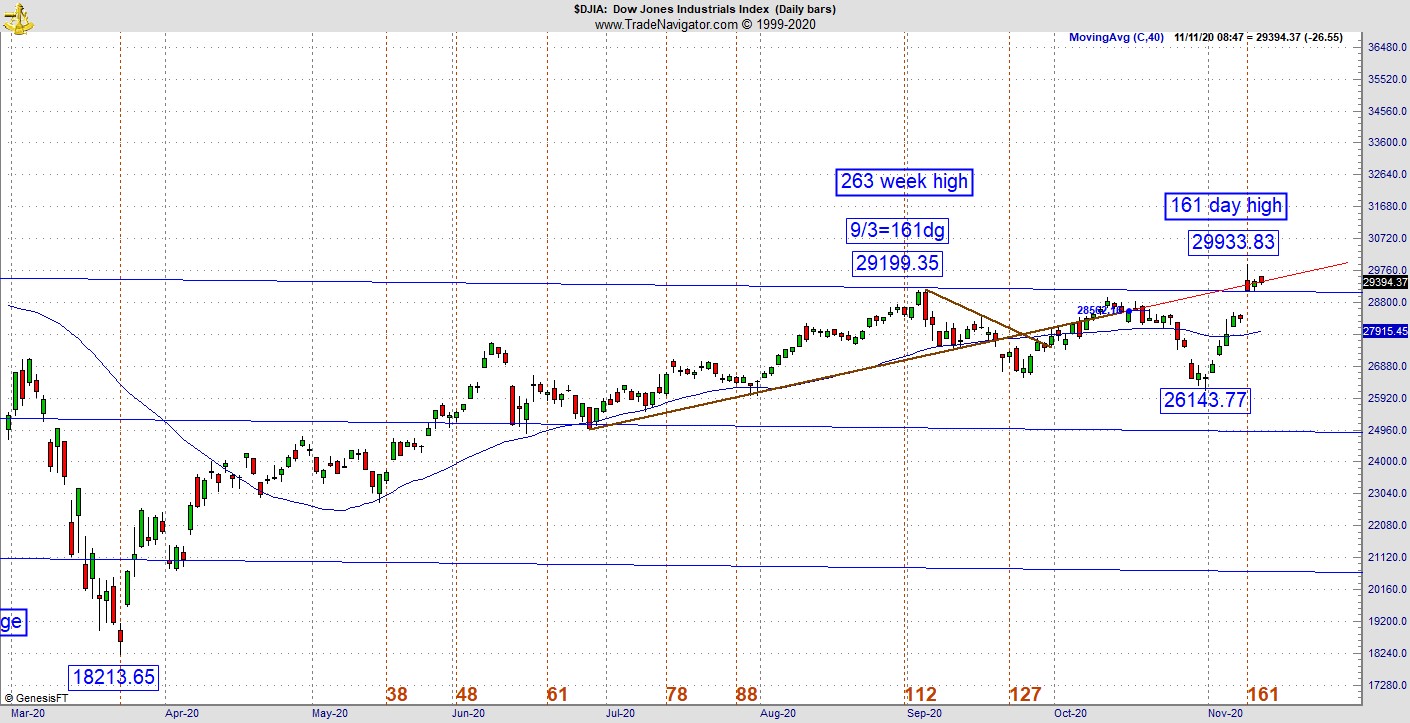 I do have an interesting cycle point for the Dow. As of now we are sitting near new all-time highs while the economy is flat on its back. Here’s the daily situation. The recent correction began on September 3, which just so happened to be a Gann calendar golden spiral 161dg day and as of Wednesday morning hugging a magnet line going back to June. Additionally, it was the 263rd week since the August 2015 low. That was our Fed-induced September and October correction for the year. We should be coming to a Santa rally soon. This year it could be slim. Right now, since the March low, we are in the midst of the 161-day cycle window. Could there be a reaction? We are in an era where on any given anything can happen. That’s it, I lost Sydney, got a breakthrough I’ve struggled to achieve for years, and the world just got a lot more confusing. Thanks for hanging with me.