I expect 2021 to be a modestly profitable year due to competing bullish and bearish forces. On the bullish side are the sequalae of the Federal Reserve’s and federal government’s massive stimulus spending that has left the public flush with cash, explains Marvin Appel of Signalert Asset Management.

Interest rates, while rising now, remain well below where they were a year ago and still remain a bullish factor for stocks. Bearish factors include the delayed vaccine rollout and the emergence of more contagious strains. Valuations are also a concern.

My own assessment is that the US will not achieve herd immunity against the coronavirus until the fourth quarter of 2021. Moreover, even though President-Elect Biden comes across as a stabilizing force compared to President Trump, his administration is likely to be less friendly to business than Trump’s was, particularly concerning the burdens of government regulations.

The chart below from the CDC shows that the total number of daily confirmed cases in the US continues to rise. 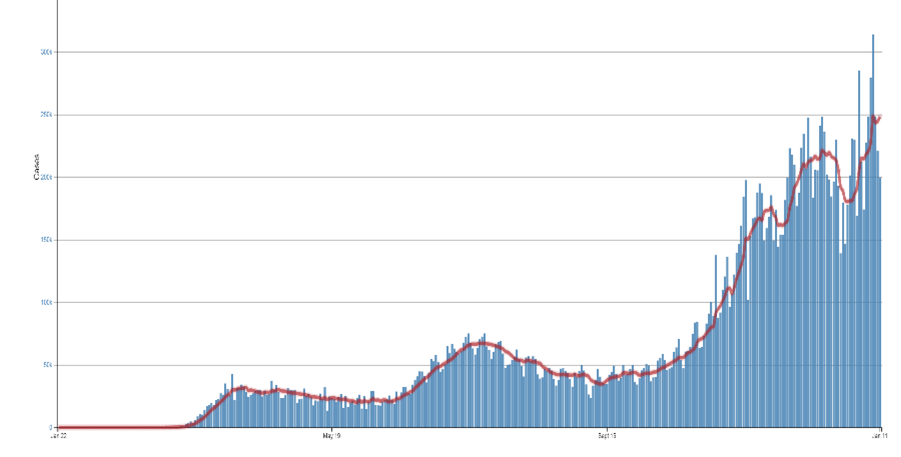 This chart below shows that for the past seven months, Americans have been gradually reducing their visits for shopping and recreation. 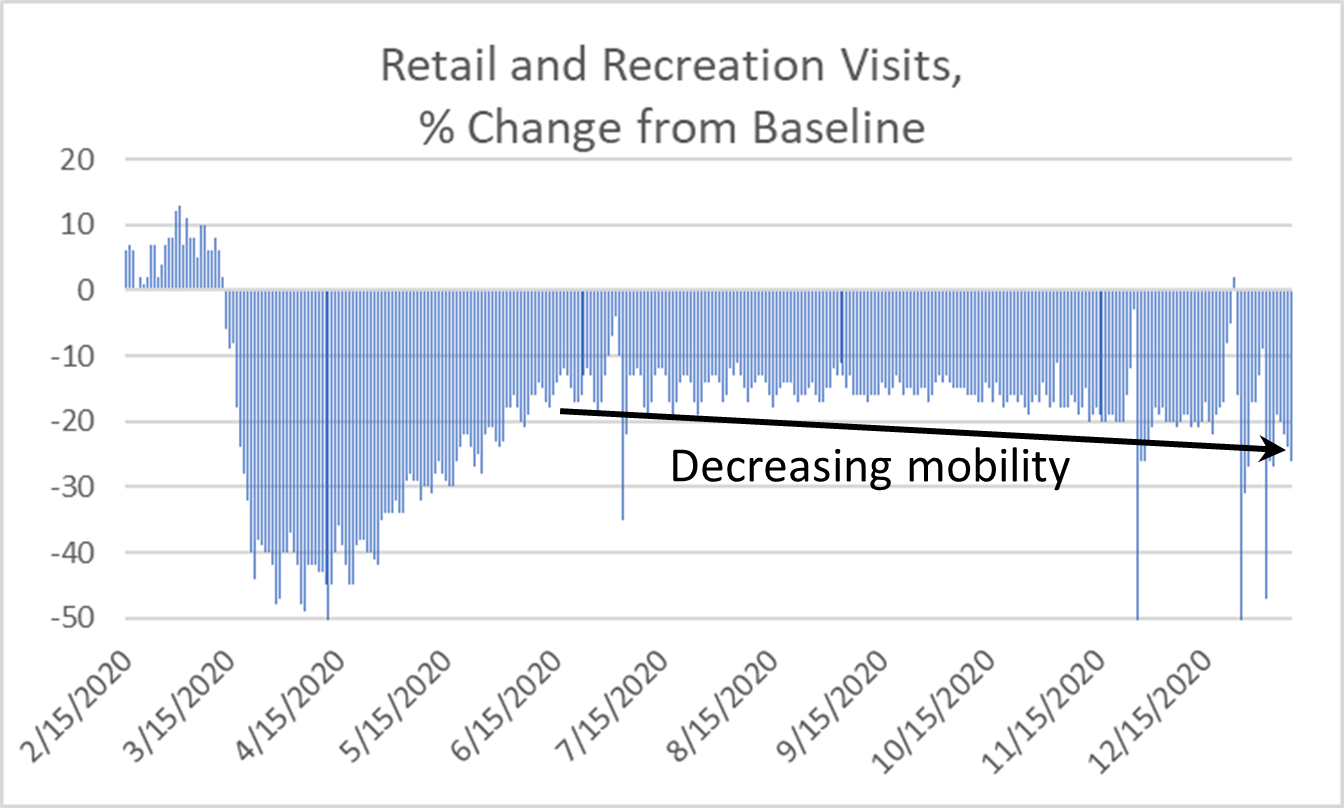 As a result, although consumer spending has recovered significantly from April-October, it remains below where it was at the start of 2020. (Consumer spending actually fell in November.) Until people are safe to congregate in public, the economy will not recover no matter how much money the government spends. Once people are safe, however, then the economy can surge.

We are fortunate that two vaccines (from Pfizer and Moderna) were rolled out in record time and turned out to be as effective as anyone could have dared to hope. However, since the announcement of those vaccines in November we have seen important setbacks. First, just one third of the doses distributed have actually been administered. Second, two new mutations of the coronavirus are more contagious than the original strains. As a result, whereas initially it appeared that the US would achieve herd immunity if 70% of the population were vaccinated, now the required proportion may be as high as 85%.

President-elect Biden set an aspirational goal of vaccinating 100 million Americans in his first 100 days in office, which is twice as fast as the US is doing now. Since two doses of vaccines are required, inoculating 250 million Americans would take 500 days at Biden’s target rate, almost a year and a half. The implication is that achieving herd immunity by Labor Day will require inoculating Americans at four times the current rate. That may be possible, but we have a long way to go.

In the wake of the 2007-2009 financial crisis the Federal Reserve enacted unprecedented measures to revive the economy and banking system. But that was small potatoes compared to what they did in 2020.

The result of all this money printing and distribution is two-fold. First, there is a lot of liquidity that is available to chase financial assets. Second, Americans have large stores of cash that will be available to spend once it becomes safe to do so. The personal savings rate jumped to 33.7% in April, 2020. It has since fallen to 12.9% in November, but that is still the highest since the early 1980s. The potential surge in consumer spending will fuel an economic recovery, but probably later in 2021 than appeared likely back in November. 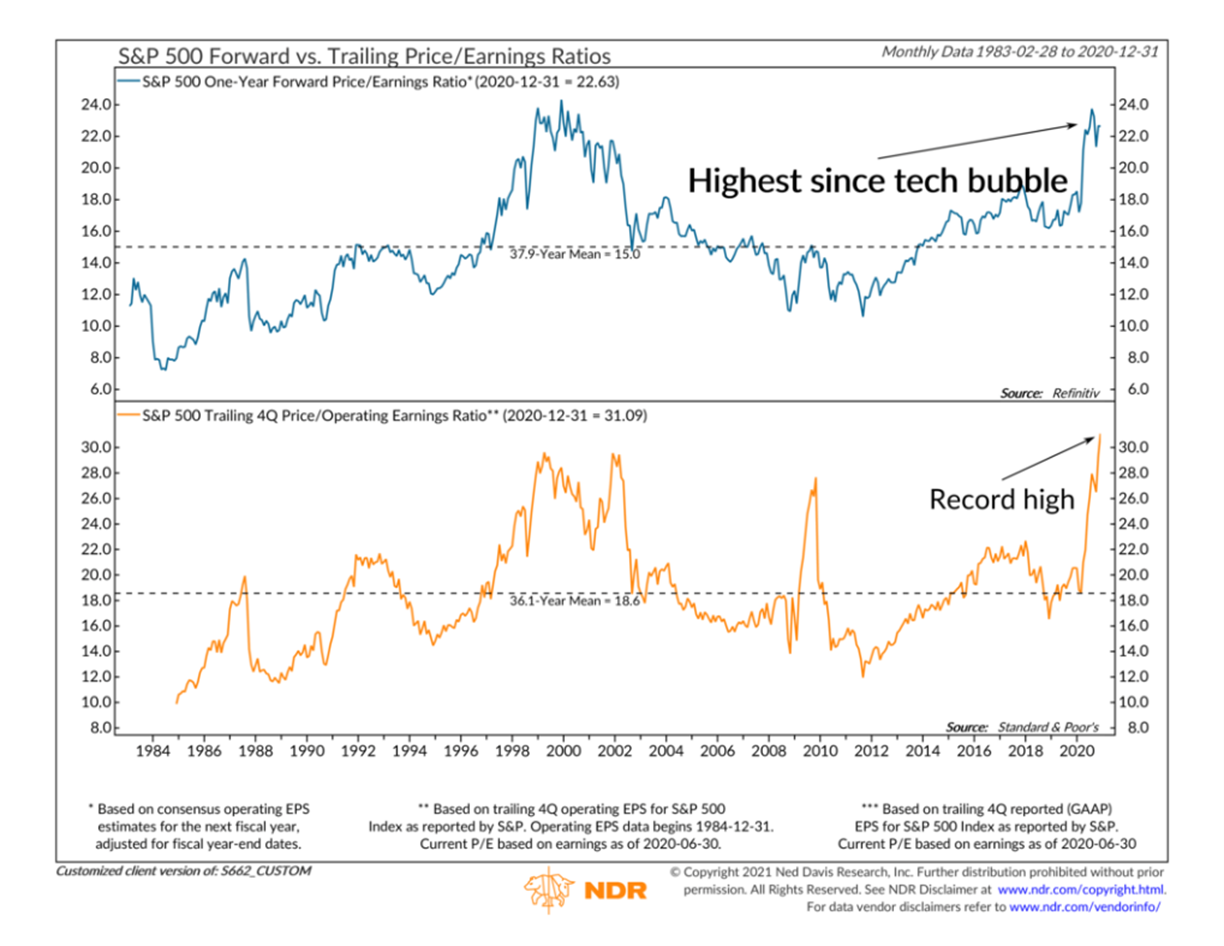 Corporate profits are not expected to return to 2019 levels until the second quarter of 2021. The chart above shows that whether based on trailing or projected earnings, stocks are at or near record-high valuations. That implies below-average returns for stocks going forward. 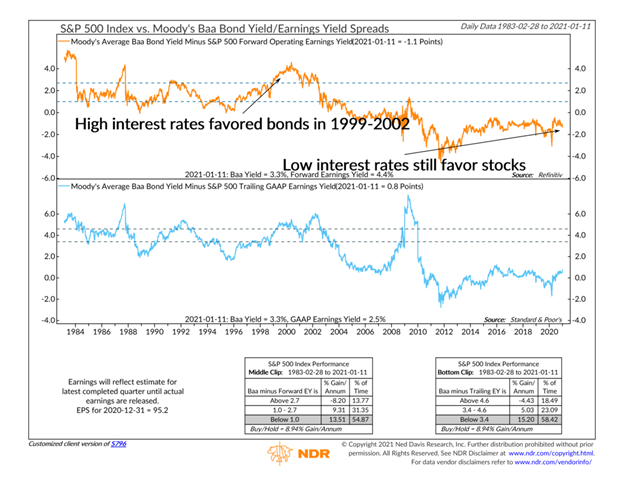 The good news is that even though stocks are expensive by historical standards, bonds are even more so. That means that low interest rates should serve to prop up the stock market if historical patterns repeat themselves. For example, although the price/earnings ratio of the S&P 500 SPDR (SPY) is about the same as at the height of the tech bubble, back then the Fed was tightening. The 10-year Treasury note yield and Fed Funds rate both exceeded 6% for a time. How the interest rate climate is supportive of stocks, as shown in the chart above. When the earnings yield from stocks has exceeded corporate bond yields (as is now the case), stocks have had positive returns historically.

Politics—Better than Historical Precedent Would Lead One to Expect

Historically, stocks have done best with a Democrat in the White House but with Republicans in control of at least one house of Congress. All-Democrat federal leadership, which is what the US will have starting in Jan. 20, has been below-average for stocks. One reason is regulation. Democrat presidents have been more heavy-handed than Republicans. As a proxy for regulatory burdens, the chart below shows the number of pages added to the federal register each year since 1989. (More pages represent more regulations.) Trump (and Reagan, not shown) actually reduced the pace of regulations whereas Clinton and Obama increased them significantly. 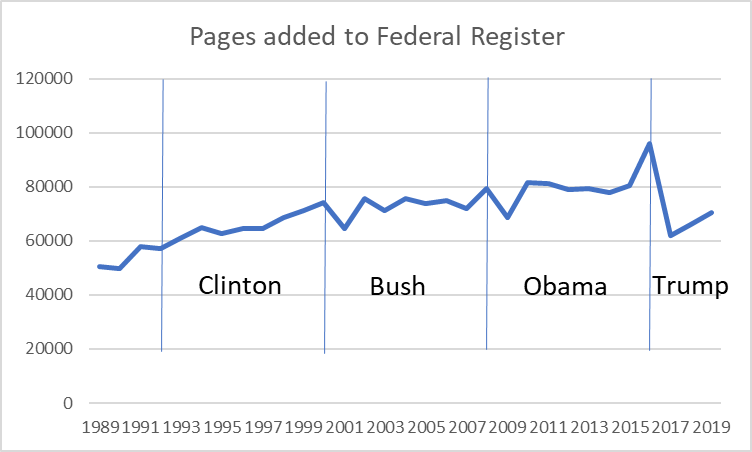 However, my expectation is that in 2021 regulatory burdens will be of secondary importance; it will be more important for public health and for investment performance to have a federal government that effectively deals with the coronavirus pandemic. Based on the public pronouncements we have heard from both parties; I expect that a Biden administration will marshal a more consistent effort against the coronavirus than we saw in 2020.

The bad news is that stocks are already expensive, reflecting optimistic expectations while we begin to experience setbacks in the battle to achieve herd immunity against the coronavirus. The good news is that the Federal Reserve and Treasury are highly supportive of the economy and of stocks. Even though economic recovery may take several months longer than appeared likely in November, the US is still likely headed in the right direction. Based on the balance of bullish and bearish factors, I expect the S&P 500 Index to be profitable but with a 2021 gain of approximately 5% with above-average volatility.

I continue to favor the S&P 500 SPDR as a core equity holding because this diversified index should partially buffer you from the swings in and out of technology stocks. Our momentum model currently favors emerging markets over the S&P 500, so aggressive investors should consider maintaining exposure to emerging markets for as long as that remains the case. Large-cap value (IVE) lagged large-cap growth (IVW) by a record margin of 32% in 2020. That suggests that if you are optimistic that the economy will recover in 2021, you can express that conviction by overweighting value in the expectation of a reversion to a more-normal relationship between the two investment styles.