At first, I didn’t understand or even care about the GameStop (GME) scandal. In my little E-mini/E-micro world, it didn’t affect me much at all, explains Jeff Greenblatt of Lucas Wave International.

When the news didn’t go away after a couple of days, I concluded I had to figure out what was going on. There’s a lot of conflicting information but a few themes are clear. Hedge funds shorted GameStop and others. Citadel Securities is the major player on the hedge fund side. Robinhood is a trading app that does not charge commissions to traders. As retail traders decided to band together to prevent the short and push through a squeeze, Robinhood and other brokerage firms restricted long trades.

There is a populism element working in this scenario where the elitists don’t want to see the public band together to not only make money but declare war on the hedge funds. What was lost at first is the fact that Citadel Securities (which is one of the biggest sources of Robinhood’s revenue) pays Robinhood a fee for handling its orders. For people who like the idea of not having to pay a brokerage fee, there is no such thing as a free lunch.

Apparently, everyone found out the cost last week. The bottom line is had Robinhood not restricted trade flow, Citadel would’ve been in more serious financial trouble. Realizing where their bread is buttered, Robinhood had to do something. But that speaks truly little to firms like TD Ameritrade, where well known trader Gregory Mannarino stated he was restricted from buying several stocks and he decided to close his account.

First, I do not believe this ‘populist’ move against the hedge funds is organic. We live in an era where most major events are false flags. What is a false flag? No doubt, it’s real event but the true motives are hidden, and blame is placed on a certain group or individual because there is a bigger agenda. We won’t know it until some whistleblower comes out but its highly likely this ‘populist’ action was really instigated by some hidden hand.

Why would they do such a thing? The big banks have an agenda for the ‘Great Reset.’ Part of that agenda is they don’t want to see the little guy make money. According to Forbes, Washington State Governor Jay Inslee now wants to tax capital gains at 9% on investment income greater than $25,000 and $50,000 for couples on the state level.

The public is figuring out Wall Street is a rigged game, but people are not blameless. People didn’t understand how a trading app could be tied to the hedge fund which may have created unintended consequences last week. How to combat the big Wall Street institutions? I’ve been telling whoever was willing to listen for years anyone could compete with these hedge funds who are not nearly as smart as they want you to believe. But getting in the way of massive, short sellers isn’t the way to do it.

Hedge funds short stocks they think should be worthless. Nothing wrong with that. People like Dave Portnoy (Barstool founder) wanting people thrown in jail? Mr. Portnoy (a sports guy) gained notoriety for his stock picks during the past year. I’m sure Mr. Portnoy is a great guy, but we are finally getting to a point where people who have no real expertise in trading are getting the major headlines which should be a flaming red flag. There’s an adage in this business, don’t mistake a runaway bull market for trading skill. It happens every time.

There was an article about a ten-year-old Texas kid who made $3200 on the GameStop short squeeze. When we see people, who know little to nothing about how the stock market really works, we are finally extremely late in this game. Real traders know and respect the degree of difficulty involved in turning a profit.

What the GameStop short squeeze proved is that anyone can put on a winning trade at any time and it has nothing to do with their ability to trade successfully. So, in this case, everyone shares a degree of responsibility. Hedge funds are run by grown men. They should understand the risks. Players like Portnoy need to understand if you end up in a mob, you will get what you get. As it turned out, Portnoy claimed he lost $700,000 in this sequence.

When people who know little about the market become the headline, one must understand its late in the game. As you know I’m watching the 144-month window and the 233-day trading window of this move off the 2020 bottom later this month. You realize the actual anniversary of the bull comes March 6-9 so risk will remain high through that period which is a month from now. 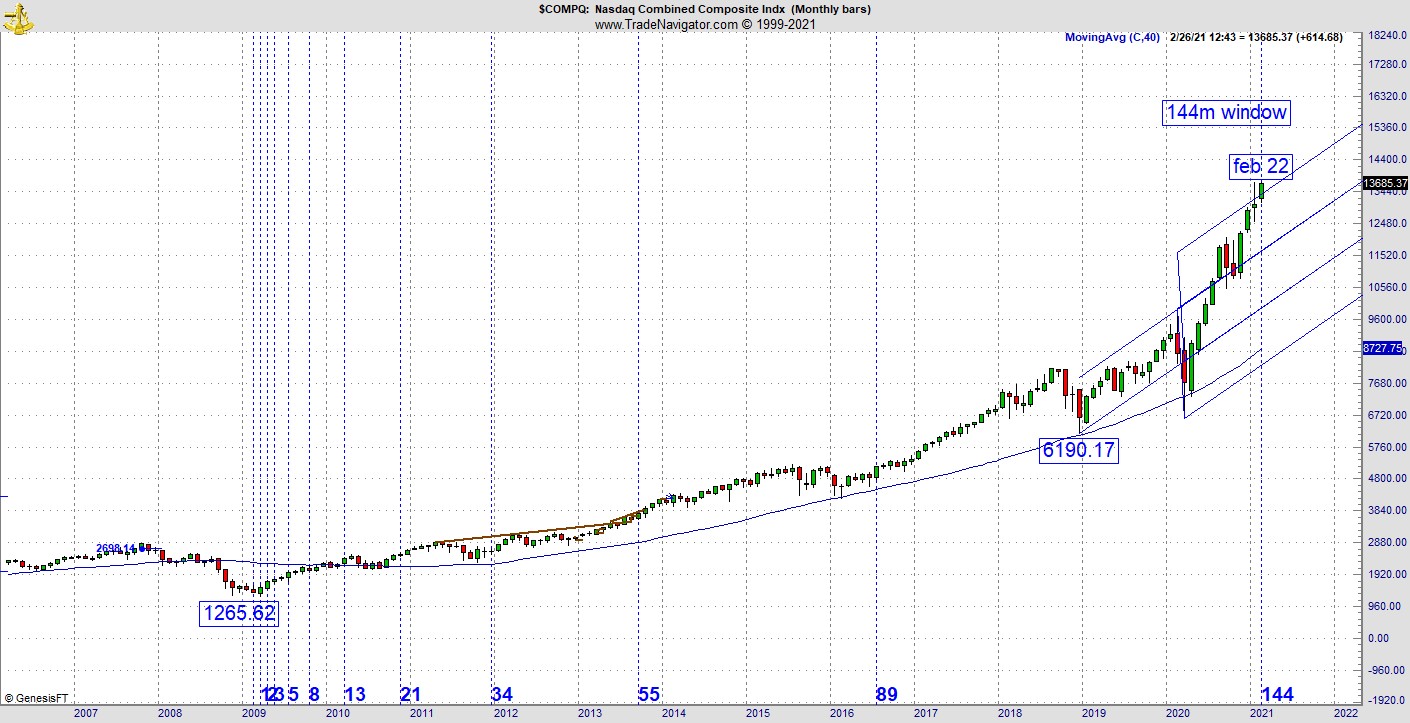 Wall Street is a corrupt, rigged game. It always has been. Most of us involved in financial markets realize this. The problem is at least two-fold. Number one, apps like Robinhood are biased simply because they know who is paying the freight. If a trader gets to trade for free, they must realize there is a reason for it. On the other hand, very few people involved in financial markets truly understand how markets work. The media hype wants the public to believe the institutions know what they are doing.

At least once a decade that is proven wrong in a very big way. Remember the financial crisis of 2008? We were told that derivatives would prevent the market from ever crashing again. Result? Banks who were too big to fail were bailed out. The Fed maintained an incredibly low interest rate environment for a dozen years. The one time they raised rates (2018), the market tanked because the economy couldn’t sustain even the smallest increases which were lower than the long-term average for rates.

What should you do about it? Stay clear of the crowd who is allowed to be right for a season but in the end always gets crushed. Finally, invest in yourself and learn how to trade properly. If you can do that, you will put yourself ahead of 90% of the people who like to call themselves traders. Finally, pay your broker a commission. You get what you pay for.