Before we speak about the Fed's new governor, let's discuss metals. The latest spike in yields is triggering fresh selling in metals, says Adam Button of ForexLive.com.

Interestingly, gold/Ethereum ratio is at new lows and gold/Bitcoin is near its lows. Below are the major declines in gold over the past 13 years. The question now is whether we will see a sharp rebound as we did in June 2012 before a renewed plunge as in Oct 2012-April 2013. 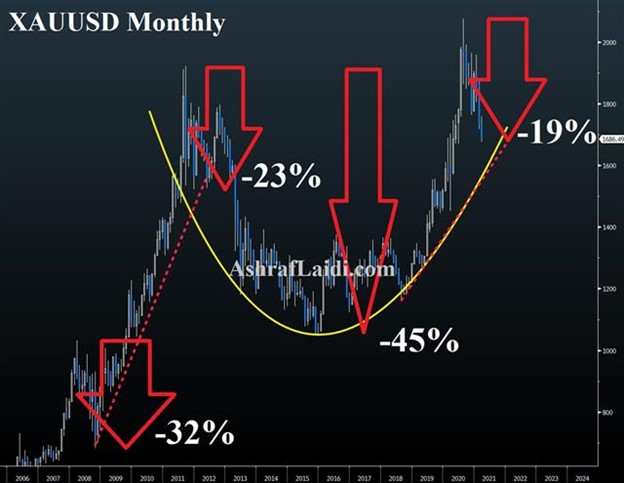 New Fed Governor Chris Waller made his debut appearance on Monday and his comments touched on a looming problem. The Swiss franc led the way on Monday while the euro lagged. US consumer confidence is due up next.

On the surface, the comments from Waller were a non-event. He repeated the standard Fed lines that it will be a long time before it's appropriate to raise rates. He said that rising yields were a sign of economic confidence and he pointed to well-anchored inflation expectations. There were some hints he will be a more-hawkish governor but it's way too early to judge.

What stood out though was that the topic of his first speech was central bank independence. Waller's term runs until 2030 and he'll surely going to be tested on that front.

The long arc of the last 35 years of monetary policy is towards lower rates. That means that by-and-large central banks have been an ally for Treasury Departments.

The next era—and we got a taste of that with Trump—will be a more antagonistic relationship as central bankers slowly raise rates or are at least forced to adjust to contain rising inflation.

For politicians, that's often a disastrous outcome. That push-and-pull has been clear in Turkey in recent years as the government meddles with central banking.

At the moment, the market is enjoying the confluence of easy money fiscal and monetary policies as global disinflationary trends converge, but the crest of all those trends is near.

Tuesday's US economic calendar picks up after a quiet day to start the week. A pair of indications on house prices will be a reminder of the new spending power of consumers.