If you’re uncomfortable with this market you are not alone. It certainly is a head scratching place for sure. Yet, the combination of the ever-present Wall of Worry and easy money from the Fed continue to move stocks higher as every dip is being bought over and over again, states Joe Duarte of In the Money Options.

So, we continue to trade in a familiar place as once again stocks rallied into Friday’s weekly options expiration with new highs on the New York Stock Exchange Advance Decline line (NYAD). Perhaps even more bullish is the fact that several major investment banks are now turning vocally bearish even in the face of new highs and low odds of the Fed raising rates anytime soon. Of course, volatility may again increase as stocks reconsider the possibility that capital gains taxes may rise, or whatever the next story that develops over the next 24-hour cycle.

But truly from a trading standpoint, it’s not so much about whether the tax increases actually materialize but what the bots do in response to the news and how their response affects the trading environment in the short term. That’s because the Fed isn’t going to take its foot off the pedal on QE for the next few months. Moreover, the bots have a short memory so any good news in the moment prompts them to once again buy stocks no matter how bad the news was yesterday.

So, even though this bull market will someday end, plausibly at any moment and potentially with a huge crash, just as we’ve seen time and time again with one- or two-day pullbacks in the market the dip buyers materialize, and stocks move up again. Thus, it’s difficult to turn completely bearish barring a more concise set of signs that the market is actually topping out.

As a result, even though we know this market is well beyond unnatural, current trading should be focused on what’s working. And that means managing each individual position in accordance to its performance compared to what the market is doing. Certainly, it’s also tempting to hedge when things seem dicey, but to do so can be costly as the market turns up once again.

Therefore, the bottom line is that stock selectivity and the use of options as risk management tools is a sensible strategy at the moment, especially via income producing option strategies when applicable while also taking short-term trading opportunities as they present.

The three options expirations (M, W, F) for the SPDR S&P 500 ETF (SPY) last week started on a fairly bullish note but on Thursday, the put buyers ganged up on the 410-413 strike prices on news of potentially higher capital gain taxes. Then by Friday, the dip buyers came in and call options widely outnumbered the bearish put buyers at key SPY strike prices—415 and slightly above—and the bears again had to cover their shorts. Rinse, repeat.

So, here’s how it works: when call buyers force dealers to hedge their call option sales via stock and stock index futures purchases stocks tend to rise, as we saw on Friday. In contrast, on Thursday, put buyers forced dealers to sell puts and then hedge their bets by selling stocks and selling index futures to hedge. The bottom line is that the options market, specifically weekly expirations on SPY continue to exert a credible influence on the overall stock market. And if you want more in depth options analysis you can catch me live and in person at The Money Show in Orlando in June. Register here.

Once in a while in the midst of a storm, we can see a lighthouse.

I rarely write about or trade in financial services companies because their stocks are often dull, and their business models are often high-risk and beholden to the unknown. But because of the strength in the housing market, I’ve broadened my horizons a bit which is why I’m writing about mortgage insurer Essent Group Ltd. (ESNT). And yes, it is a bit out of character, but I’ve got to tell you the price chart looks pretty spiffy and the fact that it’s housed in Bermuda, as they say, struck my fancy. 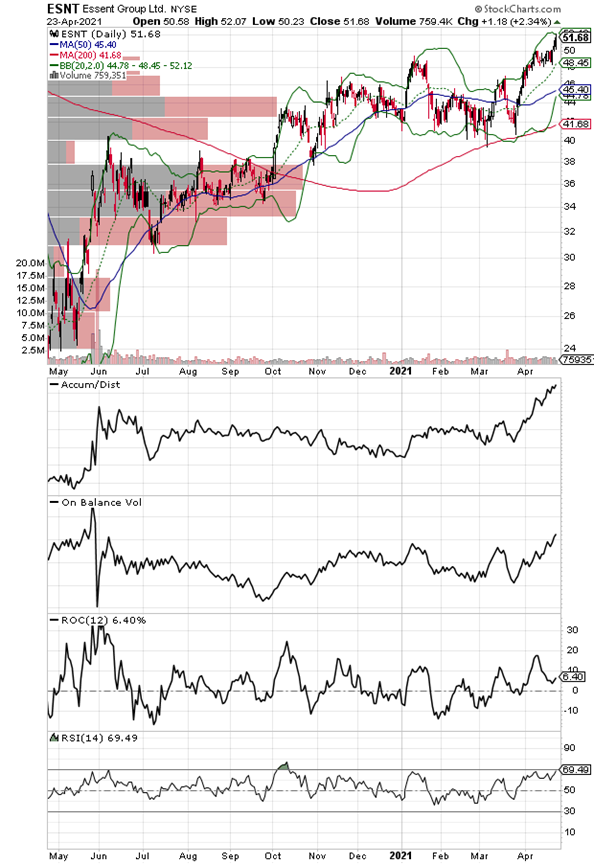 So here is what’s interesting. First, as I noted, ESNT is based in Bermuda, which makes it stand out given the potential for all types of interesting assumptions and James Bond scenarios and providing an offshore vibe. But ESNT is not a bank, it’s a mortgage insurer and it helps if you think about it as a private version of Fannie Mae. In other words, ESNT makes money as a middleman when mortgages are originated and from mortgage insurance purchases.

But here’s where things are different. ESNT is also a tech company. Indeed, it has another profitable sideline, as it also sells its services such as its mortgage technology platform and consulting services, which means that it’s also a software company with the potential for subscription revenues and consulting fees. Moreover, its core business is also doing pretty well with its default rate improving and its book of business expanding after a difficult 2020, while the balance sheet is in good position with $4.8 billion in cash and securities.

In fact, even as its direct mortgage business is doing pretty well, ESNT is also positioning itself as a data vending company for the mortgage industry, which is a business that could hold up better than mortgages if the economy or the housing market slow down as mortgage originators look to sort out the risk of lending to individual customers.

From a charting standpoint, the stock is under aggressive accumulation as both Accumulation Distribution (ADI) and On Balance Volume (OBV) are rising at a good clip. Moreover, its Volume by Price (VBP) activity suggests good support at $45-$48 with little resistance above $50.

Finally, if bond yields don’t mount another climb, with the housing market fundamentals remaining on the side of homebuilders and homeowners looking to sell into a hot market, ESNT is in an excellent position to keep the lights on in its offshore lighthouse.

I have a position in ESNT as of this writing.

Even though we had some interim weakness last week, the New York Stock Exchange Advance Decline line (NYAD) continued its recent ramp up with another new high to close out the week, which means the trend for stocks remains up. 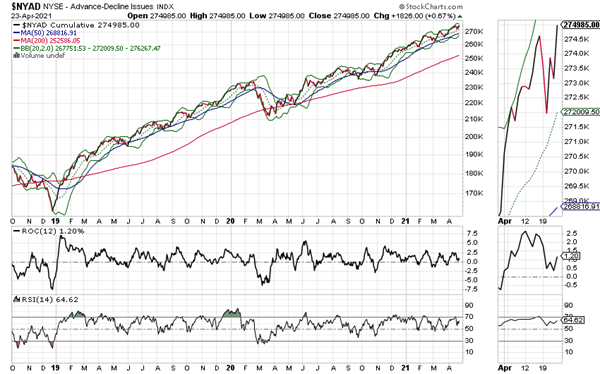 Indeed, as long as NYAD continues to make new highs, remains above its 50- and 200-day moving averages, and its corresponding RSI reading remains above 50, the trend remains up. This combined set of observations has been extremely reliable since 2016 and shows no signs of becoming unreliable as of this writing. 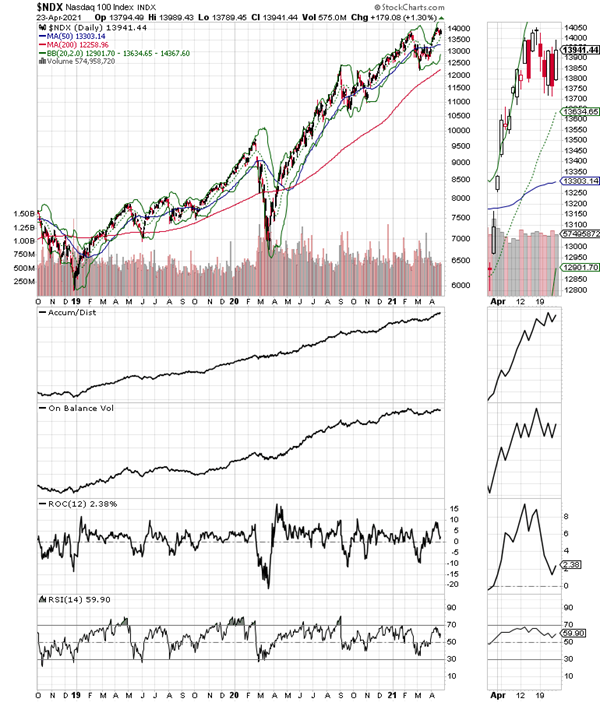 The Nasdaq 100 index (NDX), failed to make a new high and may be entering a consolidation pattern as money moves away from technology again. But the action in NYAD suggests that money is still coming into the stock market even if tech flows are slowing. 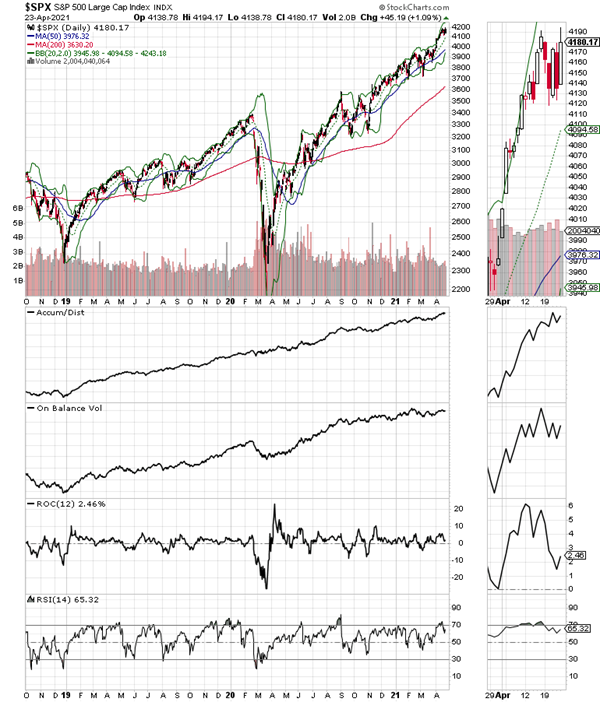 Bond yields continue to move lower with the US Ten Year note (TNX) and the US 30 Year T-bond (TYX) now testing their respective 50-day moving averages. This comes despite the inflationary portents of supply chain problems reported in PMI reports and surging housing and lumber data. 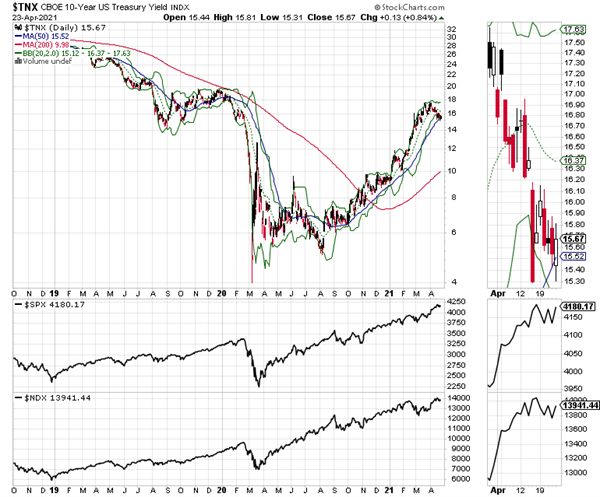 Indeed, the TYX is now below its 50-day moving average suggesting that the Fed and other central banks may be buying bonds more aggressively than the market realizes. 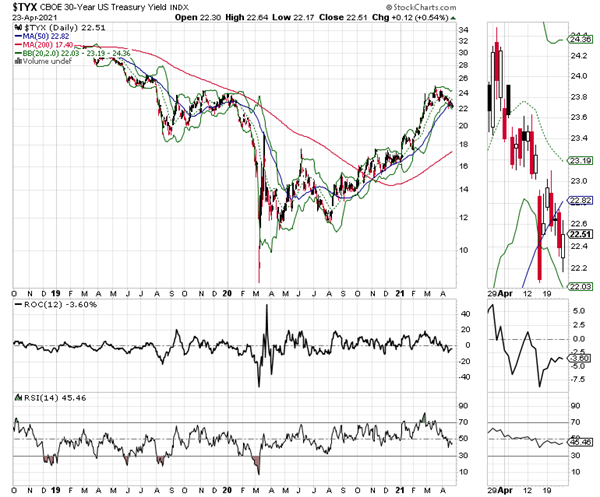 The effect of these lower yields is fueling the housing market further as new home sales are increasing due to tight supplies as lumber prices continue to climb. Again note that the dips are being bought in lumber stocks (LPX) and housing stocks (PHM). 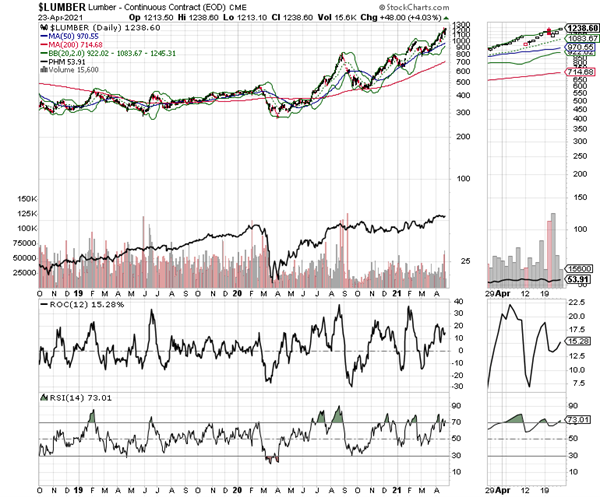 The bottom line is that money continues to move aggressively into lumber and related stocks. I own shares in PHM and LPX as of this writing.