10-Year Treasury yields fell, after breaking the uptrend from January the previous week (red line in Figure 1), closing at 1.567%, remaining below 1.6%, a key area. It’s a positive sign that rates have stopped rising sharply and appear to have stabilized for now. If this trend continues, it's likely to fuel the broad market higher.

Watch rates this week. On the other hand, if rates break the downtrend (purple line) and close above 1.6% and continue to rise, closing above 1.7% would raise concerns that rates will rise again and could be the catalyst for a market correction.

It remains concerning with the Nasdaq near record highs that daily new highs closed on 4/24 at 173 (red circle) and are nowhere near their highs of 708 set on 2/8/21(purple circle) or above 4/5 when they reached 269 (green circle). (see Figure 2). Watch if this trend continues higher if new highs begins to broaden or if they continue to lag. If new highs do lag, the rally will start to fade over the next week or two.

Watching the new lows on the New York Stock exchange is a simple technical tool that helps awareness about the immediate trend's direction. In my book, Journey to Wealth, when the new lows are below 25, the market is very strong (very low risk and prices tend to rise).

On 3/25, the NYSE new lows peaked at 207 (orange circle) and then immediately contracted to 11 on 4/1 (blue). New lows have remained in the bullish zone below 25 for the past four weeks. On 4/23, new lows closed at 14 (green), even lower than on 4/16 (pink), continuing to show healthy underlying internal strength.

Continue to monitor the new lows on the New York Stock Exchange if they start to expand. As long as they remain between 25 and 50, the odds of a further rally are likely, and risk is low. On the other hand, if new lows begin to expand, it would suggest a higher risk environment and more caution. 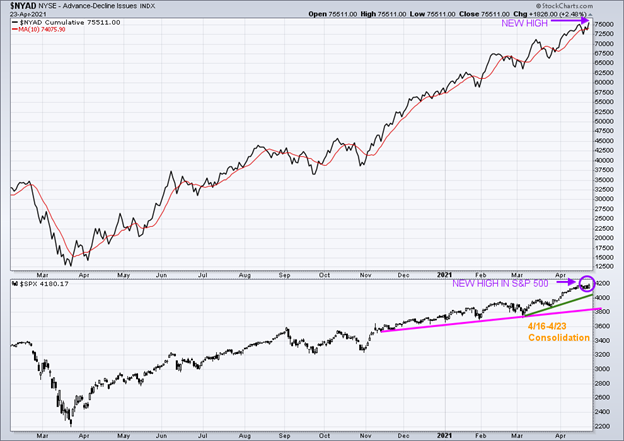 In the top portion of the chart (Figure: 4), you will notice The NYSE A/D line once again made a new high (top chart purple arrow). The S&P 500 consolidated this week, making an intraday record high on 4/23 but closed just below its high made on 4/16/21 (lower chart purple circle). Historically rarely does the market make a final peak when the cumulative advance-decline line makes a new high.

Market breadth on the New York Stock Exchange remains positive. The advance/decline line (A/D) is one of my favorite technical indicators that measures market breadth. The A/D line shows how many stocks are participating in a stock market rally or decline. It represents a cumulative total of the number of stocks advancing versus the number of stocks declining. When the A/D Line rises, it means that more stocks are rising than declining (and vice versa).

The S&P 500 (SPX) closed at 4180.17, keeping the shorter-term uptrend intact. A close below initial support at 4000.00 would break the uptrend (green line) and warn of potential weakness. A close below 3723.34, the 3/4 low, and the longer-term trend line (pink) would likely trip the sell stops and increase selling pressure beginning a more sustained decline.

Risk comes from not knowing what you are doing. – Warren Buffett

What ETFs to Observe This Week for Direction? 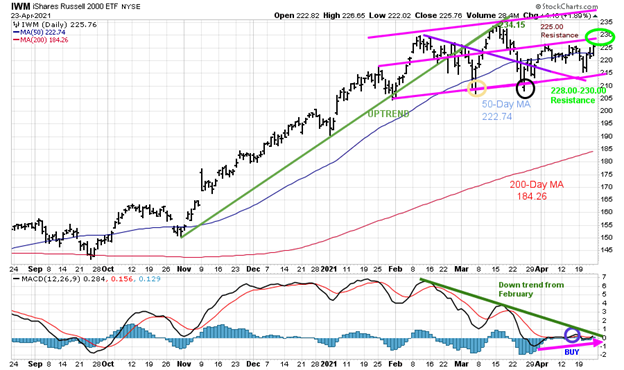 After slightly penetrating the bottom of the channel and the 50-day MA (yellow circle), on 3/5 at 207.21 stalled at 234.15, the upper channel that coincided with the old uptrend line from November (in dark green). Then IWM fell below the 50-day MA to the lower channel (black circle), where the buyers stepped in, successfully testing the March 4 low.

On the other hand, if there is no follow-through to the upside, support is at 222.00, followed by 215.00. A close below 215.00 would be a short-term negative. A close below 207.21, the 3/5 low, is likely to trip the sell stops and be a clue more weakness will occur. With recent strength the past two weeks and the successful test of the March lows, I am expecting higher prices in the near term.

The bottom half of the chart is MACD (12, 26, 9), a measure of momentum. MACD remains on a (blue circle) turning up from below 0, not quite breaking the downtrend (green line). It would be positive if MACD would break the downtrend and start to accelerate higher, showing more upside momentum. 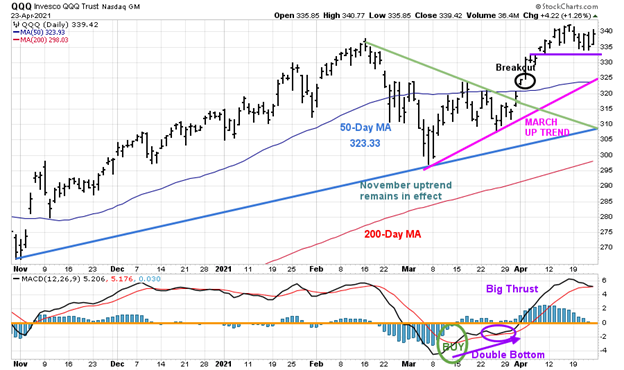 A close below 305.00 would break the November uptrend (blue line) and imply the start of a more significant correction.

The bottom half of the chart is MACD (12, 26, 9, a measure of momentum. MACD remains on its early March buy (green circle) but has turned down since its big thrust to the upside. Its positive MACD confirmed the high in QQQ, and the trend is up. The first sell that occurs is likely not to be as significant as the second MACD sell over the next few weeks. 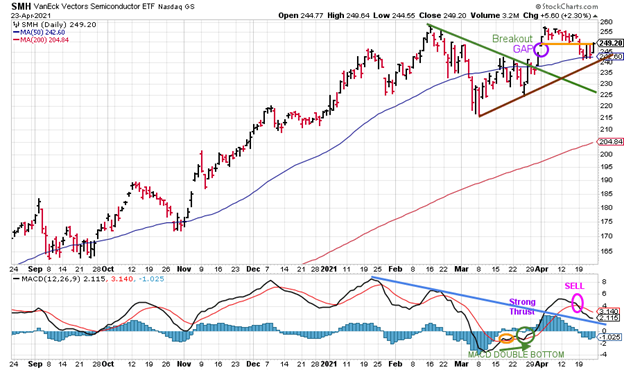 SMH was down last week -1.27%. SMH filled the gap on 4/19 and broke under the consolidation pattern. Short-term support at 248.00 did not hold during the week, negating the bullish pattern and canceling the upside objective of 261.00.

On the other hand, it was a positive sign that Friday’s recovery rally SMH was the best sector gaining 2.3%, leading the broad market higher. Its bullish SMH held the uptrend from the 3/3 low (brown line), and it closed above its 50 Day MA.

The lower chart is MACD, a measure of momentum. After rising from a favorable double bottom formation (green arrow), MACD generated a sell quickly. MACD remains above the downtrend (blue line) after the strong thrust in momentum. If MACD turns up now, that would be a positive sign, but note MACD is not yet below 0 for a safe entry. 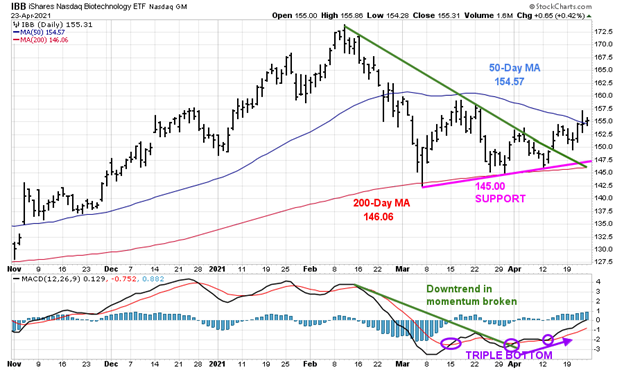 Biotechnology successfully tested its March and April low breaking the downtrend from February on 4/14/21.

Biotechnology was the leading sector for the week, up +1.34%, closing at 155.31. IBB's short-term trend is now up. It’s a positive sign IBB closed above its 50 Day MA for the first time since late February.

MACD (bottom chart) is on a buy and has broken the downtrend from February (green line). MACD has formed a triple bottom formation, one of the most bullish technical patterns. Continue to hold for now. 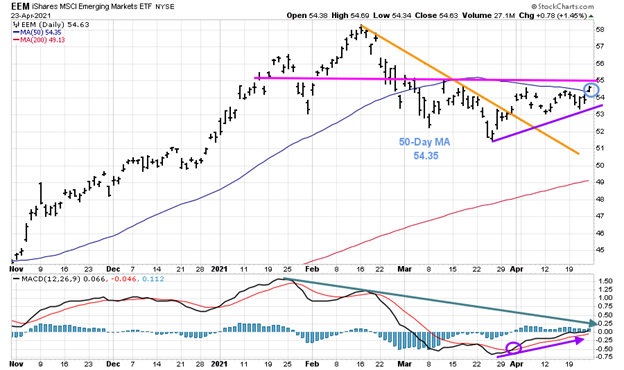 EEM appears to have successfully tested its 3/25 low. Emerging Markets (EEM) has been in a trading range since early April. EEM was up 0.52% last week, closing at 54.63, above its 50-day moving average for the first time since February.

MACD is on a buy. With further gains in EEM, look for MACD to gain momentum and break its downtrend from February (green line), which would be bullish for the near term.

The result through the up and down volatility of last week was nothing more than market indices consolidating in a narrow range near their highs. The Russell 2000 (IWM) and Biotechnology (IBB) more speculative areas rose last week as the major averages consolidated, finishing slightly lower. The tape action remains mostly favorable on light volume as traders wait for more news about economic data, taxes, and more corporate earnings results released this week. If Biotechnology, Small Caps, and Emerging Markets show strength, this would be the underlying catalyst to the major averages breaking out of their consolidations to the upside. Continue to benefit the doubt to the bulls unless there is a close below 207.21 for IWM and below 305.00 for QQQ.