US Dollar in Trouble Again

While many of us were distracted by the Memorial Day weekend, the greenback got itself in hot water again, explains Jeff Greenblatt of Lucas Wave International.

One has to wonder how many more lives it has before it succumbs for good. A serious look at the chart has a retest of the January low. I’m on record as saying should this condition get violated, we could end up with a retest of the 2008 financial crisis lows. Since inflation hawks talk about the ultimate destruction of the dollar, let’s take a look at the intermediate and long-term view. Do these people have a leg to stand on?

The Gann calendar has given excellent navigation throughout this process but especially well since the low. The current continuation chart shows a 36-day progression low to low to the main breakout point on February 25, which was a 336dg vibrational day. The range up was 4.36. In the world of price and time vibrations which is basically non-linear math and chaos theory, which is how markets work it uses whatever vibration will work. I’ve been showing you this phenomenon for several years. In this case the range up at 4.36 could vibrate at 43 and/or 36. We are not form-fitting, this is how strange attractors work and all pivots on a price chart are strange attractors. A strange attractor acts as a magnet. First it attracts, then it repels. From the high to the point on May 5, which was a 44dg day, the high was 91.435 so the 44 works as well as the difference which was 34dg.

What should concern everyone is the fact two of the past four days it has put in an upper tail. The first upper tail at 90.43 is at 43 days off the high. Still the price action did not collapse. Now on the intraday perspective there are several intraday readings in various time frames which work right now. I’m showing you the 180 chart because is 23 time units off the high with a pivot of 90.235. 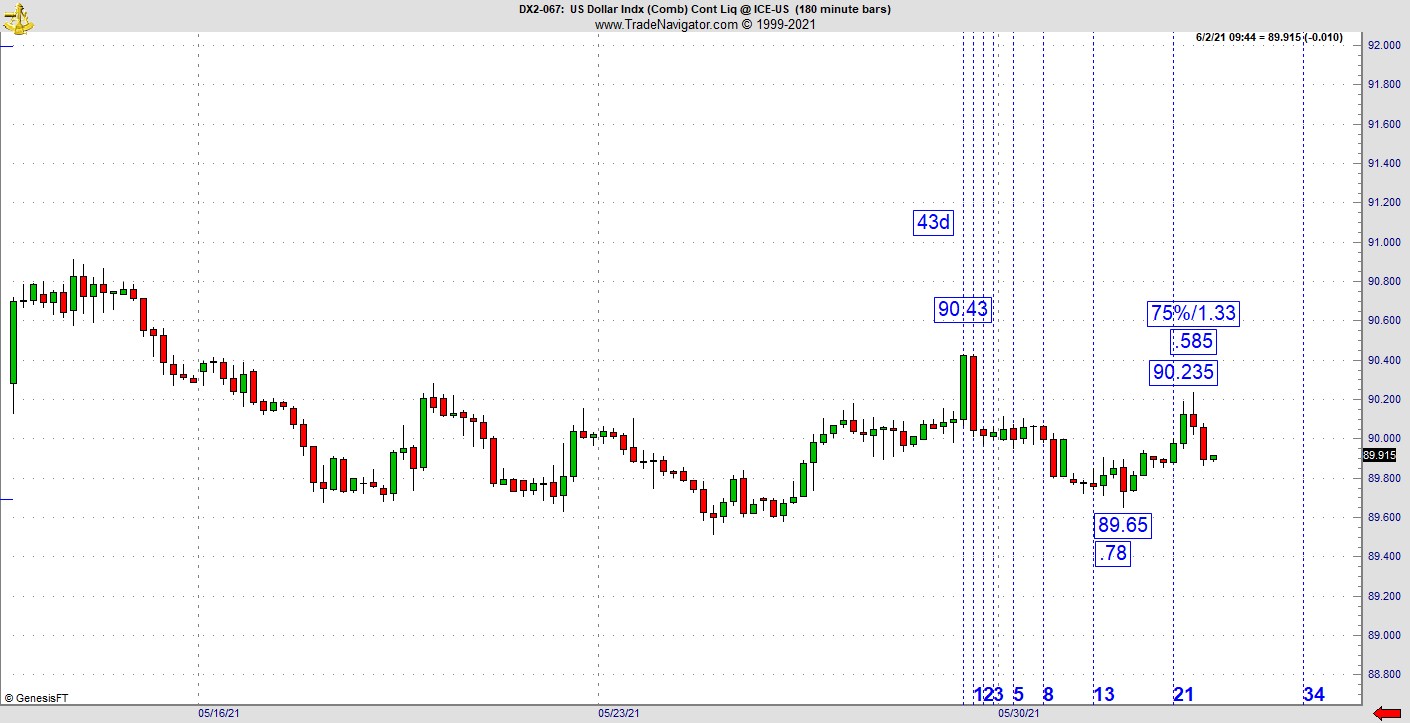 If the international banking community wants to rescue the greenback again, this is the time to do it as it is leaning bearish. Last thing I want to bring to your attention concerning this chart is the action within the channel lines. First of all, this chart found a low near at the bottom of the channel, which is where we’d hope it would occur. If it can navigate beyond the midline, the higher probability is a test of the upper descending line. This did not happen and one has to wonder why. On my trading charts in smaller time frames, when a pattern breaks through the midline, the higher probability is a path to the upper line. Now it sits below the midline and the path of least resistance is most definitely down.

We haven’t looked at the monthly in a while. Recall the greenback peaked on a 144-month high and the last time I saw an important chart peak on its 144 month high it was corn, which dropped over 60% in two years. Now its up 158% since April 2020. That’s a story for another day but part of the inflation problem.

Last but not least, the greenback experienced its 144-month high right on the Gann master time window at the March seasonal change point. I told you right there it was an extraordinary vibration and could spark a huge selloff. 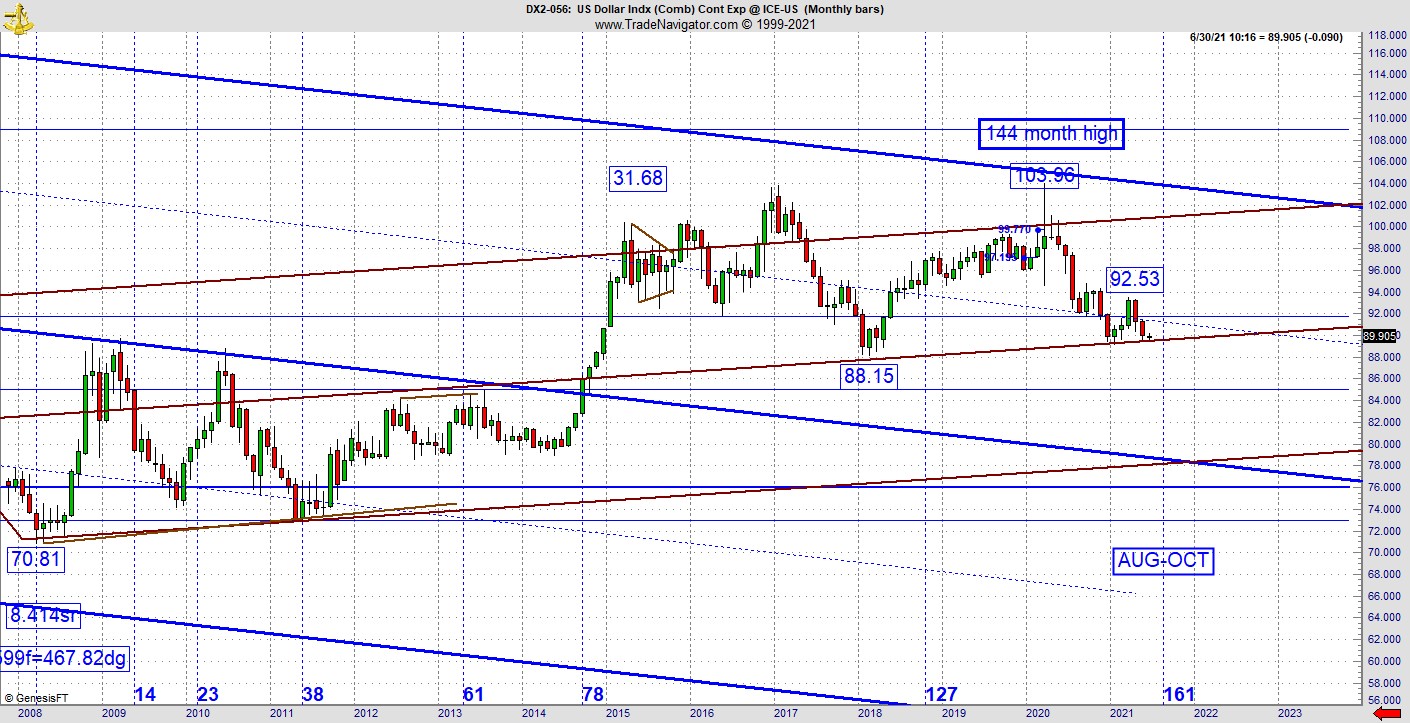 Obviously, that would be the case if I were making the comparison to the corn chart. I’m still as bearish now as I was a year ago with the chart giving little evidence to switch. On the monthly, the price action is sitting right on another long-term channel line, the midline. It tested this line back in January so there is nothing positive about it back down retesting again. Let’s take this one step further. The 161-month window from the financial crisis low hits from August to October. The most bullish scenario has this chart continuing sideways to the point 161 won’t be a factor. 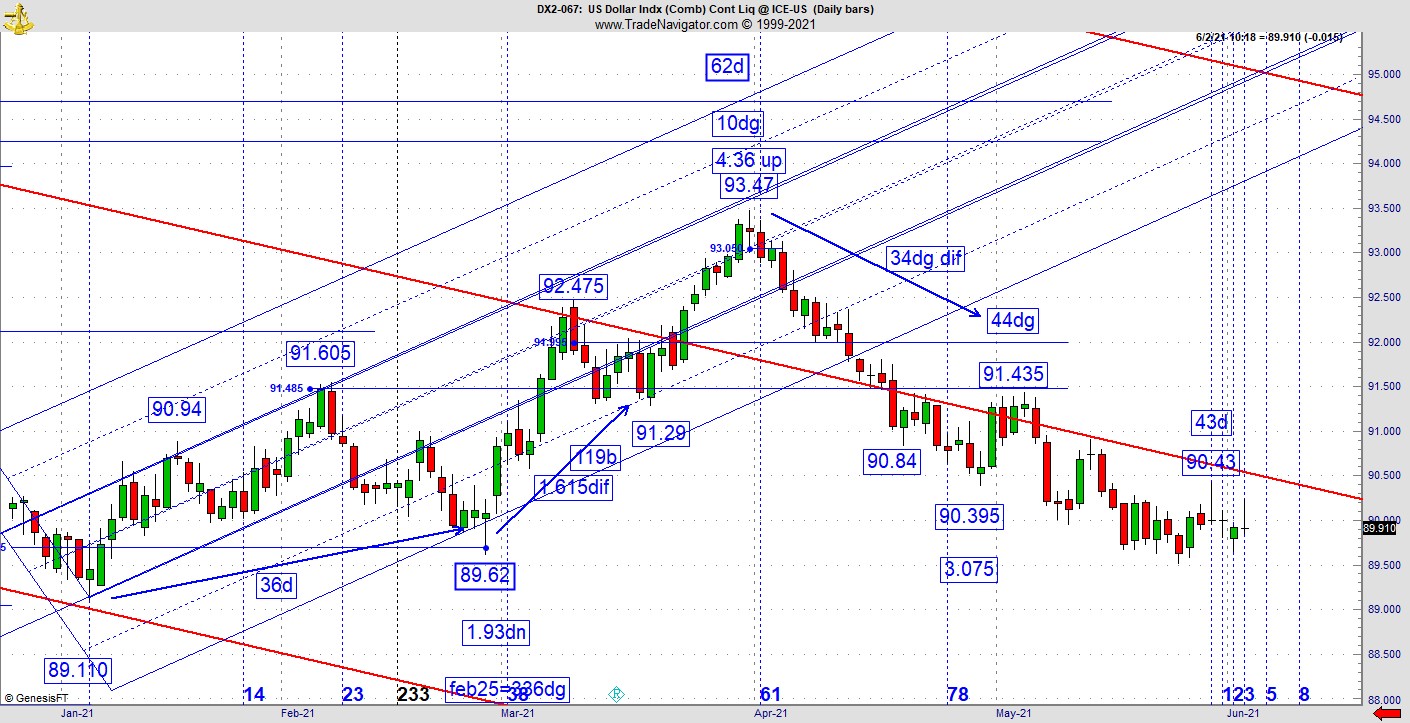 Where it could be a factor is if we get a rally very soon and the price action inverts into a high as opposed to a low. The most bearish aggressive scenario has the pattern accelerating south over the summer and finding a very hard low in that time of year, which ends up being the graveyard for stocks. So, there are any number of reasons to be concerned. The only shred of bullish evidence is the fact its right on longer-term support. But it's like the Maple Leafs, everyone knew they’d lose game 7, all they had to do was go out and do it. Here, until it violates, it hasn’t done it. I think its only a matter of time.

Finally, here’s a chart unlike the greenback, which made it through the midline and continues to hold. It’s the Bitcoin chart we’ve tracked for the past few weeks. Now it survived yet another retest thrust lower. Not totally shown is an 89 hour drop after a prior leg up of 9789 points to the 40,900 high. A two-thrust retest lower shows a lack of sellers so now the higher probability is a move to the upper descending channel line. No need to look beyond that. 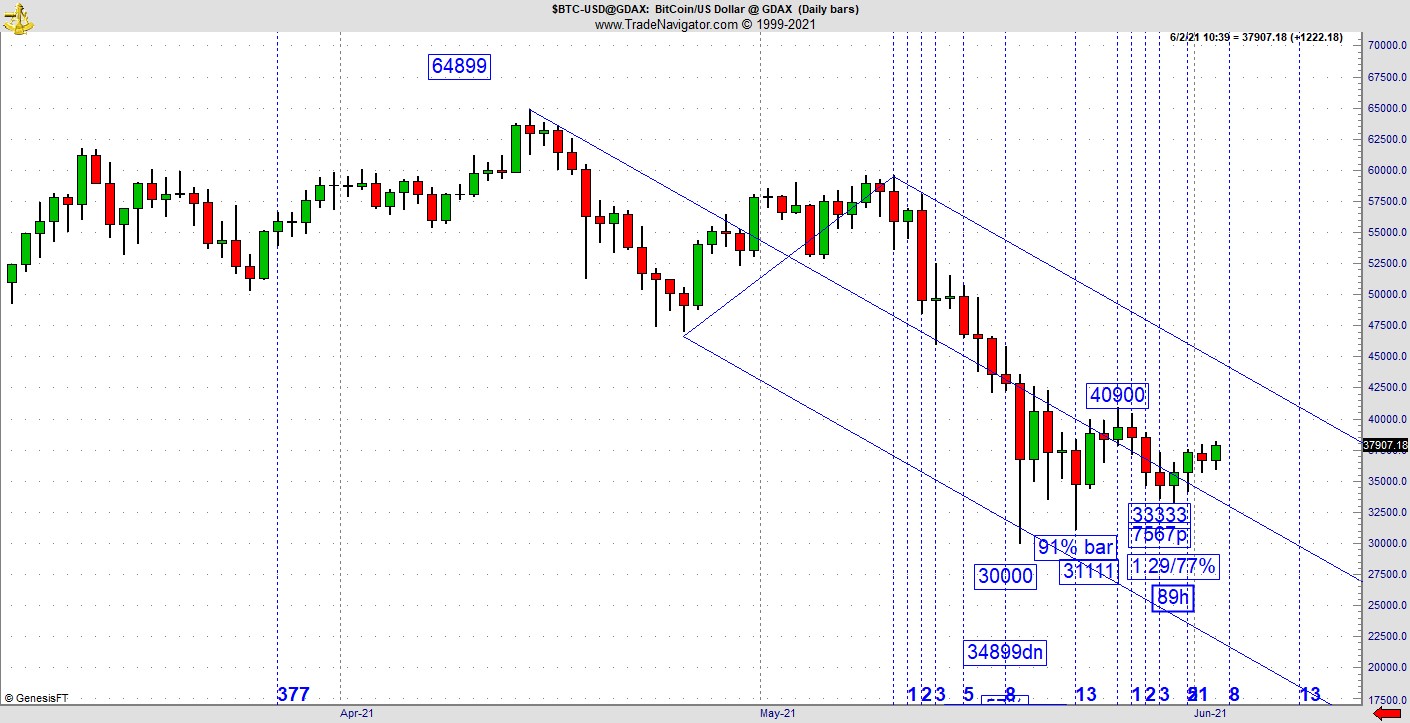