A Long Period of Ultra-Low Rates in the US

Friday's Non-Farm Payrolls report struck just the right tone for those hoping for a long period of ultra-low rates in the US, says Adam Button of ForexLive.com.

In a rare divergence of the antipodeans, the Australian dollar was the top-performing G10 currency while the New Zealand dollar lagged. CFTC positioning data continued to show shifts into CAD and EUR longs. Below is the latest technical picture for EUR net longs. 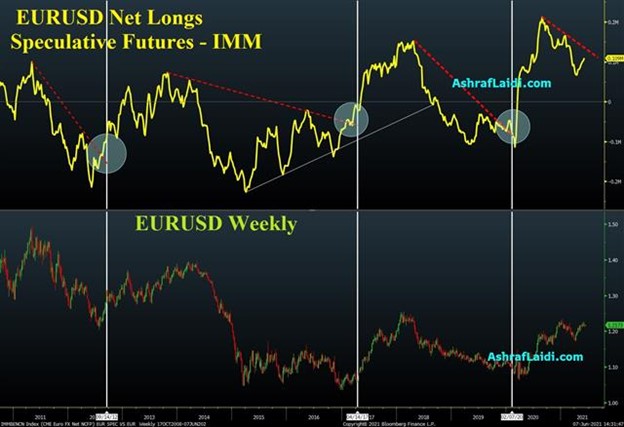 Non-Farm Payrolls rose 559K compared to 675K expected. The miss was even larger than it looked because the market had priced in something stronger after ADP and there were fears about a number close to one million.

With the miss, the entire ADP-inspired pop in the US dollar evaporated. Treasury yields fell sharply with 10s down 7.2 bps to 1.55% and threatening the low of the range since early March.

The average of the two most-recent jobs reports is 418K jobs. In normal times that would be great, but the US needs to create 8-10 million jobs to get back to pre-pandemic levels. At that pace it would take 19 months to recoup that plus they need to create at least 200K jobs a month for demographic changes.

What's especially troubling is that April and May should have been the easiest months for the US to add jobs with lockdown measures ending.

For the market though, it's a near-perfect report. Jobs are still strong enough to have solid economic growth and there's no need to worry about a premature taper.

This week starts off light on the economic calendar but there will be major focus on Thursday's CPI report. We get the sense though that the market is coming around to the Fed's view: That high inflation numbers will be temporary.