A Good Barometer of the Overall Consumer Mood Is Due Today

USD strength broadens in a thinly traded Friday session, partly on position squaring from Thursday's USD pullback as traders preferring to be flat ahead of next week's charged Fed event, says Adam Button of ForexLive.com.

Before Thursday's CPI report, we emphasized the pattern in the market around selling pops in the US dollar on inflation surprises. That's exactly what happened as a hot number was met almost immediately by dollar selling. UMich consumer sentiment is up next. 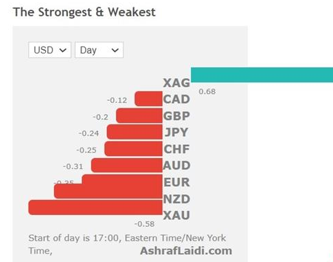 Even though we anticipated dollar selling at some point after CPI, we were struck by the speed and aggressiveness of the move. CPI rose 5.0% y/y compared to the 4.7% consensus and core numbers were similarly strong. Despite that, the spike in the dollar lasted only minutes.

Shortly after the report, the dollar fell to session lows and kept on falling. Ultimately, the moves were modest on net but that they came after the highest CPI reading since 2008 is a sure sign that the market has embraced the Fed's transient view on prices.

More evidence of that continues to come from the bond market. Yields plunged some more on Thursday with US 10s dropping another 5.9 bps to the lowest intraday since March. The cumulative move in the past week is now 20 bps.10-yr yield is now at 1.46%, off its latest 19-week low of 1.4266.

The power of the move makes us question whether we should be worried about economic weakness going forwards. Perhaps some of that reflects the US infrastructure impasse and pockets of rising covid cases, including in the UK.

There is also talk of a stumble in US consumer spending. To be sure, some decrease is anticipated because spending is roughly 15% above pre-covid levels in large part due to pent-up demand and stimulus checks. A good barometer of the overall consumer mood is due on Friday with the preliminary UMich consumer sentiment numbers.