Covid is fading away. The economy is improving. Thus, the only story worthy of debate is inflation. So let that be our focus today, says Steve Reitmeister, editor of Reitmeister Total Return. 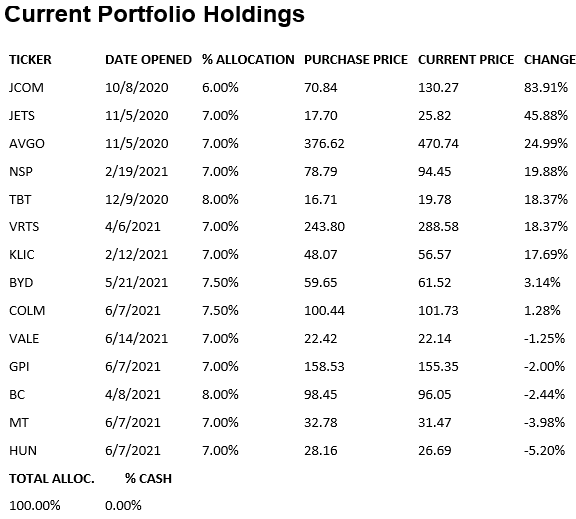 The Fed has entered its two-day window of meetings followed by an announcement Wednesday afternoon. The only thing investors care about this time around is their statements on inflation.

Is it just “transitory” as the Fed has stated in the recent past. Or is there enough persistence to the inflation with gauges hitting 4% to 5% of late to have them consider changing course. Most important of which would be a signal to lessen their $120 billion per month bond-buying perversion to keep rates lower than market forces would naturally allow. (Also known as Quantitative Easing (QE).

First the facts as laid bare in economic reports this past week:

And yes gold stars go out to those of you that know that PPI is the leading indicator of where CPI goes next. Thus, this is a signal of even higher inflation readings on the way.

Next up comes interpretation.

Yes, much of this is likely transitory because we are comparing the Covid-ridden deflationary environment of a year ago versus the rebounding economy of today. Not a fair comparison and inflation numbers should look better as we head out to the fall of this year.

Next up is that even though the unemployment rate is still at 5.8% that business owners are complaining that it is really hard to hire skilled labor. This leads to having to lure them away with ever higher compensation packages. This type of wage inflation is one of the most persistent kinds.

Then you have real estate where home values and rents are spiking around the country. Not a surprise as this is a natural outcome from having artificially low rates (remember 2008?).

No...that is not happening now. But perhaps now is like 2005 or 2006. And so maybe we don’t want to keep repeating history too much longer with these low rates creating equity bubbles and outsized borrowing.

Back to the point. Higher real estate living expenses are another persistent type of inflation. And thus, as we look at the full picture, this may not be as transitory as the Fed has previously stated. And that may come to the surface at this week’s Fed meetings. And that may show up in the first step of lowering the bond-spending program, which would be a VERY clear signal to investors that more steps to tamp down inflation are on the way.

What is an investor to do?

Look for trades that benefit from higher rates. We actually have four in the Reitmeister Total Return Portfolio at this moment:

Reity, is now a time to get more defensive on stocks?

That’s a hard NO.

Treasury rates would need to get much closer to 4% to put a real cramp into the valuation picture for stocks. But high-dividend stocks would have the toughest time in this environment as they become less attractive as rates go higher. So do consider rotating out of those picks.

But Reity, if all this is true, then why did Treasury rates actually head lower over the past couple weeks?

John Thomas of the Mad Hedge Fund Trader said it best. When everyone is on one side of the trade, then in a round of profit taking the other side is going to win. Meaning this move lower on rates will be short lived with the fundamental logic of higher rates unfolding in the weeks and months ahead.

You will note that over the past few sessions rates have started to move higher again. Still a bit off from the recent highs around 1.7%. And well off the 2%+ rate if the Fed was not overly manipulating the bond market with $120 billion a month in bond buying.

Now a quick word on the overall market. The thesis of a melt up in stock prices continues to look on target as the S&P creeps a bit by bit further above 4,200. I am glad that we got back to fully invested when we did even though there is still ample sector rotation making price action BEYOND volatile.

When the smoke clears from this period stocks will have clearly broken above 4,200 and making their way to 4,400 or maybe 4,500 before the next resting period. Growth at a reasonable price stocks are the way forward as the market’s appetite for overpriced growth stocks seems over after the latest washout for the group.

Gladly our focus on the POWR Ratings is a natural choice for finding these GAARP stocks packed with strong odds for future outperformance. More on our individual picks below...

That is the story for the past week...and the past month for that matter. But all in all, our portfolio is holding its own with plenty of stocks outperforming or getting their house in order for the next leg higher.

Now let’s dive in with insights on some of our noteworthy individual picks:

Columbia Sportswear (COLM): I was happy to pick up shares on the sell off from $114 to $100 as I sensed that level would prove solid support. And since then, they have been north of that mark. Helping the case was a fresh analyst note from Jonathan Komp at Baird who raised his target from $120 to $130 based upon strong demand indicators and positive channel checks.

ArcelorMittal (MT): The main thesis here is a world economy on the mend will need to build more of everything...and that always equates to higher demand for steel.

However, the materials group is at the epicenter of the volatility of late. Big up days and big down days. When the smoke clears, I like our odds for it to move nicely higher along with our most recent materials trade that follows...

Vale (VALE): There was an article yesterday morning that pushed me over the top to make the VALE trade. It was saying that if the Fed keeps ignoring inflation, then go keep loading up on inflation trade including commodities. Indeed, the Fed is downplaying inflation. Perhaps rightly so. But the point is that rising inflation goes hand in hand with an expanding economy. Especially one with accommodative Fed and trillions upon trillions in extra government spending. So that only added to the allure of this trade.

Broadcom (AVGO): Last Wednesday the analyst from Merrill Lynch was dog tired over the debate as to whether AVGO would hit $500. He wants to discuss the merits of it rising all the way to $580 over the next year. Given the chip shortage at hand coupled with high demand it is truly shocking how weak the share price has been. Yet as we have seen in the past, once Broadcom starts moving...it can run for a long time. We just need to first have that break above $500, then should be nice momentum from there.

Insperity (NSP): After getting to the mid-$90’s a few weeks back NSP saw a modest round of profit taking. Yet with a full array of strong signals in the employment market it is getting harder and harder for investors to ignore the upside potential of NSP. So, it is starting to rally again. Still believe it will cozy up closer to $100 coming into its next earnings report. If they impress as they did last time, then should easily break above with more upside to follow.

Brunswick (BC): Their entire group of consumer discretionary products keeps seeing wave after wave of profit taking. One analyst from BNP Paribas can’t take it anymore leading to new coverage as a Buy with $125 target. This emboldens me to hold on just a little bit longer for other investors to come around to this stellar growth story that is now also a tremendous value.

Yes, there is always a limit to the patience we should apply. And at a certain point need to cut your losses. But given wave after wave of positive earnings reports with raised guidance it just doesn’t seem like time to hop overboard. Instead, I think we should soon be sailing to ports north of here. So, lash yourself to the mast just a little while longer.

J2 Global (JCOM): As you know I hate volatility. It’s just too irrational for  a guy like me who cherishes logic and order. And that is why I continue to admire the stoic performance of JCOM, which is never flashy. Just falls less than the market average on most down days. And modestly outperforms on the up days. The net result is that it just keeps outpacing the market. Now shares are over $130, flexing a +83.91% return to date. But greatly looking forward to the day it pushes over 100%. That may not be too far in the future.