How 2021 is Shaping Up—and What's Coming Next

The “Money Flood” is a massive wave of cheap liquidity and abundant stimulus the likes of which our markets have NEVER before seen, explains Mike Larson, editor of Safe Money Report.

I said over and over, dating back to last year, that it was pointless to fight it. Your best bet was to go along for the ride, despite the large consequences that we’ll all have to deal with LATER.

So, how is that working out? Swimmingly!

US stocks weren’t the only ones riding the wave. Global equities overall had their seventh-best first half of the last century.

The most recent year things were better? That would be 1982, a year when “E.T. the Extra-Terrestrial” racked up a then-record $359 million in ticket sales, and when Argentina and the UK fought an undeclared war over the remote Falkland Islands. 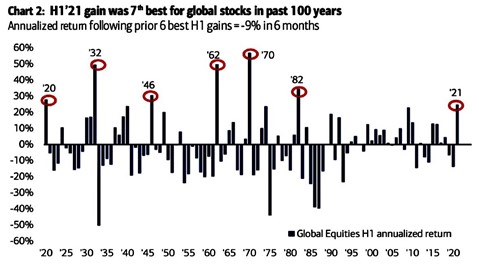 If you peel back the curtain, you see that select sectors like financials and energy handily beat the averages. Utilities lagged amid rising interest rates, and those rising rates also put pressure on precious metals.

Meanwhile, we’re already off to a nice start in the year’s second half—with the S&P 500 hitting a new record this week. So, does that portend an even-stronger finish?

I gave my detailed outlook—and provided appropriate recommendations to profit from it, but while I naturally can’t share everything, I will give you one bit of advice:

The calendar is shifting. But your approach should not. The market will eventually face some ugly challenges related to the debt and bubble risks I’ve discussed. But it’s not yet time to position for that.

Instead, it’s time to squeeze all the income...and all the profits...you can out of this “Money Flood” environment. As long as you do so, I’m convinced you’ll do very well for yourself.