During August several popular stocks among retail traders either sold off or took a breather and I received numerous emails asking me what to do, states Ian Murphy of MurphyTrading.com.

Stocks such as MRNA, TSLA, AMC, PLTR, BABA, and ASTR featured strongly. The queries usually involved a trader in a long position and sitting on a loss who was seeking advice on whether to sell or hold on in the hope of a recovery.

It’s never nice to be in this position, and unfortunately, the only advice I can offer is to remind traders they should only enter a trade based on a trigger from a proven strategy, and the exit criteria should be laid out in advance before they enter. So, a serious trader should never be in a situation where they don’t know what to do.

In fact, if we are using proper risk management tools the decision to exit will be made for us by a protective stop order. There is no easy way out of a trade, which has gone against us, especially if we held on too long. We must bite the bullet and hopefully learn from the experience.

A year has passed since we looked at this long-term trend-following strategy. It is designed to catch the most productive part of a market cycle using a monthly chart, but because of the time frame involved, it’s closer to the investing end of the spectrum. We call it a trading strategy because technical signals are used to determine the entries and exits as opposed to fundamental analysis. 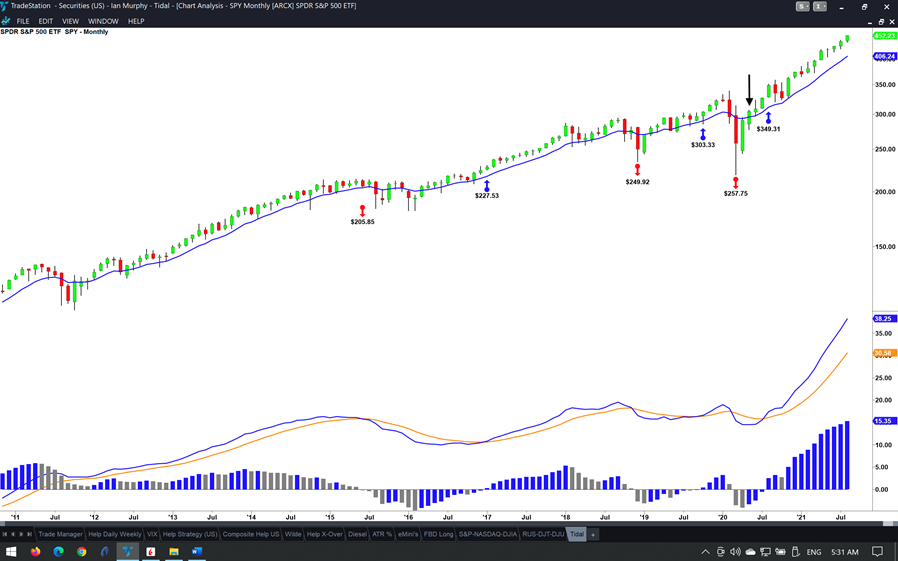 The strategy can be traded aggressively or conservatively with the aggressive approach being more active and involving slightly more risk but potentially more rewards also. ETFs or futures, which track a large equity market can be used to trade the strategy and this example follows the S&P500 using the popular SPDR ETF (SPY). Previous entries and exits with the conservative approach are shown above with blue and red arrows, while the most recent aggressive entry is also shown with the black arrow. The last aggressive entry was on June 30, 2020, and the most recent conservative entry was on this day last year.

Assuming there is no major selloff today, we can expect this month’s candle to close near its current price of $452.23, which will give a profit of 46.7% on the aggressive position and 29.5% on the more passive approach—very respectable returns!

There is no better strategy than this for highlighting the “busy fool” phenomena among traders. We can often spend a year trading the market only to see a detached passive approach outperform our best efforts. A trader who bought this ETF last year and did nothing else for 12 months is up almost 47%, how does that compare to your performance?

This strategy also demonstrates the importance of executing trades when valid triggers appear no matter how scary they look. This time last year was a nervous period in the markets, but there is always something to worry about and we need to trust our strategies.

The following is a direct quote from the September 2020 newsletter, which was sent out on August 31, 2020, informing readers that a conservative trigger was about to occur: “The moment when the risk looks the highest is frequently the point where the reward is greatest. If we wait until the risk has subsided, the trade is usually over and it’s time to offload positions to the late comers.”

The US equity market bounced strongly on August 20 and gave another trigger on this strategy. 500 shares were bought in the 2x geared ProShares Ultra S&P500 (SSO) and there was sufficient move to the upside to scale out 150 shares as shown below on the left chart. A stop will be trailed under the remainder of the position.

Four Micro E-Mini futures contracts were also bought (pink arrow) using Interactive Brokers and one was sold (red triangle) after a 1ATR move to the upside. As with the ETF, a stop will be trailed under the remaining three contracts.