The stock market appeared vulnerable to a pullback to start the week based on poor market internals, states Bonnie Gortler of bonniegortler.com.

However, buyers stepped in quickly, shifted from the defensive to more aggressive sectors, propelling the Nasdaq and S&P 500 (SPX) to record highs. The Russell 2000 surged Friday, leading the broad market higher, giving optimism to the bulls.

10-Year Treasury yields rose for the week closing at 1.31% (Figure 1), breaking the May downtrend (green line) on Thursday but turned lower on Friday, below resistance at 1.42% (Figure1).

Market breadth has been problematic. However, weekly market breadth improved for both the NYSE and Nasdaq. The New York Stock Exchange Index (NYSE) had 2541 advances and 954 declines. Nasdaq breadth was 3594 advances and 1141declines.

Its positive new lows contracted, to close at 32 on 8/27.  If new lows stay low, look for the market to continue to trend higher.

“Money will only make you more of what you already are.” — T Harv Eker 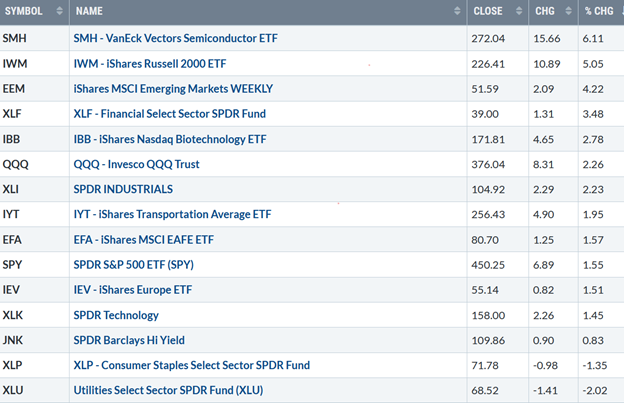 Lord Abbett High Yield, an open-end high-yield corporate bond fund, broke its uptrend in July, but it was a false breakdown. LAHYX then recovered in late July but failed to make a new high, and it declined again, holding the July Low.

High-yield mutual funds and high-yield ETFs such as HYG and JNK reversed, recovering their July losses last week, and now are at or near their all-time highs.  Continued strength in high-yields is positive for the broad market. On the other hand, if they stop rising and turn down, taking out the July low, it would signify that trouble lies ahead in the coming weeks to months.

It's positive more Nasdaq stocks made new highs last week, the highest since late June (blue circle).  Although the Nasdaq is at an all-time high, new highs remain well below the peak reading of 708 set on 2/8. Watch early this week if new highs continue to expand to over 332, which would be positive for the short term.  If they immediately contract, the rally could fizzle quickly.

The Daily Nasdaq-line AD-Line broke down in July.  The AD-Line improved last week to close near the old support and is in a position to break the July downtrend if there is positive market breadth.  Early next week will give a clue if the Nasdaq rally continues or stall. Positive breadth would signify more gains ahead, while negative breadth would signify the Nasdaq could pull back.

The Nasdaq-line AD-Line had closed at its lowest low since October 2020 before last week's rise. Overhead resistance is above. Consider the rally in Nasdaq suspect until it closes above where it broke down in July (green circle). 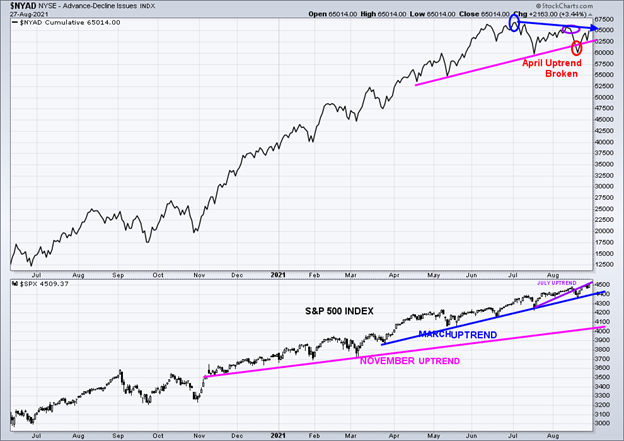 In the top portion of the chart (Figure: 9), the NYSE A/D line broke the April uptrend after failing to make a new high (blue arrow), confirming the S&P 500 high.
The lower chart is the S&P 500 Index in an uptrend from March (blue line), closing at 4509.37. The July uptrend broke (purple line). A short-lived decline followed (red circle), holding above the March uptrend (blue).

A close below 4367.00 would break the March uptrend and likely to trip sell stops on the S&P 500 toward 4250.00 or potentially lower. For now, the bulls get the benefit of the doubt. 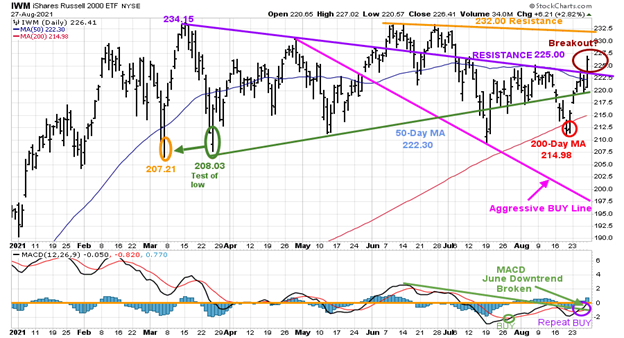 August IWM has been lagging the major averages and trading the 200-day MA.  However, IWM was strong last week, up over 5%, clearing resistance at 225.00 and closing above its 50-day MA, a possible breakout.

The bottom half of the chart is MACD (12, 26, 9), a measure of momentum.  After MACD had no sign of strength, MACD gave a repeat buy last week. It’s positive that MACD broke the June downtrend. Day traders watch closely for further strength or if MACD turns down. 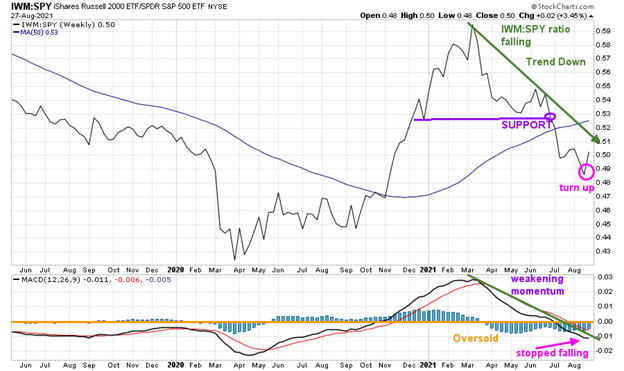 The weekly IWM/SPY ratio fell below support in June (purple line) and was trending lower.

Last week the IWM/SPY ratio turned up but remained below the 50-week moving average (MA), a sign of strength. MACD (in the lower chart) stopped falling to new lows, a positive sign. A turn-up and trend line break would be favorable. 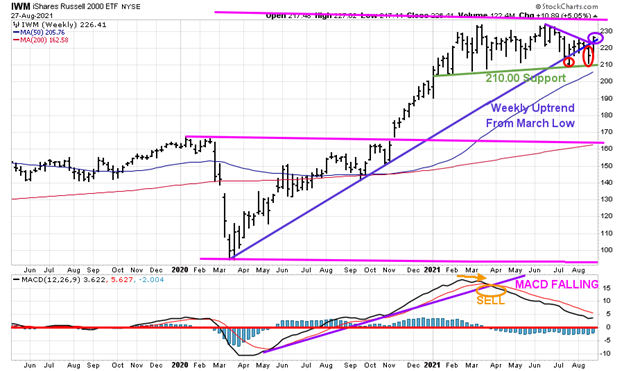 The Russell 2000 (IWM) (top chart) weekly support remains at 210.00. It’s positive IWM broke the weekly June downtrend last week after testing 210.00 support the previous week.  On the other hand, a weekly close below 210.00 would be negative.

MACD (lower chart) remains on a sell, not yet oversold, below 0, (red horizontal line) in a favorable buy position. However, it’s a hopeful sign MACD stopped falling. In sum: It’s too early to say that small caps are ready for a sustainable rally for the intermediate-term until IWM closes above resistance at 232.00.

The March uptrend remains intact (pink line). Since June, QQQ was in a trading range (orange rectangle) but appeared to have broken out to the upside. The new upside objective is 390.00.
Short-term support is at 370.00, followed by 360.00 and 350.00 at the bottom of the rectangle. It's disturbing Money flow (lower chart) is falling, not confirming the breakout in QQQ.

Any close below the March uptrend would imply a test of the 200-day MA, which stands 330.65 at the time of this writing. As long as QQQ closes above 370.00, the bulls are in control.

The tape shifted quickly from negative to positive as investors were optimistic after Chairman Jerome Powell of the Federal Reserve spoke on the economic outlook.  Market breadth on both the Nasdaq and NYSE improved significantly. The S&P 500 and Nasdaq set record highs. Small caps came to life, a hopeful sign of further gains ahead. Further confirmation is if IWM closes above 232.00.  Risk management remains important for the coming months, which tend to be volatile.  Review your portfolio and consider lightening up if any of your investments are underperforming, overly exposed in any sector, or not sleeping at night.  The bulls are in control for now but know it can quickly change with the bears coming out of hibernation unexpectedly.

Disclaimer: Although the information is made with a sincere effort for accuracy, it is not guaranteed that the information provided is a statement of fact. Nor can we guarantee the results of following any of the recommendations made herein. Readers are encouraged to meet with their own advisors to consider the suitability of investments for their own particular situations and for determination of their own risk levels. Past performance does not guarantee any future results.
Learn more about Bonnie Gortler at BonnieGortler.com.