However, the sector cooled down this year with a 9.2% loss and a 13.6% gain respectively, both lagging SPY’s 20% year-to-date performance. This year XBI has more than given back its outperformance over IBB in 2020 as it is underperforming IBB since last year (35% vs. 43%). In this article, I will share why XBI may be primed to outperform IBB and how you may capitalize on it.

The question we will address in this article is which of these two biotech ETFs appears likely to outperform based on technical analysis. 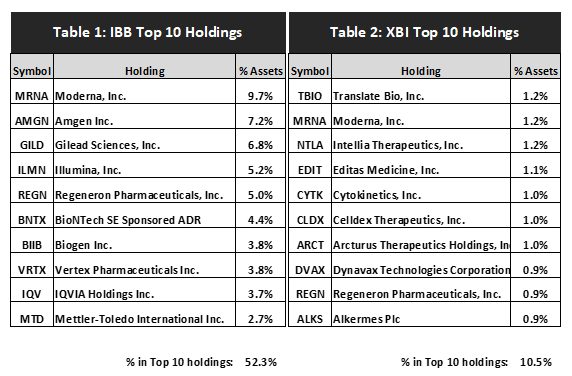 MRNA gaining 294% this year contributed greatly to IBB’s relative outperformance to XBI in 2021 as it holds 9.7% vs. 1.2% (although the ratio was much closer at the beginning of this year). I created a monthly XBI/IBB relative strength index (RelStr) to determine if it has reached an inflection point (Chart 1). In addition, the 10-month moving average was plotted to gauge how far RelStr has pulled away from the smoothed average. Notice that XBI peaked in January 2021 (Point A) and it has since fallen sharply as compared to IBB (Point B). 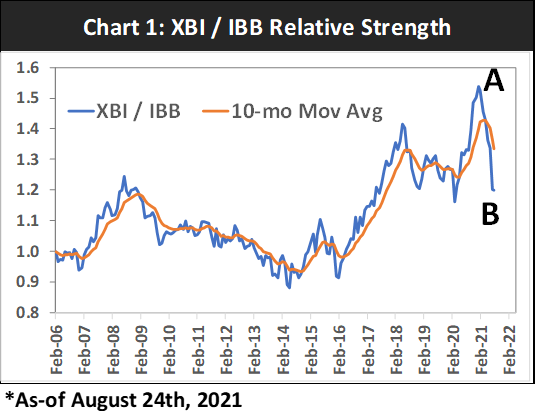 I plotted the RelStr in relation to its 10-month moving average (RS10MA) in Chart 2 (next page) and discovered a slightly down trending channel since the launch of XBI in 2006. Even though XBI’s relative performance versus IBB did not peak out until January, the gap between RelStr and its moving average peaked out two months prior in November (Point A). RS10MA broke above the upper trendline but reversed sharply and fell below the lower trendline (Point B), a mirror image of the penetration to Point A. Although RelStr is still falling, RS10MA started to rise this month. This is analogous to last December when RS10MA was falling while RelStr was rising but in the reverse. It may be an indication that XBI will outperform IBB in the coming months. 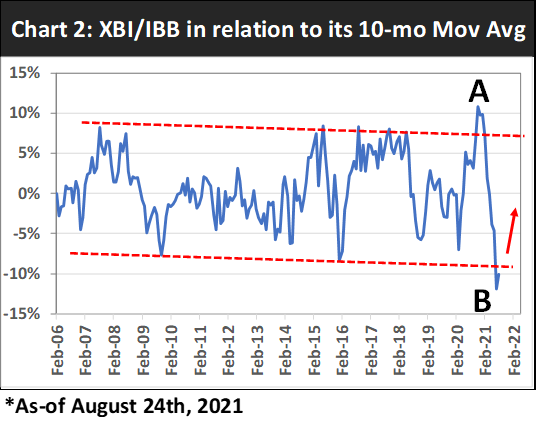 There are two takeaways from this article: first is that if you are looking to add biotech sector exposure to your portfolio, then you should consider choosing XBI over IBB as smaller stocks are likely to outperform their larger counterparts. Second, you could buy XBI and sell IBB in equal dollar amounts to open a market-neutral strategy to profit from the potential shift in relative performance. This may be a bit tricky as IBB shares are not always available at the brokerages for shorting. The availability varies from day to day and the cost for borrowing also fluctuates. If you are able to secure the shares needed, I would not pay more than a 5% annualized fee. I believe this long-short position has a chance to generate 11% profit potential in the next few months with reduced risk, which may be more than the upside potential for SPY. I will keep you updated on this recommendation in future issues.