Custer's Last Stand on the US Dollar?

The US dollar finally bounced for real after a relentless drop over the past couple of weeks, explains Jeff Greenblatt of Lucas Wave International.

This is the place it should’ve bounced, it’s a firm support area that launched the prior rally leg. This is the exact condition that makes navigating thru financial markets so tricky. As you know, I’ve been following each important turn with an eye to this time of year. So far, there is nothing in this pattern to suggest it has broken the back of the bear market, which started a year-and-a-half ago. The acid test to this point is the sudden reversal at the bearish descending channel line.

To summarize, the high came in on a replication of the first leg at 62 days up, the overall pattern at 163 days and its in the big 161-month window off the 2008 bottom. Look’s iron clad, doesn’t it? Not so fast, I had a couple of point of no return lines, which have yet to activate. One of them is point of no return lite, the July 30th low just discussed. Not only did the price action bounce off that line, it bounced on the 161dg vibrational day for the year on the Gann calendar.

Put that in context with all the prior golden spiral readings we’ve seen. Does it border on the realm of ridiculous at this point to think because of the bigger 161-month cycle, we could be firing off on a massive rally leg?

I doubt it. What I do see happening is a consolidation as the price action stays stuck for a while between the two golden spiral readings at the high and low. With all the money printing it would be hard to imagine the greenback could stage a sustained rally from this point. It's off to a good start but these types of patterns seem to know where the line in the sand is. Don’t ask me how they do it, but patterns have a way of stalling at channel or trend lines just when you think they won’t. Today the greenback already weakened as the rally phase hit 64 hours up, which does replicate with the high, which is 163 days. Replication here is a good sign for navigating a pattern but so is the Gann calendar.

To make this a little more complex, the Bitcoin rally stalled on a decent reading as well. This one is a 66% retracement on the 165dg day. It reacted so something is working. If this is a good reading for Bitcoin and it were to drop, its hard to imagine the greenback doing the same thing. This is a good enough reading on Bitcoin to speculate at this point if it were to take it out it could end up going a lot higher. 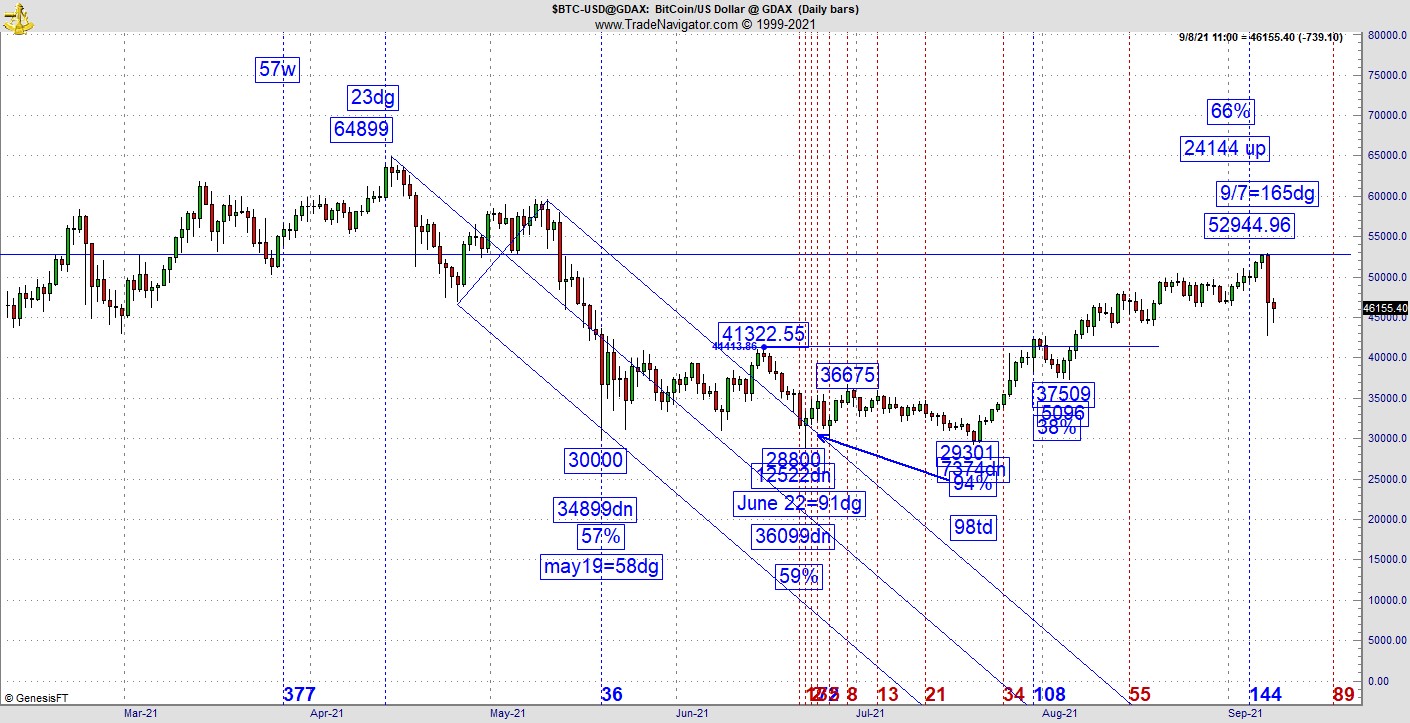 There is news outside the currency, and I touched on this a few weeks ago concerning the housing market. Recall this PHLX Housing Sector (HGX) chart with the 67 vibration. It retested and barely held but it did. On Wednesday it gapped down right into support. I covered Lennar (LEN) with its 357-day high on the back of the bottom on March 18, 2020, which was the 357dg day of the year. That one is starting to weaken as well. If housing stocks go, the market will follow. It's not a matter of if but when. 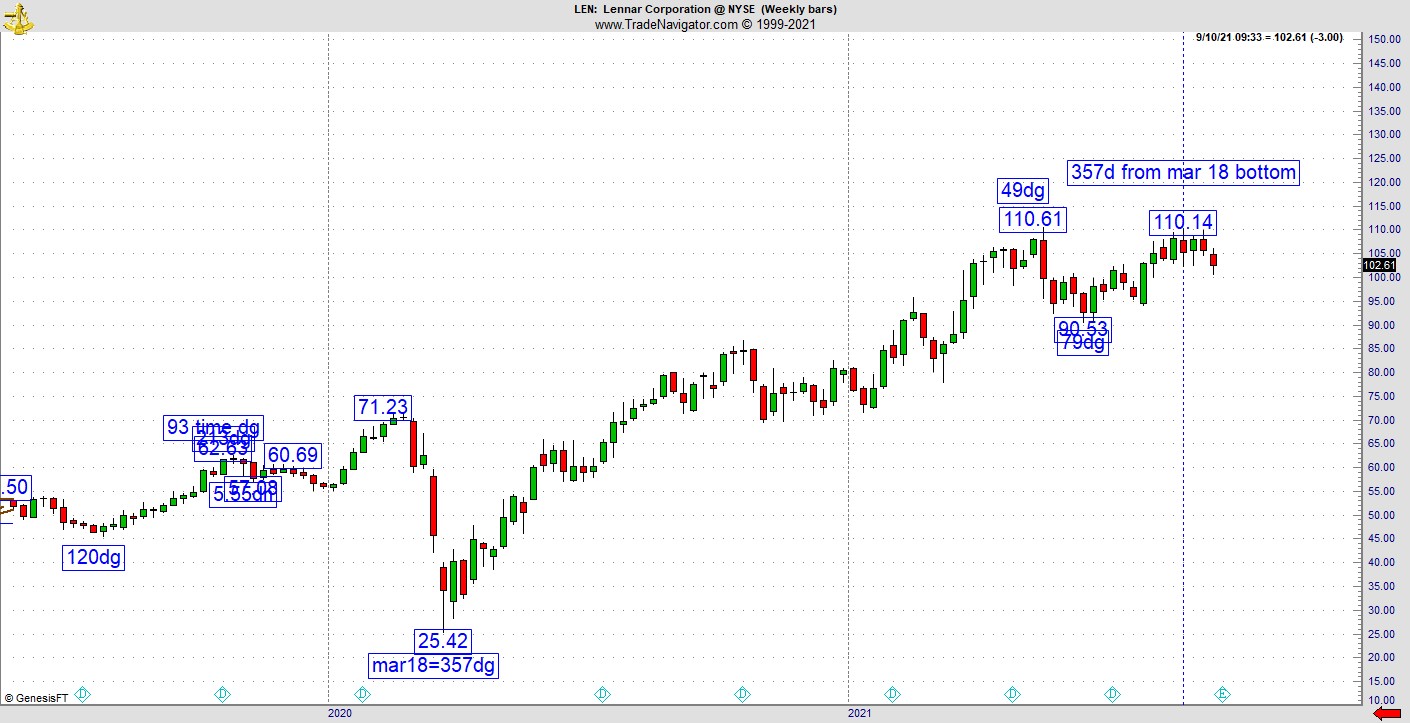 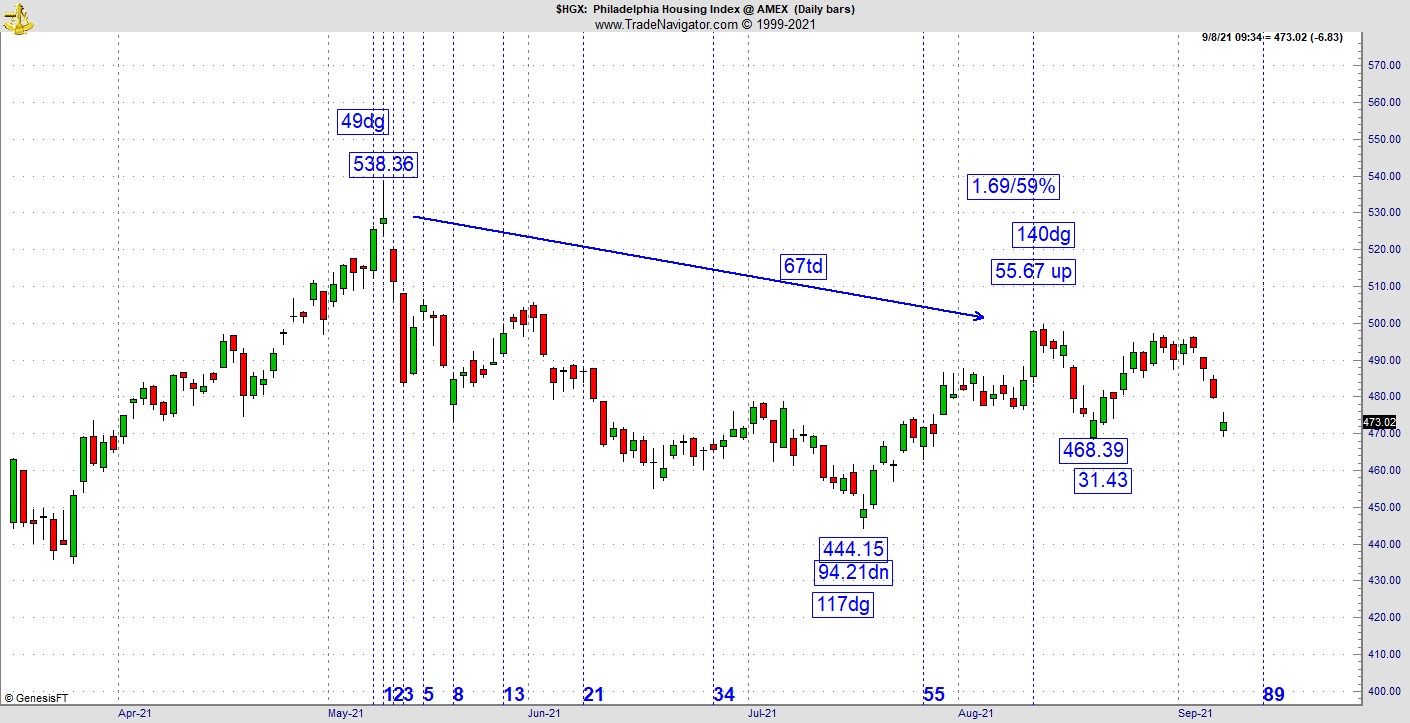 The big question is how to deal with a pattern like the US dollar. You may never trade this particular sequence but its safe to assume you’ve traded similar patterns in different time frames. So, let’s say you get really convicted over a pattern that looks like the dollar, but it suddenly reverses course at support, what do you do? 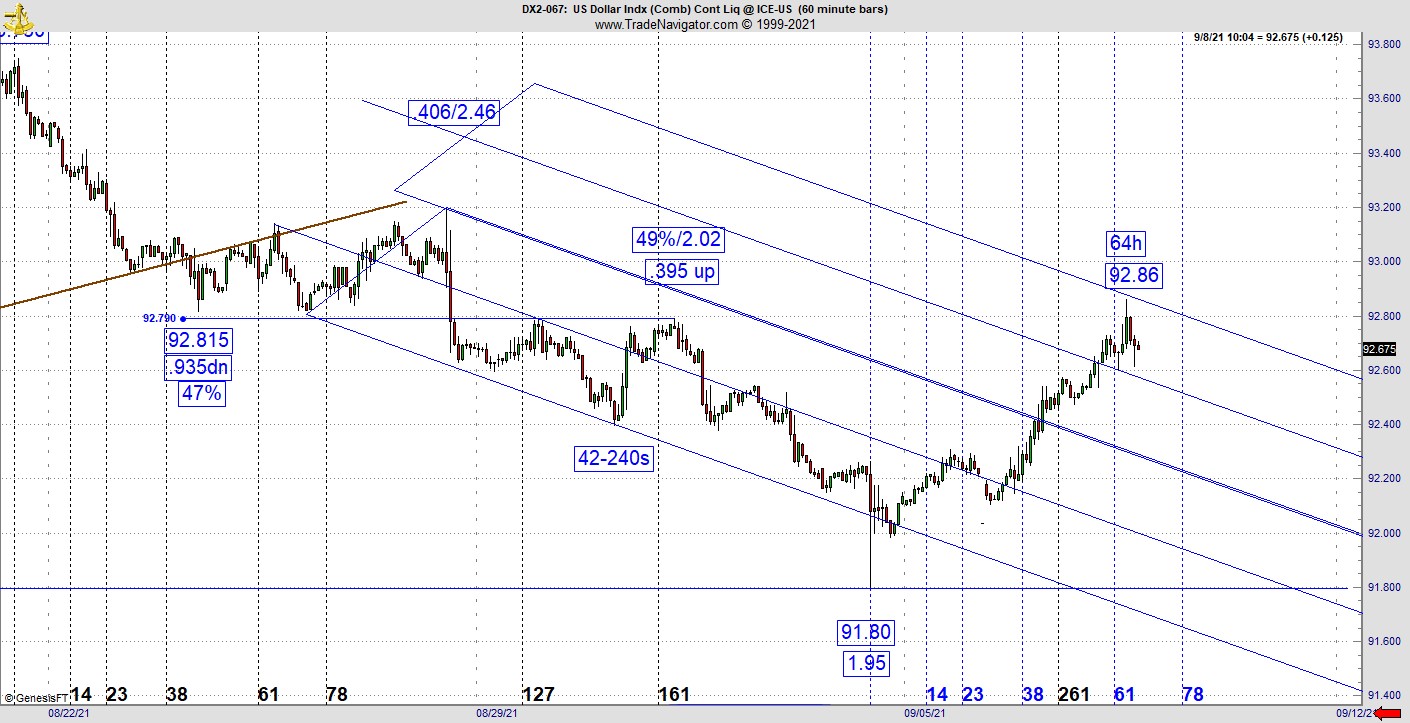 The trader’s job description does not include gambling, so one can’t assume anything. We work hard for profit, and nothing ruins a trader’s perspective than giving back gains. That has to be the cardinal sin of trading. Is it really my job to tell you what is going to happen? There’s a higher probability and lower probability. One of the holy grails of trading is to let the market tell you. What I mean by that is if you have profits on a first wave or A leg down, one has to protect them by keeping a trailing stop because any initial low is subject to even a 100% retracement to create a double top. Even if you are taken out and have a bearish conviction, nothing is stopping your from getting back in down the road.

That being said, welcome to September, the traditional graveyard for stocks. It’s been a wild year already and if something is going to happen, this is the season for it. There is already drama developing as numerous sources have reported Evergrande, one of the largest property development companies in China is $300 billion in debt and plan to suspend interest payments on loans from two banks due September 21. The big question here is to what degree the Chinese government will bail them out. If not, we could be staring down the barrel of a Lehman II. I wonder if a big Chinese real estate company were to go under, would that actually help the US dollar? Should a trading range start to develop, market participants might be thinking the same thing.