Day-to-Day Volatility Is on the Rise, Increasing Risk in the Near Term

Investors shifted from buyers to sellers after returning from the Labor Day holiday, states Bonnie Gortler of bonniegortler.com.

Market breadth deteriorated for both the NYSE and Nasdaq and is worrisome. The New York Stock Exchange Index (NYSE) had 983 advances and 2491 declines. Nasdaq had 1463 advances and 3267 declines.

A close above 1.42% implies yields to test 1.55%. With most expecting rates to rise, it would not surprise me if rates fell in the near term toward the August lows.

Watching New lows on the New York Stock exchange is a simple technical tool that helps awareness about the immediate trend's direction. Learn more in my book, Journey to Wealth. The market is very strong when the New Lows are below 25 (Very Low Risk, and prices tend to rise). When New Lows are between 25 and 50, the risk is low, and prices tend to rise.

New lows closed on 9/10 at 30, only slightly increased from the previous week, favoring a bullish bias until new lows rise and close above 150 (blue line).

“I have about concluded that wealth is a state of mind, and that anyone can acquire a wealthy state of mind by thinking rich thoughts.” —Edward Young”

Hi Yield mutual funds, and Hi Yield ETFs such as HYG and JNK closed at or near all-time highs despite the decline in U.S. Equities. Continued strength in Hi Yields is positive for the broad market.

However, if they begin to fall now and take out the July low, it would signify that trouble lies ahead.

Watch if New Highs begin to expand over 250 and then close above the 5/10 high of 332.  It will be favorable if new highs increase for the short term. For now, the contraction of new lows is a warning more weakness is likely.

The Daily Nasdaq-line AD-Line broke down in July, improved in August but failed to take out the July high.

Continued negative breadth breaking the August low would be negative.

On the other hand, positive breadth above the July high would be an encouraging sign of higher prices.

The Nasdaq-line AD-Line in August closed at its lowest low since October 2020.

As mentioned in the 09/03 Wealth Update, the improvement in the AD Line stopped at resistance, a suspect rally failing to get above the uptrend line (red line) where it broke down in July (green circle).

Further weakness in Nasdaq is likely unless market breadth improves. 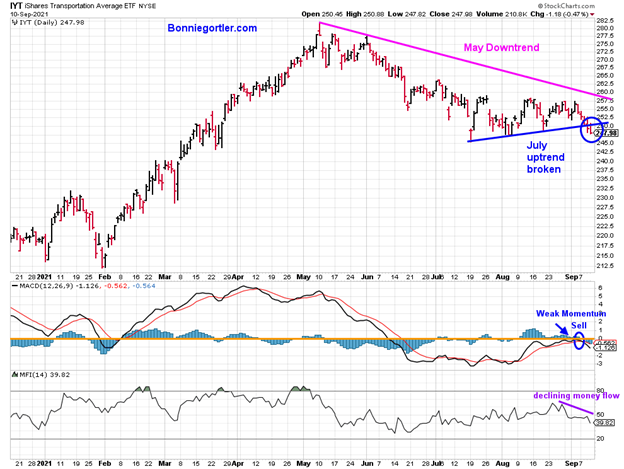 Transports have continued to lag and remain in a downtrend since May. MACD is on a sell and money flow is declining. Short term objective is between 235.00 and 237.00.

In early August, IWM had lagged the major averages. However, IWM came to life at the end of the month, clearing resistance at 225.00 and closing above its 50-Day MA, appearing to be a breakout as mentioned in the 09/03 Market Wealth Update. However, IWM never closed above resistance at 232.00 and turned down.

The bottom half of the chart is MACD (12, 26, 9), a measure of momentum. MACD generated a sell after recently breaking the June downtrend. There is a high probability 207.21 will be tested again. 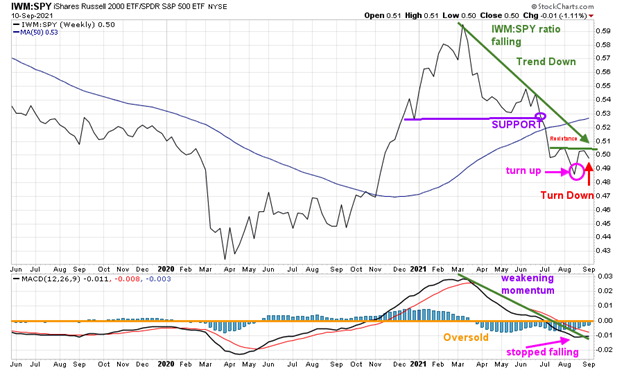 With the late August gains in IWM, the IWM/SPY ratio turned up. However, it failed to get through the July resistance and the July downtrend.

MACD (in the lower chart) stopped falling. Wait for a turn up above resistance for confirmation the decline is over, and the advance will resume. 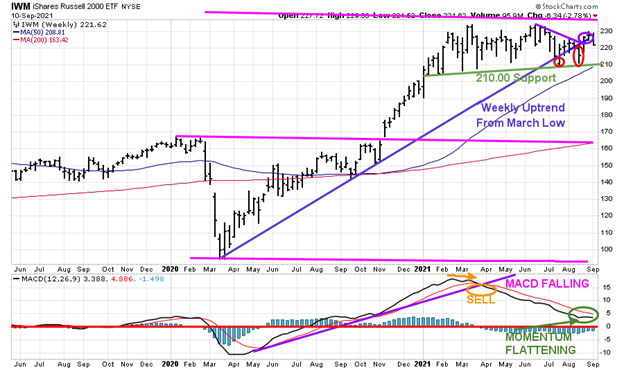 MACD (lower chart) remains on a sell. MACD is not yet oversold, below 0, (red horizontal line) in a favorable buy position. 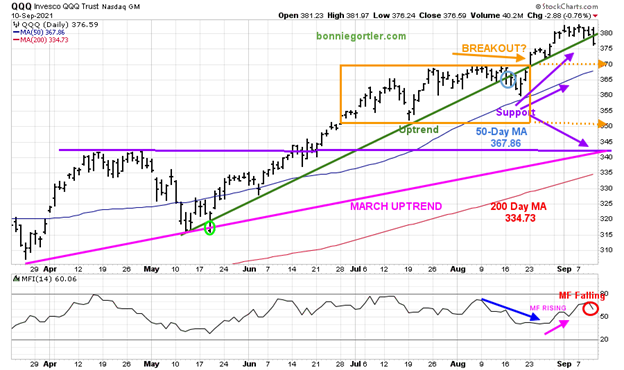 The March uptrend (top chart) remains intact (pink line). Since June, QQQ was in a trading range (orange rectangle) and then broke out to the upside in August. The upside objective remains at 390.00.  QQQ fell below the first support at 375.00 on Friday.

Notice the shift in money flow (lower chart) from rising to falling, no longer supporting a rise in QQQ (red circle). Any close below the March uptrend would likely hit sell stops to test the 200-day MA, which stands at 334.73 at this writing.

Caution in the Financial Sector - A potential shift in trend 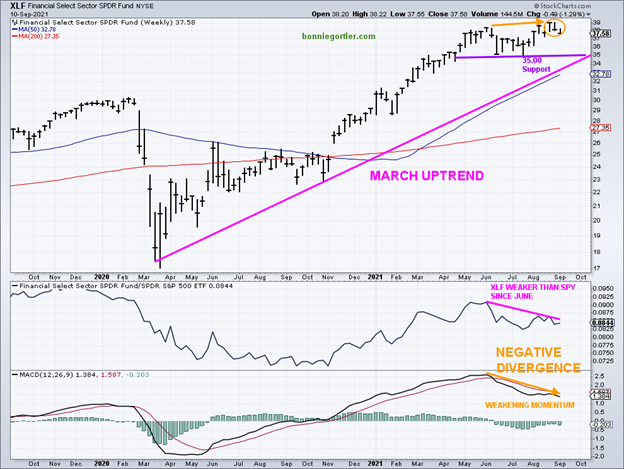 The latest technical action in Financials is worrisome and bears watching. XLF (top chart) closed at its low for the second week in a row (orange circle).

In the middle chart, the Financial Sector remains weaker than the S&P 500.

Notice how MACD momentum is weakening in the lower chart, forming a negative divergence, implying a potential trend shift in trend will occur. A negative or bearish divergence forms when the price makes higher highs, and MACD makes a lower high.

Financials have been leaders of the advance, but there is an increased risk of their leadership coming to an end.

Bears came out of hibernation. The Dow, S&P 500, and Nasdaq were all down last week, turning the tape negative. However, it was an orderly decline with no panic amongst traders. Market breadth deteriorated. Day-to-day volatility is on the rise, which increases risk in the near term. However, key support levels remain intact for now. Caution is advised early in the week to see if the weakness continues, implying further downside that could accelerate quickly or if the averages stabilize and turn up.