Is It Time to Get Bullish on Green Bud?

Almost two years ago I wrote a piece titled, Is It Time to Get Bullish on Green Bud? The cannabis stocks had been in the midst of a pretty serious crash in price after the bubble had burst a year or so beforehand, recalls Jesse Felder of The Felder Report.

I was curious to understand if they had fallen far enough out of favor with investors to become attractive from a valuation standpoint. In short, I concluded they hadn’t:

I find it hard to make the case that the valuations here are anywhere close to reasonable even after the 70% decline the stocks have suffered. But what’s really keeping me away is the fact that these stocks aren’t hated at all. In fact, Aurora (ACB), Canopy (CGC), and Cronos (CRON) are among the top ten most popular stocks among Robinhood traders. Hexo (HEXO) currently stands #11. Frankly, I’m amazed that these traders still haven’t given up on a group that has absolutely stunk up the place over the past six months. Perhaps they’re just dead set on learning the same lesson all those dotcom traders learned 20 years ago: Even after losing 50% and then another 50% sometimes it takes another 50% decline (or two) to find the bottom.

Well, this four-stock cannabis index has indeed fallen yet another 50%, after losing 50% and then another 50%, since that last post and so I am compelled to revisit the group. We are also getting pretty far along in the Nasdaq crash analog I shared. What’s more, there is also a subset within the broader sector that is far more attractive from a fundamental perspective than those stocks I looked at back in 2019. 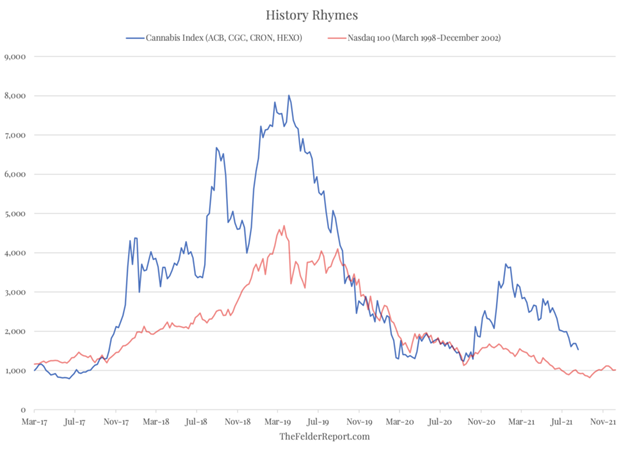 I am referring to the Multi-State Operators, or MSOs. MSOs are American companies that operate legally within certain states and while they don’t move product across state lines they can and do share intellectual property, employees, and such across the entirety of their geographic operations. They typically have very good market share within the states they do business and their profitability is also very good. What’s more, they are literally growing like weeds as legalization continues to expand at the state level and more and more people come to appreciate the health and recreation benefits of the associated products. 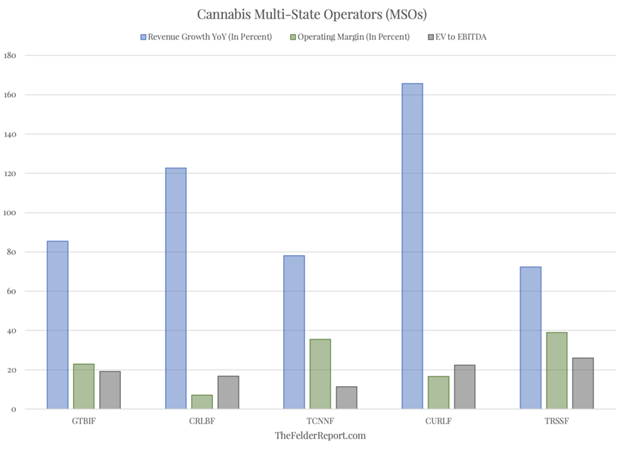 One of the most interesting things about these stocks is that, due to the fact that they don’t trade on a major US exchange, many investors can’t or simply won’t buy them. So even though they are growing more rapidly than many of the most popular growth stocks that trade on the Nasdaq or the NYSE, and in most cases, are far more profitable, they don’t show up in the portfolios of growth or value investors even though today they qualify for both! They don’t show up in passive portfolios, either. In this respect, they are very likely the most under-owned stocks in the market.

As such, it may now finally be time to get bullish on green bud. The stocks have been absolutely hammered recently. This appears to have washed out the bullish sentiment towards the entire group that was engendered by the bubble in the stocks a few years ago. Furthermore, the washout in sentiment has sucked a group of very profitable and rapidly growing companies into its vortex even though they continue to post stellar results and their future is only getting brighter. And that smells like opportunity to me.