Quadruple Witching and the First Half of September

Quadruple witching and the first half of September, often a challenging time for the market, are complete, states Bonnie Gortler of bonniegortler.com.

Despite market weakness last week, new lows closed on 9/17 at 30, the same as the previous week. Until new lows begin to rise and close above 150 (blue line), the major averages will likely work their way higher.

“The greatness of a man is not in how much wealth he acquires, but in his integrity and his ability to affect those around him positively.” - Bob Marley

High-yield mutual funds, and high-yield  ETFs such as HYG and JNK closed higher for the week closing at or near all-time highs despite the decline in US equities. Continued strength in high yields is positive for the broad market.

On the other hand, if they begin to fall now and take out the July low, it would signify that trouble lies ahead.

Watch if new highs begin to expand over 250 and then close above the 5/10 high of 332. It will be favorable if new highs increase for the short term. The contraction of new lows is a warning the rally is narrow. Several days this past week, there were more new lows than new highs. If the trend of new lows outpaces new highs, more weakness is likely, and risk will increase of a market correction in the Nasdaq.

The Daily Nasdaq-line AD-Line broke down in July, improved in August but failed to take out the July high.

It’s positive the Nasdaq-line AD-Line has made a higher low and turned up forming a bullish rising double bottom (black arrow), an encouraging sign of a successful test of the August lows.

On the other hand, negative breadth breaking the August low would cancel the double bottom pattern and be bearish implying more weakness to follow.

The Nasdaq-line AD-Line closed at its lowest low since October 2020 in early August. A suspect rally followed, failing to get above the uptrend line (red line), where it broke down in July (green circle). Breadth in Nasdaq has been weak in September.

A turn-up penetrating the downtrend line (in red) over resistance is needed for the rally in the Nasdaq to resume. Unless market breadth improves, look for weakness in the near term. 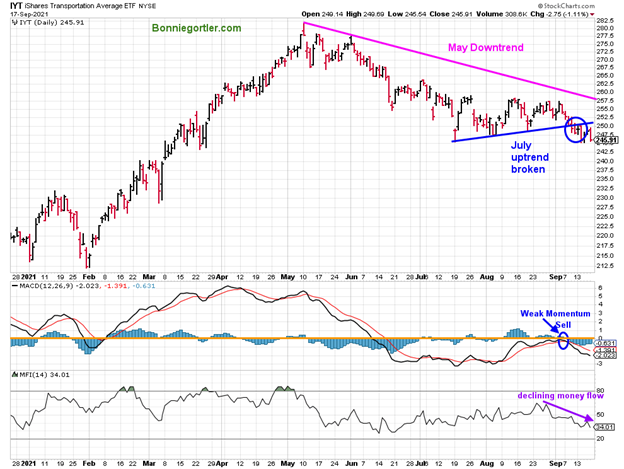 Transports have continued to lag and remain in a downtrend since May. MACD is on a sell, and money flow is declining. Short-term objective is between 235.00 and 237.00. 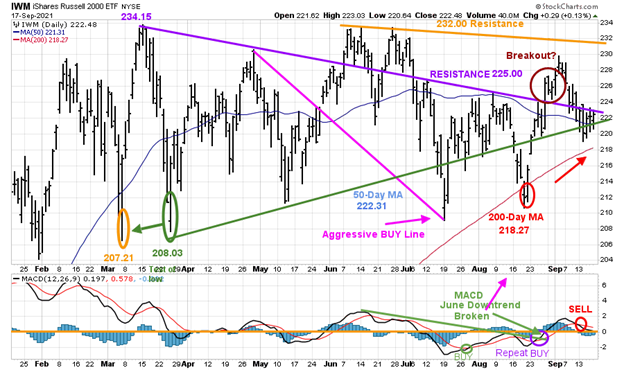 The bottom half of the chart is MACD (12, 26, 9), a measure of momentum. MACD had no follow-through after breaking the June downtrend and is on a sell. 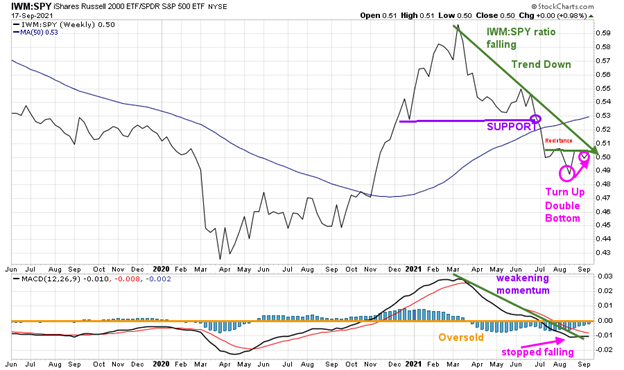 With the late August gains in IWM, the IWM/SPY ratio turned up. However, it failed to get through the July resistance and the July downtrend. It would be positive if the ratio turns up this week and gets over the August high.

MACD (in the lower chart) stopped falling. Wait for a turn up above resistance for confirmation the decline is over, and the advance will resume. 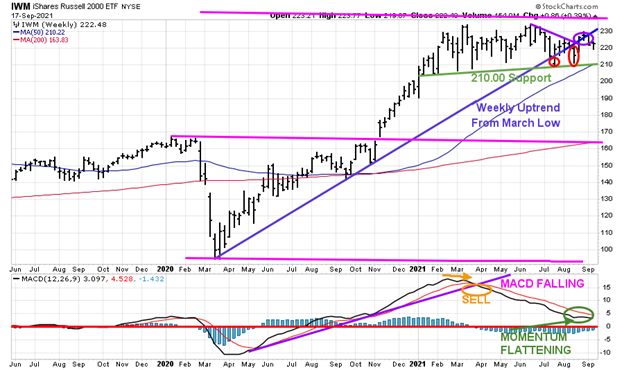 MACD (lower chart) remains on a sell, falling, not yet oversold, and below 0 (red horizontal line) in a favorable buy position. Be patient and wait until a safer pattern develops. 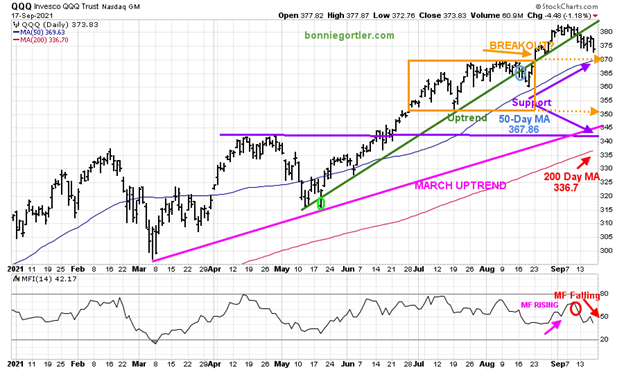 The March uptrend (top chart) remains intact (pink line). In June, QQQ was in a trading range (orange rectangle) and then broke out to the upside in August.

In the lower chart, notice the shift in money flow (from rising to falling, no longer supporting a rise in QQQ (red circle). Any close below the March uptrend would likely hit sell stops to test the 200-day MA, which stands at 336.7 at this writing.

Caution Recommended in the Financial Sector - A Potential Shift in Trend 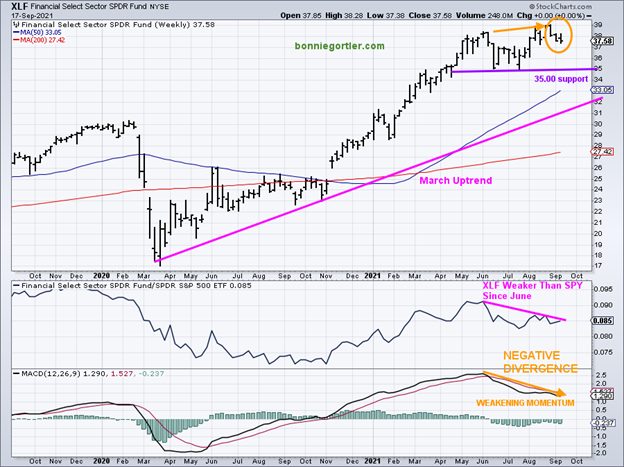 The technical action in Financials remains worrisome and bears watching. XLF (top chart) closed at or near its low for the third week in a row (orange circle).

In the middle chart, the Financial Sector has remained in a downtrend weaker than the S&P 500 since June.

Notice how MACD momentum is weakening in the lower chart, forming a negative divergence, implying a potential trend shift in trend will occur. A negative or bearish divergence forms when the price makes higher highs, and MACD makes a lower high.

Financials have been leaders of the advance, but there is a higher risk of their leadership coming to an end. 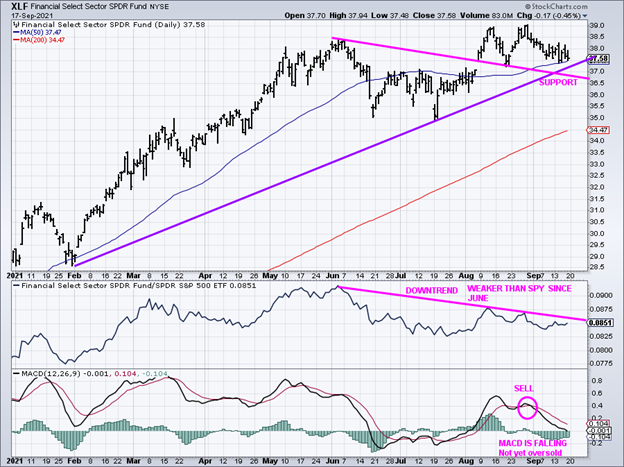 The Financials in the top chart was flat for the week closing at 37.58, remaining in its daily uptrend since February and slightly above its 50-day moving average. Support is between 36.60 and 37.00.

In the middle chart, the Financial Sector has remained in a downtrend weaker than the S&P 500 since June, the same as the weekly chart.

In the lower chart, notice how MACD continues to fall. Risk is considered high in the near term. With a bearish weekly chart, until there is turnup and a new buy, new entries should be delayed.

Is AAPL Breaking Down? 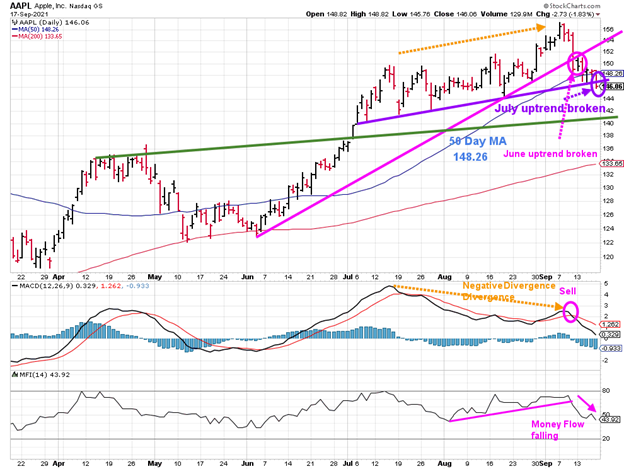 Apple made a high on 9/7/21. Since the high AAPL has moved lower, AAPL broke its uptrend (pink circle), closing at 146.06 below the 50-day moving average. Not a positive sign for the broad market.

MACD is on a sell. MACD and Money Flow are falling, no signs yet of a bottom.

AAPL shares are in 320 US-traded ETFs, including the largest holding in the SPDR S&P 500 (SPY), and the largest ETF allocation to AAPL is the Technology Select Sector SPDR Fund (XLK), 22.07%.

Market breadth continues to be a concern. However, it was not as negative as in July and August. Favorable double bottoms are forming as fear builds a market correction, and even a possible crash will occur. Now that quadruple expiration is complete, if support levels hold in the near term, new lows don’t expand, and investors step in to buy as they have done all year, end-of-quarter window dressing may begin early. The next few weeks could surprise to the upside if the major averages, Apple, Russell 2000, and Transports stabilize, and there is no follow-through to Friday’s weakness.