Is Oil About to Breakout of Its Long-Term Downtrend?

There is a compelling case to be made for favoring value stocks today, states Jesse Felder of The Felder Report.

Among those, the energy sector remains the most compelling by a long shot. In addition to being cheap, it’s really the only sector within the broad market where insiders continue to be very bullish (the broad market, in contrast, continues to be sold by the smartest of the smart money). So, it appears that insiders believe oil prices are likely to breakout above critical resistance represented by the upper trend line of its long-term downtrend channel. 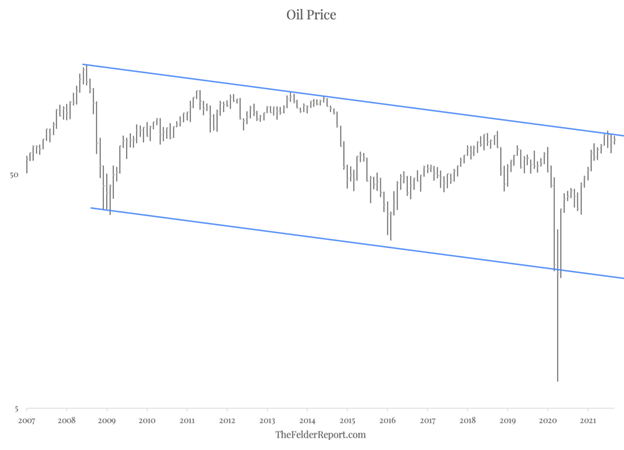 It’s also very encouraging to see commercial hedgers in crude oil futures actually cover their short positions (or hedge less) as oil prices rise. This is fairly unusual. Just by glancing at the chart below, it’s apparent that hedgers typically add to shorts (hedge more of their production) when prices rise and vice versa. The fact that they are actually adding exposure as prices have risen over the past year or so would appear to be a signal that they, too, are betting on a breakout higher in oil prices. 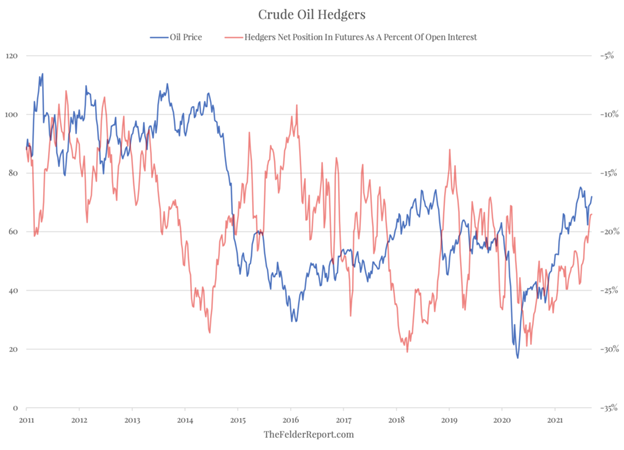 As Paul Tudor Jones has said, “When you get a range expansion, the market is sending you a very loud, clear signal that the market is getting ready to move in the direction of that expansion.” Such a breakout of a trend that dates back over a decade would represent an important sign in terms of the direction, of not only the broader commodity sector, but also inflation, as energy prices are a very important input for both. For these reasons, this chart and the activity of those most closely tied to it are worth keeping a close eye on.