Market breadth for both the NYSE and Nasdaq was negative. The New York Stock Exchange Index (NYSE) had 1560 advances and 1908 declines. Nasdaq had 1961 advances and 2861 declines. 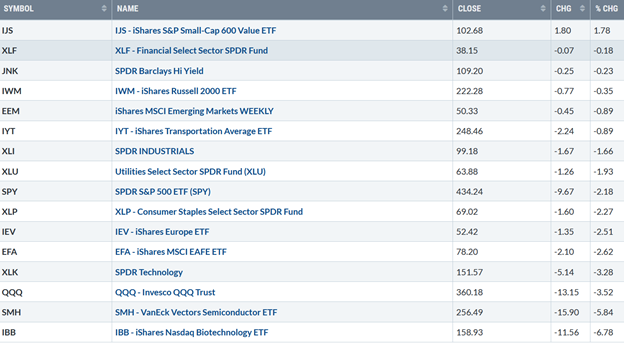 Lord Abbett High Yield, an open-end high yield corporate bond fund, broke its uptrend in July, a false breakdown, and then recovered to make a new high in early September.
Last week LAHYX failed to make a higher high and turned down, making a lower low than mid-September, giving a warning a test of the July low is likely (Figure 4).
A close below the July low would be negative and warn of further potential weakness in high yields and US equities.

The Daily Nasdaq AD-Line broke down in July (pink line) and trended lower into August after making lower highs in July. The Nasdaq AD-Line made a low in August and turned up unable to get through the July high (green circle).

The short-term September downtrend (red line) formed a rising double bottom (orange arrow). The AD-line failed to get through the June downtrend (black line) and turned down. However, the higher low is positive.

The Nasdaq-line AD-Line closed at its lowest low since October 2020 in early August. A suspect rally followed, failing to get above the uptrend line (red line), where it broke down in July (green circle).

A turn-up is needed penetrating the downtrend line (in red) over resistance for broad participation in Nasdaq stocks. If breadth weakens and takes out the August low, a more severe correction is likely. 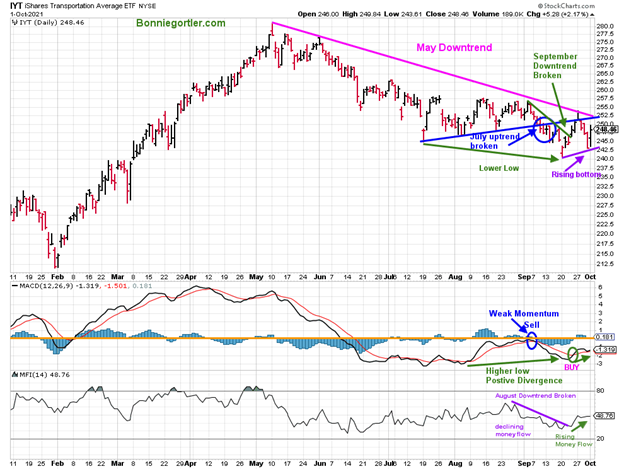 IYT was down -0.89%, closing at 248.46. Transports (IYT) have remained in a downtrend since May (pink line). However, it’s positive the short-term downtrend from September was broken (green line) and appears to have successfully tested the low.

MACD (middle chart) generated a buy, with a shift in money flow (lower graph) to rising from declining. IYT will confirm MACD if IYT closes above 252.50, breaking the May downtrend and a rising MACD. The continuing rise in money flow would be bullish. 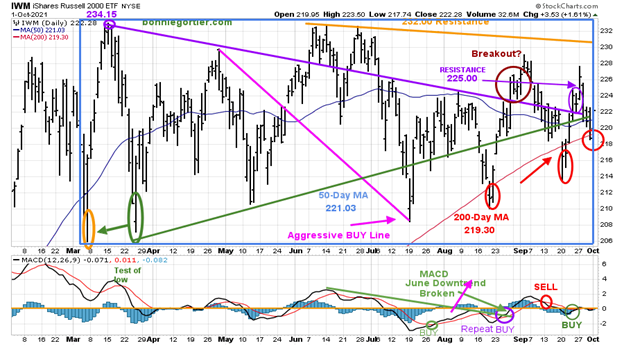 The bottom half of the chart is MACD (12, 26, 9), a measure of momentum. After breaking the June downtrend, MACD gave repeat buys in August but no meaningful rally. MACD is on a buy. No strength yet, but I’m optimistic.

Small caps show signs of improving relative strength compared to the S&P 500, and the underlying tape action is improving. 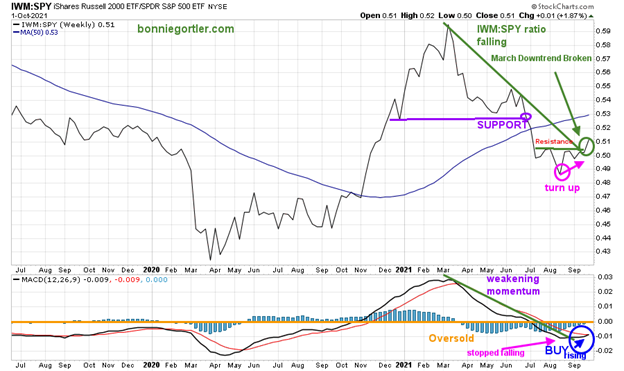 The IWM/SPY ratio turned up this past week, penetrating August resistance and breaking the March downtrend (green circle). The lower chart IWM/SPY MACD ratio confirms the breakout, rising and now on a buy (blue circle). The improved relative strength implies the odds are in favor for small caps to outperform the S&P 500. 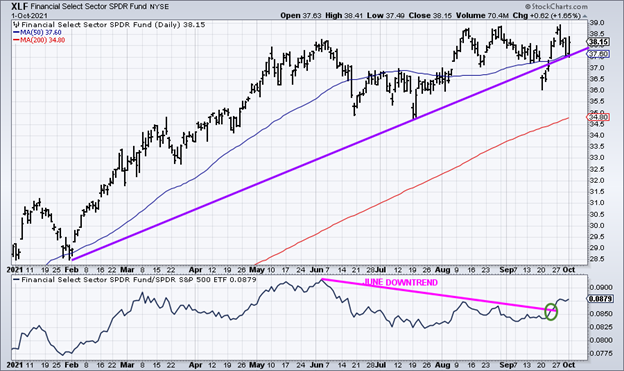 XLF (top chart) was weak in September, breaking the February uptrend. With weekly negative divergences (chart not shown), I thought money would flow out of financials. However, sparked by rising yields, XLF reversed sharply to the upside and look favorable in the near term.

Notice the lower chart. The Financial (XLF/SPY) ratio was weaker than the S&P 500 since June. However, this past week the ratio turned up and broke the downtrend implying Financials are likely to work their way higher and be stronger than the S&P 500. 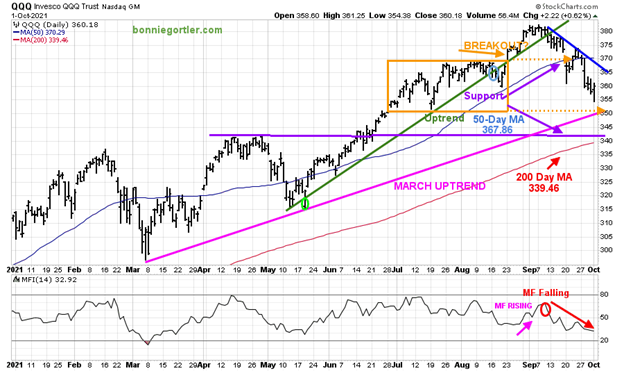 QQQ was under heavy selling pressure falling -3.52% this past week. QQQ is in a short-term downtrend (blue line), not showing any real strength.

Resistance is at 365.00 followed by 370.00. It would be positive if QQQ could break the September downside trendline (blue line). The upside objective remains at 390.00 unless QQQ closes below 350.00. 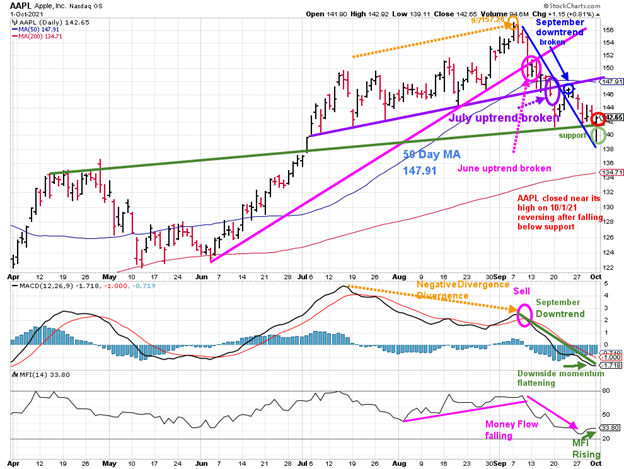 Apple (AAPL) peaked on 9/7/21 at 157.26 (orange circle). AAPL then declined to fall below its June uptrend (pink circle) and below its 50-day moving average later in the month.

It was positive the previous week that AAPL broke its short-term September downtrend (blue line). However, it failed to close above the 50-day MA or above the July uptrend (purple line) and continued lower.

Although there is an improvement, it’s safer to wait for new buys, with the weekly chart (not shown) on a fresh MACD sell and money flow still declining. 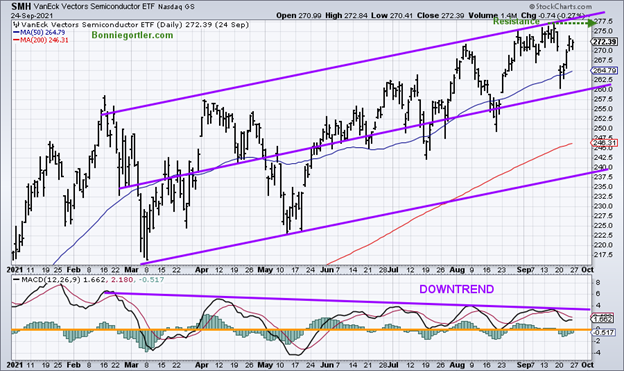 Weakness in Semiconductors (SMH) was a clue to last week’s weakness in the overall market, down -5.84%. (SMH) have not yet broken out to the upside in price or momentum.
MACD, lower chart is on a sell, not yet oversold, below 0. Until Semiconductors begin to show leadership, the risk is high. 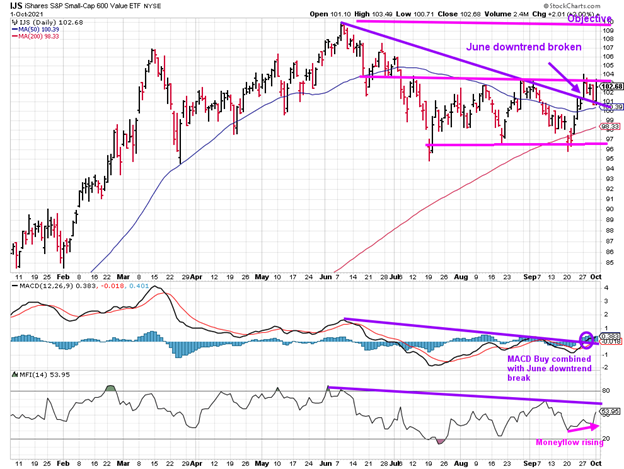 The iShares S&P Small-Cap 600 Value ETF (IJS) tracks an index of small-cap US stocks that provides exposure to the US small-cap companies that are considered undervalued by the market relative to other companies. The top sectors are Financials 34.09%, Consumer Cyclicals 16.41%, and 14.62% Industrials with the largest holding of the fund only 1.39%.

After back-to-back small-changed weeks, last week stocks fell sharply last week as the S&P 500 had its worst September since 2011. The Nasdaq and S&P 500 had their worst month since September 2020. Friday, the first trading day of October, was a different story. Stocks reversed off their lows and closed near their highs with Transports, Small Caps, both Growth and Value, and Financials leading the market higher, deflating the bears. Small caps show signs of improving relative strength compared to the S&P 500. Semiconductors and Technology need to show some leadership to confirm that the rally will continue in the short term. Uncertainty remains economically and politically.  Expect the high day-to-day volatility to continue as earnings season begins.