State of the State on Gold, Banks, Dollar, and the Stock Market

How many risks are there to the market right now? I can’t count, says Jeff Greenblatt of Lucas Wave International.

I’d say we should call October the month of the black swan but if any of these conditions lead to the market getting hit, will it be a surprise? The surprise is financial markets aren’t thousands of points lower. But it is what it is.

In recent days, my inbox has been flooded with reputable sources talking about the potential of supply chain breakdowns, China launching several dozen fighters over the Taiwan airspace to name a few. In case you haven’t heard, it seems Evergrande isn’t the only financial problem in China. CNBC reported two additional property developers are failing to make bond payments. One is called Fantasia Holdings which missed a $206 million payment and trading has been halted since September 9. What happens when nations need a distraction to their own problems? A little conflict over Taiwan could do the trick.

I forgot to mention Congress and the President are still wrestling over raising the debt ceiling this month. The mandates are causing thousands to lose their jobs. We’ve never seen anything like this in the history of the republic. Doesn’t it feel like we are in a race to the bottom?

If Larry Pesavento happens to read this, many kudos to him for reminding us to trade them as we see them. That’s what I’m going to do. Markets have been staying up for the most part due to the fact the Fed backstops every industry they deem to be essential. First of all, I’ve seen many articles attempting to gauge where the market is headed. Here’s my two cents. The transports and housing sectors are down. Tech has been hit lately. But there is one key sector that stubbornly refuses to quit. That is the banks as represented by the BKX. The BKX managed to survive last week’s interesting Gann calendar vibration. Now there’s a new one forming where the range to the low is 19.39 while the latest high coming in on Tuesday which was the 193dg vibrational day of the year. That’s important but even more important is the reaction to it. It is off the high and it may or may not be something bears can build on. But our takeaway is the market is likely to go where the banks go.

Gold suddenly has a very interesting setup where the low on August 9 was the 137dg vibrational day of the year. The latest pullback stalled with a nice short covering candle with a slash line of a 73% retracement but the inverse is 1.37. For those of you who are new, I’ve adopted a baseball term called the slash line (used to grade a batter’s performance) where I take the retracement and inverse of that. Most traders are only looking at the push back leg against the bigger leg. What we do here is also measure the bigger leg against the smaller leg. So, in this case the 1.37 replicates with the larger Gann reading from August 9. It is setting up. The higher probability is it goes higher. The lower probability is this fine-looking vibrational setup doesn’t hold and precious metals goes down the drain. Interesting how Bitcoin is doing better at the moment. 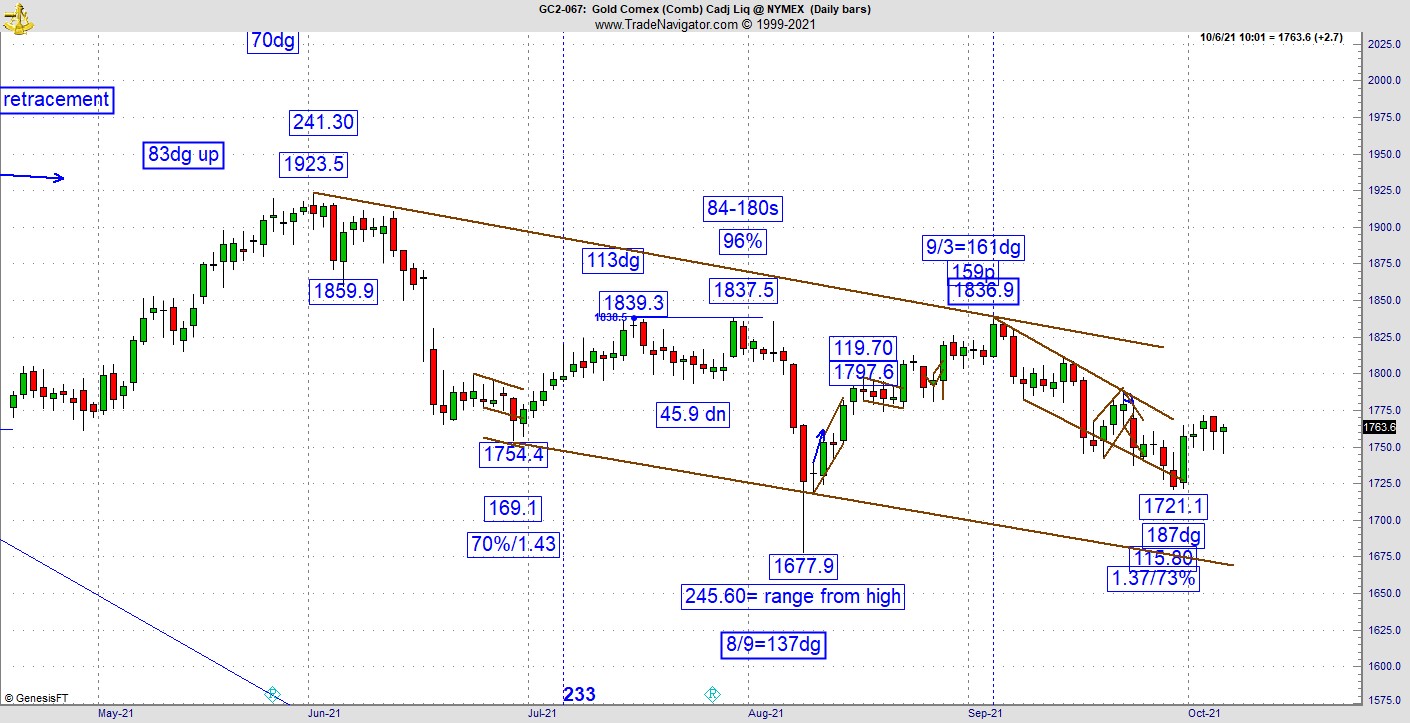 That gets us to the US Dollar which refuses to quit but is continuing to retest major resistance as I’ve called out recently. The pattern has not revealed its hand yet, but conditions are ripe for a turn this week which has been just as elusive as the BKX rolling over. So those of you who are looking for signs the market may have bottomed on the seasonal change point, we can’t rule that out either. The Dow’s low is September 20, but the NDX kept going. Right now, it has stalled right on the trend line which has connected the dots from the March low. Notice I didn’t put up any numbers on this chart because a picture is worth at least a thousand words. In healthy markets both good and bad, it’s the NDX that is the real leader. That is suddenly materializing. 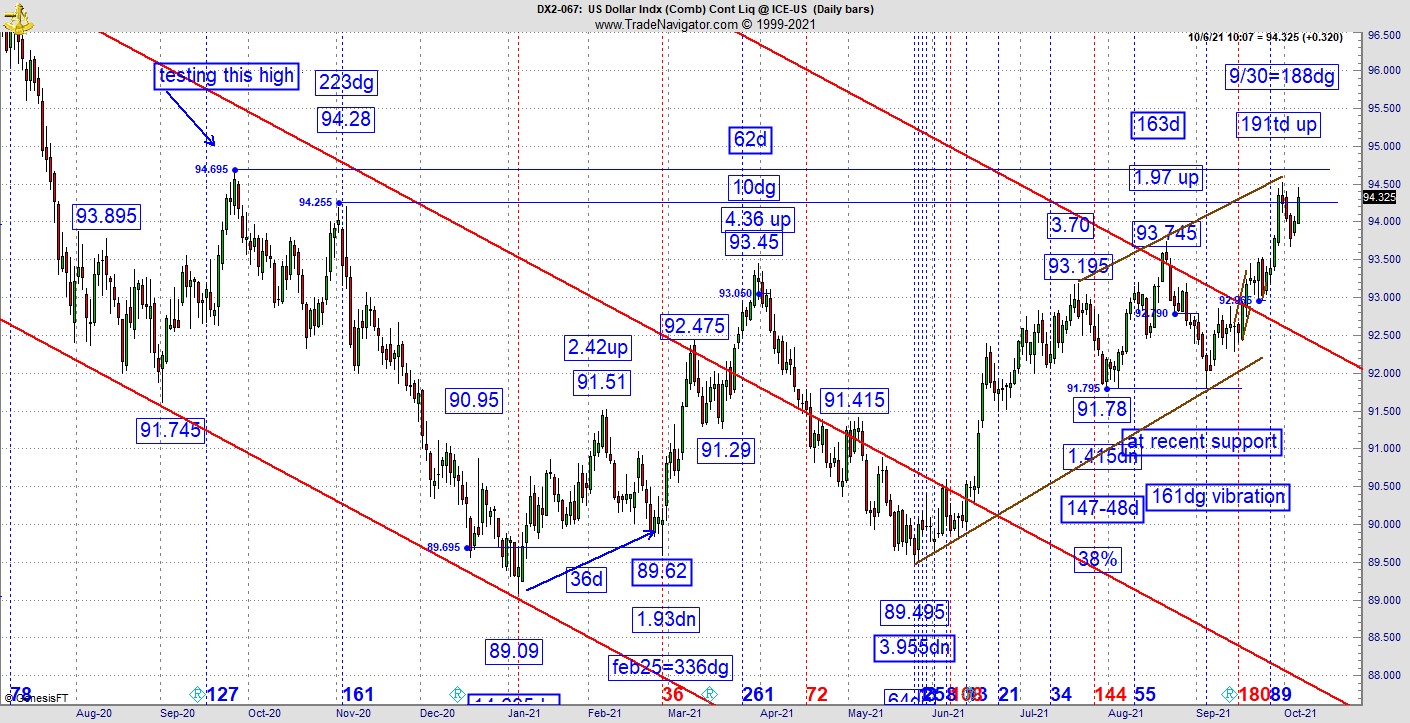 If the BKX gets another distribution day from here, if gold starts moving up on bad economic news, the NDX is likely to be toast. 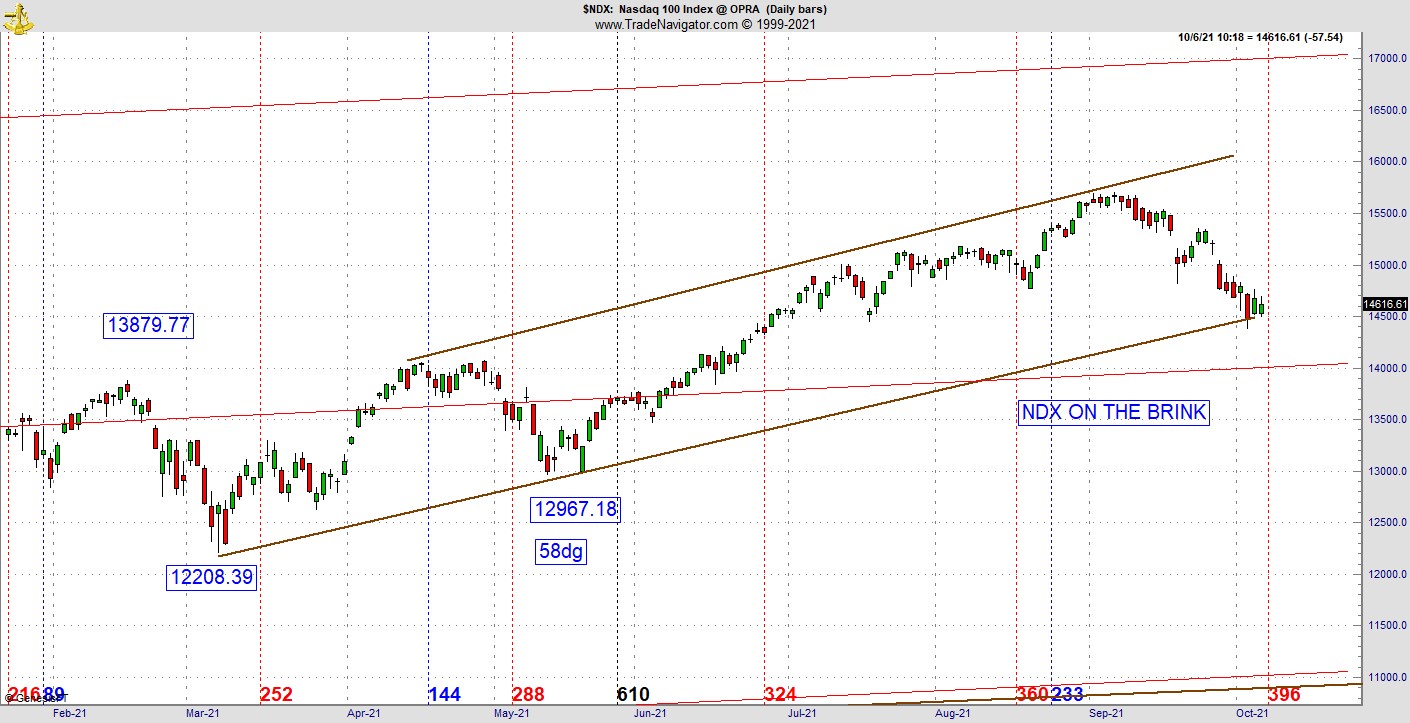 This is how close we are. A handful of charts sitting on or near inflection and if they happen to pick the narrow road of woe, the mood of the crowd could quickly turn to lamentation. By the way, we haven’t heard much from the bond market this week. Do you think one wide-range red bar on the daily would do it? If the stock market reacts to another down day in bonds the way they did last week, it would take the NDX and banks with it. You can guess the rest. Let’s hope the dam can hold the building floodwaters.