Where Are We in the Market Cycle?

Lately, I’ve started to notice many signs suggesting we are now well past the peak in risk appetites, states Jesse Felder of The Felder Report.

To begin with, Citi’s panic/euphoria model, developed by Tobias Levkovich (and renamed in his honor after he sadly passed away last weekend), is a terrific visual representation of this phenomenon. In the early part of this year, it soared to a new high, taking out the high put in just over 20 years ago, at the height of the Dotcom Mania. It has since rolled over from that peak although it remains in extreme territory. 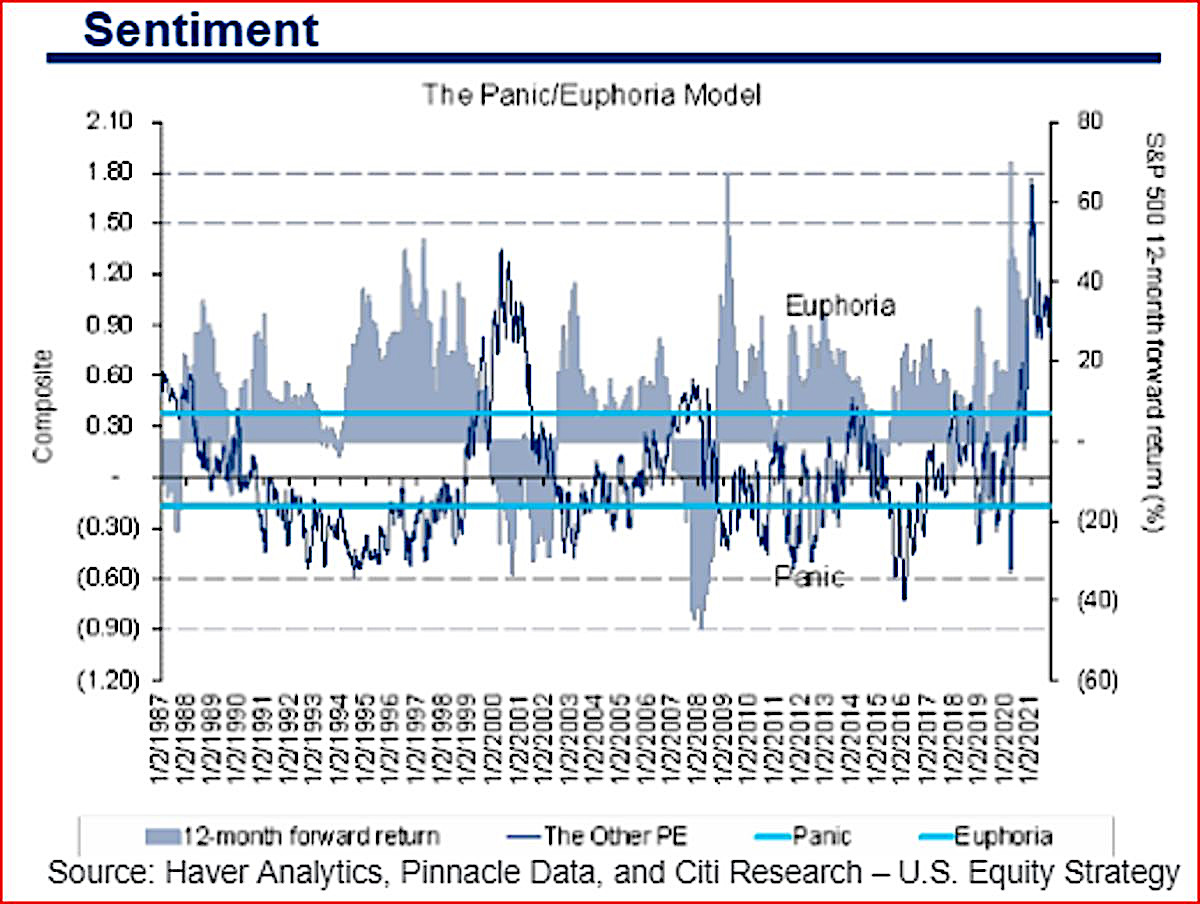 The popularity of Robinhood’s trading app is another important indicator. Bloomberg reports, “Robinhood’s app downloads, a proxy for account openings, fell 78% in the third quarter compared with the second, said JPMorgan analysts, citing tracking data from Apptopia. Daily active users plunged 40% during the period.” Animal spirits have clearly sustained a damaging blow in recent months; whether that blow proves fatal, though, will be revealed in time.

The fact that interest in day trading is plummeting stands in direct contrast to the fact that interest in getting help for stock-market gambling addiction is soaring. The Financial Times reports, “Felicia Grondin, acting executive director of the Council on Compulsive Gambling of New Jersey, said… her group’s 1-800-Gambler helpline has received an almost 50% increase in calls related to day trading since the start of the pandemic.” This would seem to suggest we have moved from the party stage to the hangover stage of the mania.

Perhaps the greatest beneficiaries of the party stage of the mania were Chamath Palihapitiya, self-proclaimed SPAC King and Cathie Wood, manager of the Ark Innovation ETF (ARKK). Palihapitiya has taken full advantage of animal spirits by launching a number of SPACs this year from which he has personally profited to an almost unbelievable degree. Similarly, Wood’s popular ETF has garnered a great deal of speculative assets recently, attracting nearly $10 billion in new money last year alone. 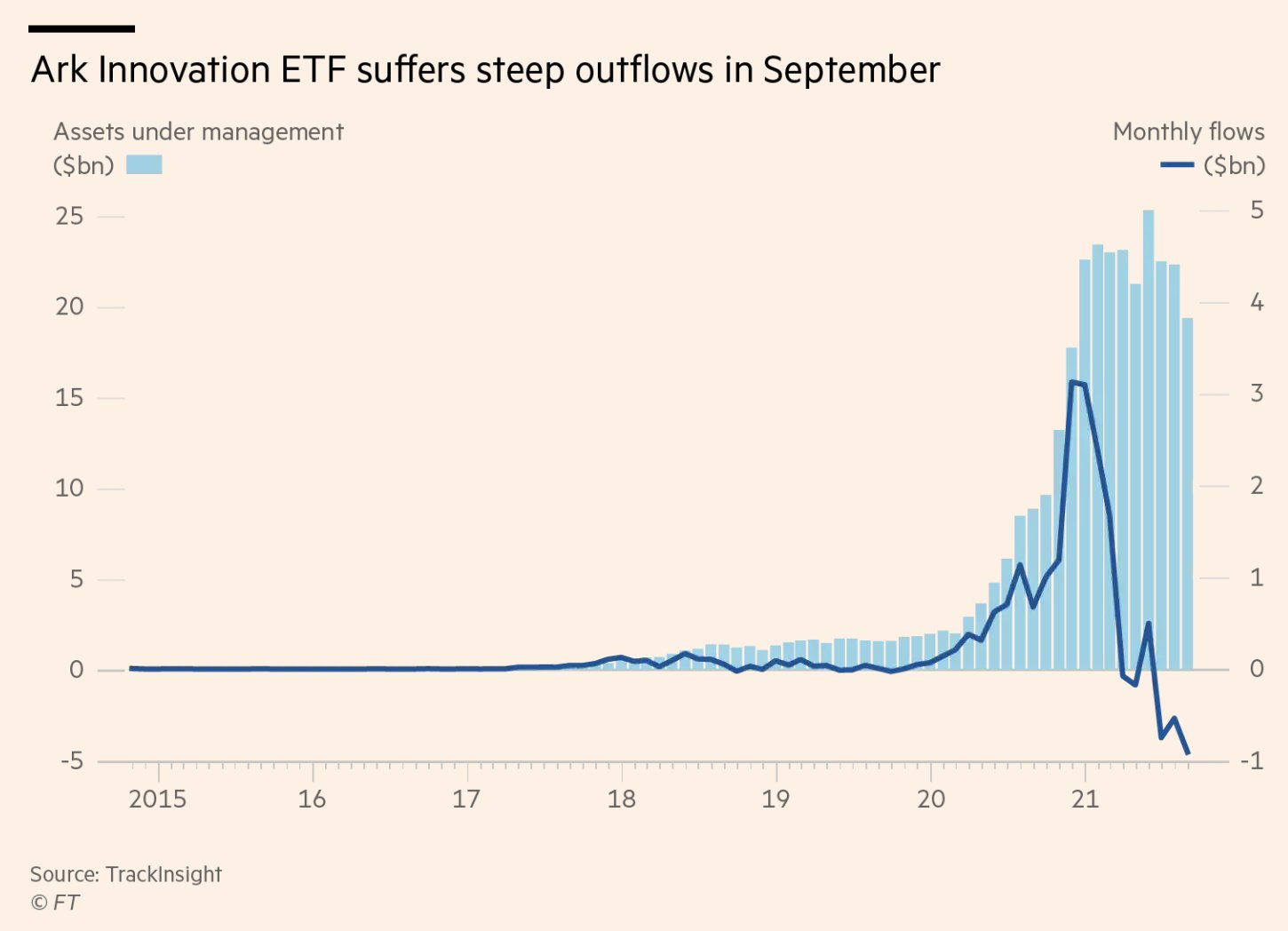 However, as my brilliant friend, Peter Atwater, pointed out last week, Google searches for “Chamath” and “Cathie” peaked back in January and February of this year, at the very same time that many of these other indicators were in the process of peaking. As for Chamath’s SPACs, SPCE trades 64% below its February peak, OPEN is off 39% from its own peak put in the same month and CLOV is off 74% from its peak set back in June after an SEC investigation was disclosed.

Similarly, investors have switched from shoveling cash into ARKK to pulling out nearly a billion dollars last month alone. And if history is any guide, it’s likely just the beginning. Julian Brigden tweeted a fascinating chart last week comparing the performance of ARKK to the Nasdaq 20 years ago. The resemblance is striking and implies ARKK is on the verge of giving back all of its astounding gains made over the past couple of years. 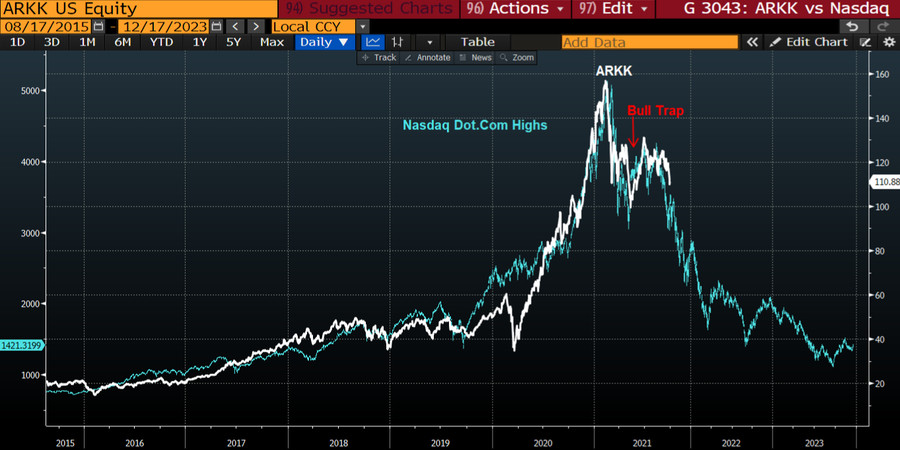 Perhaps more importantly, it also suggests we now find ourselves in the October 2000 stage of the market cycle and there are some important similarities between then and now to support this thesis. Back then, it was becoming increasingly clear that March of that year represented the blow-off in sentiment. Stocks managed to hold up for another five or six months before officially rolling over into the bear market that saw dozens and dozens of the most popular stocks in the market fall 90% or more.

Of course, history doesn’t repeat but it may be rhyming right now. In other words, we shouldn’t expect the market to follow the Dotcom Bust script word for word. We should understand, though, that there are a ton of signs pointing to a very specific stage of the broader market cycle. That would be well past the “euphoria” stage, into the “anxiety” stage, headed for the “denial” and “fear” stages which mark the official onset of a bear market.